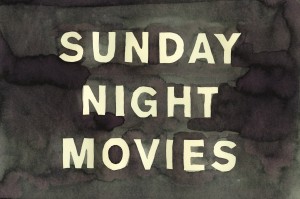 A cozy house, a good movie, a full stomach, a glass of wine, loved ones nearby, all bathed in the patina of the past; this is the picture brought forth by Sunday Night Movies, the latest work by illustrator Leanne Shapton. All dark inky splashes and impressionistically rendered gazes, this small flip-book of black and white watercolors of film stills, free of contextualizing text save, at the back, the list of films Shapton draws from, conveys both the rich, floating feeling of sinking into a dream and the flickering flash of fragmented memories. The book is not so much about movies per se, as it is about a particular relationship with watching movies.

Shapton’s works are distinguished by tight, surprising conceptualization. There’s Swimming Lessons, an illustrated memoir about competitive swimming; Important Artifacts and Personal Property from the Collection of Lenore Doolan and Harold Morris, an auction catalogue that tells the story of the birth and death of a relationship; and Was She Pretty?, a collection of portraits of the imagined exes of a lover, among others. Each of these books is a carefully constructed work of visual narrative that opens up a particular corner of emotional experience and realizes it through images functioning in equal partnership with words, drawing from both as needed. Shapton is a great illustrator not simply because she displays capability with pencil and brush — although that she certainly does — but because each of her works proposes an entirely new way to tell a story. We typically think of illustrations as images that are subordinated to text, but in Shapton’s work, illustration functions in tandem with narrative so as to reveal the stories embedded in the stuff of life: in moments, objects, spaces, and other material, presented and depicted with the utmost care.

Flipping through Sunday Night Movies, I was on the look out for a beginning and end, for a thread to pull from start to finish. But Shapton uses her film stills to present a particular relationship with movie watching, rather than a reshuffled narrative pastiche. About a third of the images included are opening credits: titles, actor’s names, the Paramount logo, etc. This affects a sense of anticipatory suspension, sustaining that addictive moment at the beginning of a film when you know the next couple of hours are going to be spent in passive, media-consuming repose. The title, Sunday Night Movies, refers, of course, to a time of the week reserved for the quiet enjoyment of cinema. This is the time that’s intentionally saved for communal leisure: uneventful and predictable, every week we watch a film together. It’s that particular feeling of anticipation on the brink of satisfaction that might lead one to watch 6 episodes of a television show in one afternoon, but when it’s set aside and shared it becomes wholesome and nourishing rather than indulgent. And then it’s that particular moment of expectant relaxation when one’s Sunday night movie watching routine is at its sweetest. The movie is about to start, the movie is about to start, the movie is about to start. 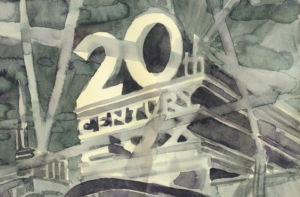 Interspersed with these credits are stills of individuals in moments of contemplation and pairs of people in embrace or conversation, focusing attention on the quiet, uneventful moments of the selected films. These are the moments when nothing much is happening, save a thought being thought, or a feeling being felt, the quiet electricity of minds spinning and time passing. As we sit in the dark and contemplate things, we see others, reflected back at us, sitting in the dark and contemplating things.

Of course, it’s not just any movies from which Shapton draws her stills. Most of the films included were made before 1975, and all of them were shot in black and white. These are good movies — Godard, Fellini, Antonioni, Woody Allen, Philadelphia Story — beloved classics of mid-century cinema. Someone better versed in film history than I am could perhaps glean a more complex relationship between the selected films. But what I perceived most strongly was an overall sense of nostalgia for an unpolluted art form; not flashy, not trashy, not cheesy or melodramatic or messy or obnoxious. I was impressed with images that could be focused on and with which I could spend quality time.

However appealing and relaxing this slowed down and focused relationship with images might be, it comes with a sense of longing for a media-environment past that gets at the bit of gloss that runs through Shapton’s projects. Her evocative and beautiful artworks are pervaded by a sense of submersion in aesthetic comfort, surrounded by soft, well made, well chosen things. As such, Sunday Night Movies is a very lovely book that is likely to be most at home gracing tasteful coffee tables along side other objects of inoffensive interest. It functions as a safe space for those overwhelmed by the cacophonous image saturation of our time, and this nostalgic bent of Shapton’s work sometimes feels overly cozy. 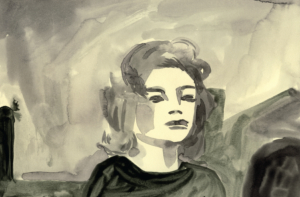 But although Shapton’s aesthetic is somewhat conservative, her predilection for lovely things burnished by the passage of time does not render her capacity with illustrated narration any less powerful. Her works might skate around the rough and the ugly, but they enact the process of story telling in an utterly distinctive way. Sunday Night Movies is about time spent watching movies and the attendant emotions and memories, and as such clearly emerges from the author’s personal relationship with movies. These are the films Shapton loves, and in her book she creates around them a space of peaceful, understated awe — recalling the relationship many people have with their most closely held works of art. Shapton doesn’t so much narrate as conjure, alchemically molding reality out of pencil, paper, and paint. Sunday Night Movies, one of Shapton’s smaller and simpler works, is expertly and meticulously assembled so as to realize an absolutely specific experience with an accuracy that exposes the universality of that experience.