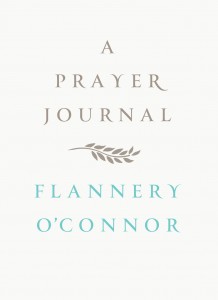 Flannery O’Connor: one of the great American writers of the 20th century, a champion of the short story, a devout Catholic. This last role is often appended to descriptions of her work as a minor oddity; many readers are initially struck by an apparent dissonance between the raw violence and morally ambiguous characters of O’Connor’s work and the fact of her Catholicism. But to treat O’Connor’s work fully and authentically requires confronting her serious religiousness, which she felt was inseparable from what she had to say as a writer. In a response to reviews that she felt misunderstood the complex darkness of her collection A Good Man is Hard to Find, O’Connor wrote, “The stories are hard but they are hard because there is nothing harder or less sentimental than Christian realism.”

A Prayer Journal shows the thoughtful Christian behind the genius artist, and it sheds new light on the great writer’s faith, her work, and her sense of herself. Jotted down in a standard Sterling notebook from 1946 to 1947 while a student at the University of Iowa, the entries in the journal take the form of love letters to God. They are a more personal alternative to traditional liturgy. Within the journal itself, she describes it in contrast to a work of theology:

My dear God, I do not want this to be a metaphysical exercise but something in praise of God. It is probably more liable to being therapeutical than metaphysical, with the element of self underlying its thoughts. Prayers should be composed I understand of adoration, contrition, thanksgiving, and supplication and I would like to see what I can do with each without writing an exegesis.

In a manner strikingly reminiscent of Augustine’s Confessions, O’Connor spends much of the journal beseeching God to come nearer to her, or rather to help her break through the obstacle of herself so that she may reach Him. “I do not know you God because I am in the way,” she writes. “Please help me to push myself aside.

O’Connor’s faith, though steadfast, is not without its doubts. Immediately after characterizing her project as “more liable to being therapeutical than metaphysical,” she clarifies her view of therapy in this context. She writes, “I can feel a warmth of love heating me when I think & write this to You. Please do not let the explanations of the psychologists about this make it turn suddenly cold.” The threat of merely psychological explanations of the feelings of faith and religious fervor — a constant presence in her academic life — plagues O’Connor throughout the journal. She does not dismiss such arguments outright; on the contrary, they beckon her seductively. This causes her to question her own steadfastness and intelligence:

At every point in this educational process, we are told that [faith] is ridiculous and their arguments sound so good it is hard not to fall into them. The arguments might sound not so good to someone with a better mind; but my mental trappings are as they are, and I am always on the brink of assenting.

She claims that the force preventing her assent is genuine faith, and she begs God that this be so. “Dear God,” she writes, “I don’t want to have invented my faith to satisfy my weakness. I don’t want to have created God to my own image as they’re so fond of saying. Please give me the necessary grace, oh Lord.” These moments of her struggle with faith and reason, preserved as if in amber, reveal the real O’Connor, disarmed, yearning, and human.

A Prayer Journal is worth reading simply for its value as prayer and poetry. Unsurprisingly, her sentences are pristine, her images profound. Amidst the striking lyricism stand moments of raw matter-of-factness. O’Connor reveals herself as self-conscious and humble. “I would like to be intelligently holy,” she says near the end of one entry. “Can’t anyone teach me how to pray?” she asks at the conclusion of another. Believers and nonbelievers alike can appreciate the weight of O’Connor’s meditations.

The journal has value, too, in the glimpse it offers into O’Connor’s explicit reflection on her work’s relationship to her faith. In the pages of A Prayer Journal, we see O’Connor struggle with the artifice of art and with her own vanity. She connects the “literary” with the insincere: “Writing is dead. Art is dead, dead by nature.” Throughout the journal, she struggles against her own cleverness. “But I do not mean to be clever although,” she admits, “I do mean to be clever on 2nd thought and like to be clever & want to be considered so.” She longs to imbue her “dead” writing with the living presence of God, and she is clear about seeing the value of her fiction in its role as a vehicle for God’s self-revelation:

Don’t let me ever think, dear God, that I was anything but the instrument for Your story — just like the typewriter was mine. Please let the story, dear God, in its revisions, be made too clear for any false & low interpretation . . . Please don’t let me have to scrap the story because it turns out to mean more wrong than right — or any wrong.

It is clear, though, that she longs for an artist’s success in a simple, human sense, too. She beseeches God to let this happen, though she claims she does not deserve it: “Please help me dear God to be a good writer and to get something else accepted.” But, struggling against her own vanity, she ties this desire of success, too, to a loftier goal: “Please let Christian principles permeate my writing,” she begs, “and please let there be enough of my writing (published) for Christian principles to permeate.”

“I would like to write a beautiful prayer,” O’Connor says in one radiant moment, “but I have nothing to do it from.” Perhaps counter to her own expectations, she succeeds in this task of writing a beautiful prayer — and in so much more.  Alongside ethical questions about the posthumous publication of works never meant for the public, there is a concern that the printing of great authors’ letters, diaries, and journals distracts from the appreciation of their work proper. But A Prayer Journal is far from a mere curiosity; it is a piece of great literature in its own right.