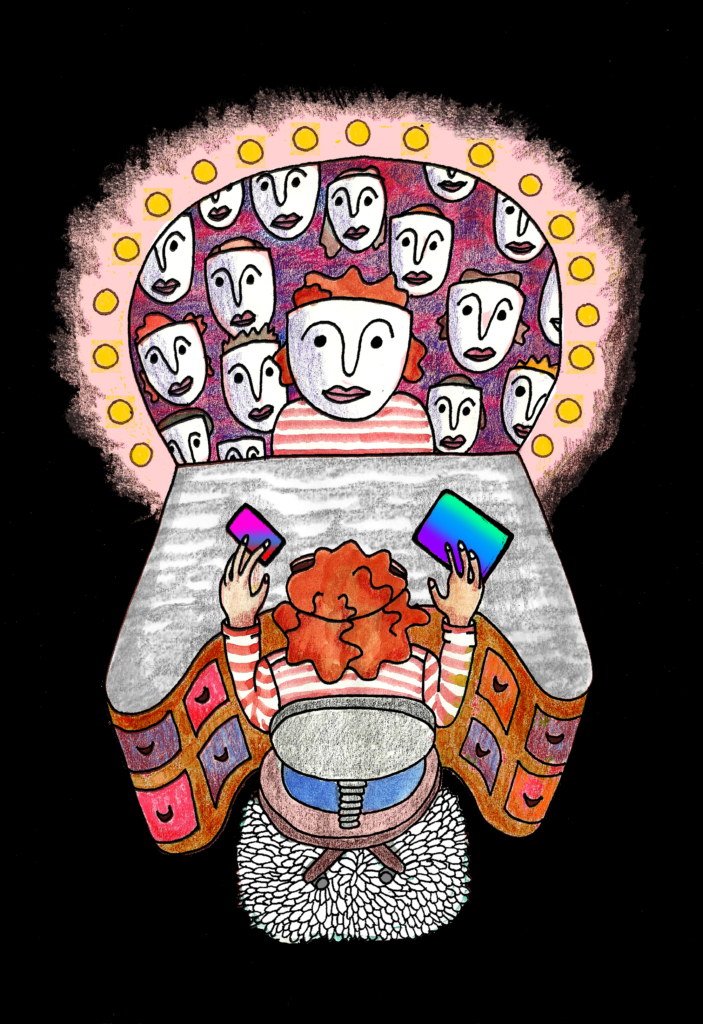 More disheartening than the revelation that the United States government spies continuously on its citizens, or that ground meat comfortingly labeled “100% British Beef” is laced with ground horse, the moment we learned that what everyone thought was a robot avatar algorithmically producing the truth of our time was actually a crafted performance might constitute the greatest disillusionment of the year. As Twitter user @leoncrawl put it, “the one thing people thought wasn’t — couldn’t be — pandering to them, actually was.”

Before we knew that the presumed spam-bot Twitter feed @horse_ebooks was the very intentional project of a couple savvy young men, the phenomenon was charming because it appeared as mathematically amalgamated brilliance, the scrambled run-off of human thought, entailing no perception or manipulation of an audience.

In a recent post for The New Inquiry, Rob Horning muses on why we might be so eager to receive messages from robots, rather than humans. Horning asks, “What is social media if not an ongoing effort to prove our humanity to everyone? To prove we exist.” For Horning, this means we have a hard time conceiving of our own existence without putting it on display. And beyond simple proof, the kind of transparent self-representation we all encounter and enact on social media makes it impossible to wade through tweets, status updates and sentimental photographs without deconstructing the motivations of those friends and acquaintances with whom we share these vaguely intimate digital spheres.

Horning writes, “when we are dealing with everyone else’s posts on social media, we have to expend considerable effort figuring out what their angle is in posting it,” arguing that because we see self-curation playing out in the absolute minutiae of our online lives, it becomes difficult to imagine that there’s anything more to anyone’s life than that perpetual, moment by moment exteriorization of self. The next step is that all others appear so apparently constructed that we begin to desire alienation. Automated thought, because the motivations are obscure, becomes comparatively mysterious, honest and real. We want desperately to believe that @horse_ebooks is a robot because otherwise it’s just another person with an agenda we can’t help but attempt to understand.

This cycle of observation — me thinking you thinking you through me — brings to mind Miranda July’s most recent project, “We Think Alone.” July invited nine distinguished individuals of the arts and sciences — including Lena Dunham, Kirsten Dunst, Kareem Abdul Jabar, and theoretical physicist Lee Smolin — to share twenty themed emails with her (“An email about money,” “An email that gives advice,” “A sad email,” etc.), which she is now releasing to inboxes all over the world every Monday until mid-November. July frames the project as both a voyeuristic glance into the inner lives of the participants, as well as an exercise in self-portraiture, and a means of capturing how we use email to communicate. But “We Think Alone” has caused a lot of people to ask: What kind of intimacy are we actually encountering in reading these emails?

Michelle Dean writes in Flavorwire, “I keep wondering, as the story unfolds each week in my inbox, if it’s going to get to the part where it feels like it has the insight, the surprising cast of light, I usually expect from an art project.” On Art F City, Paddy Johnson and Corinna Kirsch lament the fragmentary nature of the emails we receive from July, because “That’s not how intimacy occurs over email. It requires an exchange. Here . . . you’re supposed to let the email wash over you.”

Indeed what’s perpetually confounding about “We Think Alone” is that while the project is meant to provide an unguarded peek into the intimate existence of other human beings, it is impossible not to interpret the participants’ decisions over which emails to share, and then encountering their emails becomes not so different from reading their Twitter feeds, and no less curated. Just like on Twitter, some people are extremely open with personal information (Lena Dunham, of course), some people keep on message, meticulously building a respectable personal brand (Kareem Abdul Jabar), and some are simply uninterested in sharing details about themselves (Kirsten Dunst). But this does not mean that Lena Dunham’s emails are actually more personal than Kirsten Dunst’s on the whole, and it does not mean that Kareem Abdul Jabar is constantly giving a pep talk to all those with whom he corresponds. Miranda July, in her description of the project, writes that “Self-portraiture is quietly at work here,” but what’s frustrating about “We Think Alone,” is that the role of self-portraiture is actually not so quiet.

Trying to understand what is so unsatisfying about “We Think Alone,” I started culling my own emails, putting together the collection of twenty that I might have shared with July had I been a participant myself. The process quickly became a vortex of competing desires and intents.

Will I share the email I sent to my former roommate about the deposit money I owe her from our landlord, with the belabored explanation of why I’m going to draw it from my British bank account and not my American one, or does that expose my nitpicky nature too obviously? Maybe I should include an email to my dad asking him to help me pay my student loans; then I will appear a sympathetic representative of my indebted generation. If I am going to share a letter giving advice, should it be one of me being a supportive friend (“You are a champion w/ or w/o GRE, no need to lose sleep!”) or giving directions (“Take the train to Clapham Junction, then from there to Harrow-Wealdstone, and we’ll pick you up at the station.”) Which one is more personal? It depends on who’s reading.

Not only is it exhausting to sift through one’s own correspondence — a hotbed of kind and unkind emails sent and received, exchanges you wish you had deleted, exchanges you wish hadn’t ended — but then to choose what it would be alright for someone else to see entails a level of self-consciousness that is nearly unbearable.

At times, reading my weekly “We Think Alone” compilations, I thought Kirsten Dunst ungenerous for sharing only images of her high profile art purchases and her and her mother’s matching shoes, and I found Lena Dunham in comparison almost heroically ready to distribute her most intimate exchanges out into the world. But Lena Dunham has built a public life out of sharing what’s personal, and she is fully aware of how writing to another person means seeing yourself through their eyes.

Dunham writes in a letter to her boyfriend that she sends emails to friends while traveling in order to think of them thinking of her traveling, and that this is often how she enjoys her travels. This kind of recursive circle of self-observation projected onto others has been magnified to an extreme degree by things like Facebook and Twitter, but it is actually a basic part of how we understand each other and ourselves. In such a context, the feeling of intimacy arises when one doesn’t having to struggle through these calculations and awarenesses — which is why @horse_ebooks is comforting to encounter, and comfortable to interact with. When Rob Horning writes that our collective disappointment at the human subjectivity behind @horse_ebooks indicates that we want to be alienated, I wonder if that’s actually right. Maybe it’s actually the opposite, and what we really want is just to peel back some of the layers of projected self-observation we are confronted with at every turn. We want to know what it’s like for others to “Think Alone” and unwatched because we want to feel the closeness that can be accessed outside these cycles of self-crafting.

But humans have always had a hard time thinking about how they think. The conception of the homunculus emerged in the sixteenth century in order for us to deal with this problem: Who am I? How do I think the thoughts that I think? Well, the simple explanation is that there’s a little man in my head, he thinks those thoughts that I think, he operates my body, and he is my consciousness. The homunculus helps us to confront the basic limits of our capacity to be aware of the causal forces enacting our thoughts. In other words, even in our own heads we cannot quite conceive of thinking alone.

Miranda July explained to The Rumpus, that she chose the title “We Think Alone,” because email is “something where you do your end of it totally alone, and you can make it perfect.” But when I write an email to my mother, I am thinking with my mother, and what she will think when she reads the words that I am writing. This is the only way I conceive of communicating with her. Her consciousness is there, conjured up in mine. But this is where the actual intimacy of correspondence emerges. When I write to my closest friend, the process of thinking through her is easy, because I understand how she understands me, and I feel that I understand her. I don’t have to bridge very much cognitive distance to see myself through her eyes. But if I am writing to the general public, the process of thinking through this abstracted hive mind is much more complicated. It becomes tiring, it becomes nearly impossible.

The normalization of exposing our personal thoughts to the world on a minute-by-minute basis, the over-presence of other people’s personal thoughts — a phenomenon that “We Think Alone” contributes to — creates such a confounding compendium of other imagined subjectivities through which we suddenly find it necessary to think, that thinking becomes exhausting. If only we could think alone.

And then a world full of bots appears as a relief.