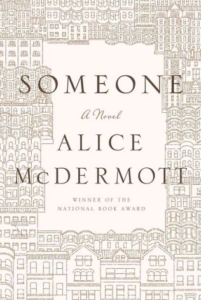 The work that Someone, Alice McDermott’s first novel in seven years, most reminds me of is Brooklyn, written by Colm Toibin in 2009. In Brooklyn, Eilis, a young woman from small-town Ireland, reluctantly immigrates to mid-20th century Brooklyn at the urging of her mother and sister. There she finds work and love. In Someone, Marie, the daughter of Irish immigrants living in early- to mid-20th Brooklyn, grows into womanhood and finds work and love. It’s not the geographical or even cultural commonalities, though, that connect McDermott’s quietly brilliant novel to Toibin’s. It’s the shared disposition of their protagonist: both are almost unbearably passive, unbearably lacking in concrete desires, unbearably hammered into shape by the circumstances of their lives. Eilis and Marie are both, in other words, terribly ordinary.

Marie makes it clear, in her evenly-paced first person narrative, that she was never the prettiest girl in the neighborhood — her first boyfriend leaves her, he cruelly tells her, because he has found someone better-looking. Nor was she the smartest — she cedes that title to her best friend, Gerty. Indeed, Marie defines her character primarily on the grounds of what she is not, or what she will not be or do. She refuses to learn how to cook as an adolescent, claiming that if she can do it she’ll have to do it. She won’t even apply to, never mind accept, jobs in Manhattan as a young woman, preferring the comfort of her native borough. When her much-beloved father is dying, Marie hides in the hospital waiting room rather than sit by her father’s bed alongside her mother and brother. If anything sets Marie apart from other people, it is her complete aversion to confronting any difficulty, to developing any talent, skill, interest, or hobby; by the novel’s end, the only things I know Marie likes are reading the newspaper and stability.

So why would anyone possibly want to read a novel about her, or about Eilis, who lacks even the will to refuse?

For Toibin, the interest lies in examining how life stories are formed: Brooklyn traces a short but essential span of Eilis’s life, those few months and years when all the significant decisions regarding her future are made — mostly by others, occasionally by herself. And then the novel softly ends, leaving the reader with ample evidence to guess how the rest of Eilis’s biography will or would shake out.

McDermott takes a more expansive approach to vivifying a life of no particular note. Her narrative covers the entire arc of Marie’s years, from the moment of her birth to the frailty of her advanced old age, in individual moments of varying length. The moments are not presented in strict chronological order, though she gives more about her childhood early on and more about her adulthood later. But the moments do unfold with a certain natural logic: one moment suggests something that makes Marie think of the next, and the next, and the next. Sometimes the reason for the link is immediately apparent; sometimes it only becomes clear a several anecdotes later.

The life decisions, so important to Toibin’s narrative, matter less to McDermott than impressions and details. Marie describes the intricacies of her first encounters with her future husband, but she almost entirely excludes the proposal and wedding — the moments of decision and commitment — from the narrative. On Marie’s first day of work — at a job her mother has decided she should take — Marie’s new boss, a local undertaker, tells her to buy five new dresses on his department store account. This unheard-of luxury dazzles her, and decades later Marie’s daughters roll their eyes at the mention of “five new dresses” because their mother has told the story of them more times than they care to remember.

Particularities like these, McDermott’s novel suggests, comprise a person’s life — they transform “anyone” into the enigmatic Someone of the novel’s title. The word “someone” is, appropriately, at once anonymous — not tethered to a specific name or individual — and special: someone is not another one, not any of the others. Someone’s best single sentence might come just a few pages into it:

“All human eyes are beautiful, but Pegeen’s were very black and heavily lashed and gorgeous now, with the sparkle of her joke, or her plan, or, perhaps, her vision of some impossible future.”

“All human eyes are beautiful:” has a truer statement been written? We humans are designed to appreciate and adore the visual sensory organs of our fellows, even, as in Someone, the blind and mustard gas-scarred eyes of Bill Corrigan, who sits on a chair in front of his mother’s house every day. We appreciate even more the eyes that we know, the eyes whose stories are familiar to us, as in the case of Marie’s frankly plain and awkward neighbor Pegeen, who will the next day tumble down a staircase to her death.

In Pegeen, an ordinary story becomes extraordinary, its inherent beauty revealed by familiarity. Through the ubiquity of death, which permeates and shapes Someone, the extraordinariness of grief becomes ordinary. When Marie starts working for the undertaker, he tells her nothing is worse than a mother burying her child — this catastrophe represents the height of human suffering. Yet within months of working at wakes, Marie grows accustomed to the sound of a bereaved mother’s keening: it has become ordinary to her, a reminder of how common extreme tragedy is.

Someone is not a tragedy, though it has tragic strains — like the despair of Marie’s brother, a brilliant, thoughtful ex-priest of ambiguous sexuality — nor is it a comedy, though it has comic strains — like the antics of her chatty, relentlessly lovable husband. It is an indefinite, undercooked, mostly predictable but still delicious mix, just like life itself, and for that reason I gulped it down. Some readers won’t like it. They will say it is too quiet, not stylized enough, old fashioned, boring. They have a point: Someone does not want to be loud, flashy, trendy, or exuberant, and readers only interested in books with these qualities should look elsewhere for entertainment. And Someone is taking on the very old fashioned task of representing, as closely as possible, the way one ordinary, even bland, old woman represents her own life to herself. But it twists the task in an innovative way: by presenting Marie’s life in gorgeously realized anecdotes, the novel makes you understand that you, too, are constantly writing your own life, just as Marie has written hers, and that you might be more ordinary than you usually like to think yourself.

Consider: after the traumatic birth of her first child, Marie — one of the most passive characters in recent literary history — remembers with pride that her mother once called her “bold piece of work,” and the memory of the phrase emboldens her to have sex with her husband despite her doctor’s interdiction against having any more children. Characters are built on moments like these.

In fact, I take it back: readers who crave flash should try Someone too, if only for the solitary eruption that illuminates the novel’s last chapter before burning back down into silence and darkness. If this chapter doesn’t astonish you with its image of the infinite anxiety of the human condition, the precariousness of existence, the difficulty and necessity of loving, the epics and comedies and tragedies and elegies embedded in every mundane, pedestrian life, then you probably shouldn’t be reading novels.