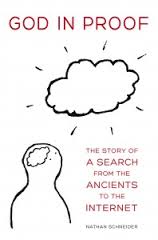 There’s something peculiar about the lengths to which brilliant minds have striven to prove or disprove God’s existence. For modern Americans, who can hardly come to consensus on even empirical issues like evolution or global warming, it’s hard to imagine an ironclad proof or disproof of God’s existence shifting people too much from their prior ideological commitments. To make matters worse, there’s considerable doubt about whether an ironclad proof is even possible. Augustine of Hippo, who declared that “we are too weak by unaided reason to find out truth,” had to resort to a notion of an “inner truth,” backstopped by God, that could allow us to accurately reach toward knowledge. Modern secular thinkers have no such tidy recourse. As philosopher of mind Paul Churchland puts it, “Human reason is a hierarchy of heuristics . . . invented at random, and . . . selected for within a very narrow evolutionary environment, cosmologically speaking. It would be miraculous if human reason were completely free of false strategies and fundamental cognitive limitations, and doubly miraculous if the theories we accept failed to reflect those defects.” If thinkers as far-flung as a contemporary theorist of neural networks and a Latin Church Father can agree on the limited human capacity to arbitrate metaphysical concerns, what purpose, then, can such proofs serve? Why are humans compelled to construct them?

Nathan Schneider offers an answer in his odd, compulsively readable, and genre-crossing book, God in Proof. Purportedly a survey of proofs of God, from ancient philosophy to the present day, Schneider mixes together philosophy, memoir, journalism, and a good bit of sociology to get at a fundamental question: not, “Why is there something rather than nothing?” but rather, “What role do proofs of God play in human life?”

For the author, the story begins with his own movement toward religion. Raised by secular parents, Schneider converted to Catholicism at 18. As a teenage seeker he wasn’t motivated by a logical formula but by a different kind of ‘proof,’ one inchoate enough that he can’t even write it down in any communicable form other than to say it “has never become much more than a possibility and an expectation, [though] that hasn’t kept it from commandeering my life.” This first ‘proof’ drove him to the study of religion and to all the other proofs that populate this book. Thus, as he takes us through the Greeks and the Scholastics, through Wittgenstein’s On Certainty and Hegel’s Lectures on the Philosophy of Religion, Schneider infuses these philosophical and theological accounts with the drama of his own internal struggles.

At first, Schneider is drawn to proofs as pure abstractions, an approach demonstrated in an early chapter centered around the 12th century Islamic thinker Abu Bakr ibn Tufayl. Ibn Tufayl wrote the first philosophical novel, Hayy Ibn Yaqzan, in which the titular hero grows up on an island where he lives alone since birth, a sort of Robinson-Crusoe-from-infancy. Hayy manages, without any contact from other humans, to prove God’s existence through systemic rational inquiry. The appeal of such a story has proven timeless. As Schneider writes, “our truest selves live on islands — so goes the mythology — because they’re free from all the junk of society, with it’s distractions and phonies and stale dogmas.”

Yet as Schneider gets older he develops an interest in the context in which these proofs were formed. Schneider’s training as a journalist comes to the fore here. After taking us through a tour of the culture wars following Darwin, the man Richard Dawkins claims “made it possible to be an intellectually fulfilled atheist,” Schneider moves on to the pieces philosophers picked up from the rubble. Though this section also deals with prominent thinkers, most notably the analytic philosophers Alvin Plantinga and William Lane Craig, Schneider is more interested in how their work functions in the overall culture. So while we get Plantinga’s modular logic version of the ontological proof and the “free-will defense” of theism, we also get the formation of the Society of Christian Philosophers, developments in modern physics that give new life to teleological proofs, and the establishment of the Templeton Foundation by the billionaire investor John Marks Templeton. This foundation gives away $70 million a year in order to act as a “catalyst for discoveries relating to the Big Questions of human purpose and ultimate reality,” and its impact is such that there’s an ongoing scholarly debate over the ethics of philosophers accepting Templeton money. Setting aside whether such movements are corrupting influences or are helping further valid intellectual pursuits, these new players on the Proof scene have clearly changed academia. As Schneider writes:

In just over two decades . . . the number of medical schools with spirituality in their curricula went from a tiny minority to a solid majority. Researchers who before could expect little more than paltry grants for a sabbatical started overseeing multimillion-dollar projects that brought together physicists, philosophers, neuroscientists, and theologians to study such topics as “Godly love” and “eschatology from a cosmic perspective.

At the other end of the spectrum is what Schneider calls “the Proof Industry.” These are the popularized arguments for and against God, advocated by the likes of C.S. Lewis and Richard Dawkins. An apotheosis of sorts for this approach is Ray Comfort, of Living Water Publications, an evangelist who achieved brief internet fame for a video in which he claims the banana is the atheist’s nightmare, a testament to intelligent design insofar as its ridges are perfectly suited to the human hand and its stem on the top seems custom-ordered for easy opening. Much like the New Atheists, who rush past proofs of God’s existence with more scorn than philosophical rigor, Comfort has only a passing interest in proofs in and of themselves, since his main concern is proselytizing. As he tells Schneider, “There’s the legitimate addressing of the intellect . . . but it’s up to you whether or not you want to waste your time spending hours arguing with someone, or whether you want to show them God’s forgiveness.” For this kind of thinker, Schneider writes, “proof is a trick. It keeps a certain self-styled intellectual type of person in the conversation. Let them have a proof, or two, says Comfort, if that’s what will make them pay attention to the fate of their souls.”

If that’s all these proofs and disproofs are — a series of tricks to get people to accept or reject religious commitments — then they’re a fascinating series of tricks. Wittgenstein may have been right when he consigned metaphysics to being a subject “we must pass over in silence,” but Schneider amply shows that proofs of God offer much that is revelatory, even if they say more about the humans who form, argue, and take solace in them than they do about the God who is their ostensible subject.