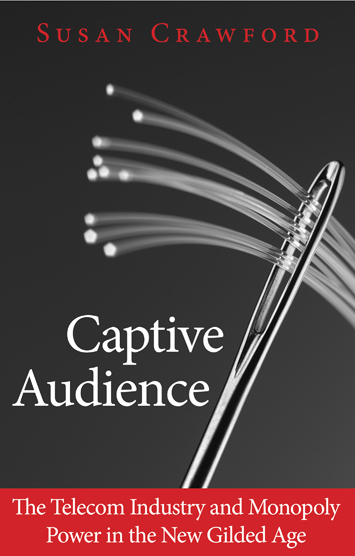 “America needs a plan. The incumbents have their plan, and it is working well for them. But it is not working for the rest of the country.”

The statement above appears at the very end of Susan Crawford’s recent book, Captive Audience: The Telecom Industry and Monopoly Power in the New Gilded Age. Crawford, a former science, technology, and innovation adviser to President Obama, takes the cabal of cable to task, singling out Comcast especially as a dangerous behemoth threatening to stifle the growth of American high-speed Internet access.

The marriage of content and conduit is Susan Crawford’s bête noire: by increasing its market share in the former field, Comcast now has the leverage to crowd out all of its competitors in the latter. These days, as Comcast and Time Warner divvy up regions of the country in an implicitly collusive tour de force, the oligarchic Internet service provider (ISP) landscape is dominated by companies whose core business was once cable television.

For a consumer, the cost of buying TV and Internet together in one package is usually lower than purchasing only one or the other. This is intentionally so: like Microsoft’s tie-in of Internet Explorer to the Windows operating system, Comcast intends to use its TV assets as leverage to prevent customers from defecting to other ISPs. Of course, this ploy can only work if Comcast’s acquisition of NBC Universal afforded it control over sufficiently addicting exclusive content to keep its client base from straying.

Enter NBC Sports. Explains Crawford: “Live sports is the one thing that people can get almost nowhere else – not on DVD, not online – the only options are pay-TV or a stadium seat…In an era of disaggregation and fragmentation, watching cable sporting events is a shared pastime.” Rupert Murdoch, no stranger to media tycoon-ship, once described this reality as a “battering ram” for live sports content providers: he who owns live sports will quickly control much else besides.

Indeed, although a 1992 law (the Cable Television Consumer Protection and Competition Act) mandated cable providers to license their programming to satellite companies to increase competition, Comcast evaded this requirement by “using a loophole in the legal structure for programming, which was interpreted by Comcast to mean that cable operators did not have to give satellite companies access to programs that originally came to the cable provider over a wire in the ground.”

In short, Comcast’s competitors – such as the hapless RCN in Philadelphia – were left out in the dark on live sports, even for local teams. And given cable customers’ adamancy that live sports be included in their packages, this arrangement virtually guaranteed market supremacy for Comcast in the United States. The outcome? Ever-rising cable subscription rates, Internet speeds that lag behind much of the developed world, and an utterly neglected rural clientele.

The consumer as loser is nearly a meme at this point, so thoroughly has the Great Recession imprinted its insignia on the wearied American mindset. Nevertheless, Crawford warns, the consolidation of the American Internet access bottleneck is particularly worthy of hand-wringing. As other advanced economies like South Korea and Japan rocket ahead in embracing fiber-optic connectivity – complete with 1Gbps symmetric data speeds that remain incomprehensible to most Americans – the United States finds itself in the humiliating position of aiming for a minimum national broadband speed of 4Mbps (download-only; 1 Mbps upload) by 2020.

Underlying this technological angst is something deeper, more primal. It is the sense that some right, however virtualized, is being denied by the cartelization of the American telecom space. It is the realization, further still, that our international peers are enjoying the fruits of their justly obtained lightning-speed access while those of us holding American passports are condemned to the endless purgatory that is YouTube’s “loading” spin-wheel.

It is not merely the inability to attain a world-class Internet connection that offends our egalitarian sensibilities, however. The cycle of subscription hikes chasing subscription hikes threatens consumers with the prospect of being priced out of their preferred programming. It is true that, in a narrow intellectual property sense, these shows are clearly owned by the networks and studios. But the millions of fans forking over large portions of their paychecks for their slice of cable TV have justifiably come to see them as their own. 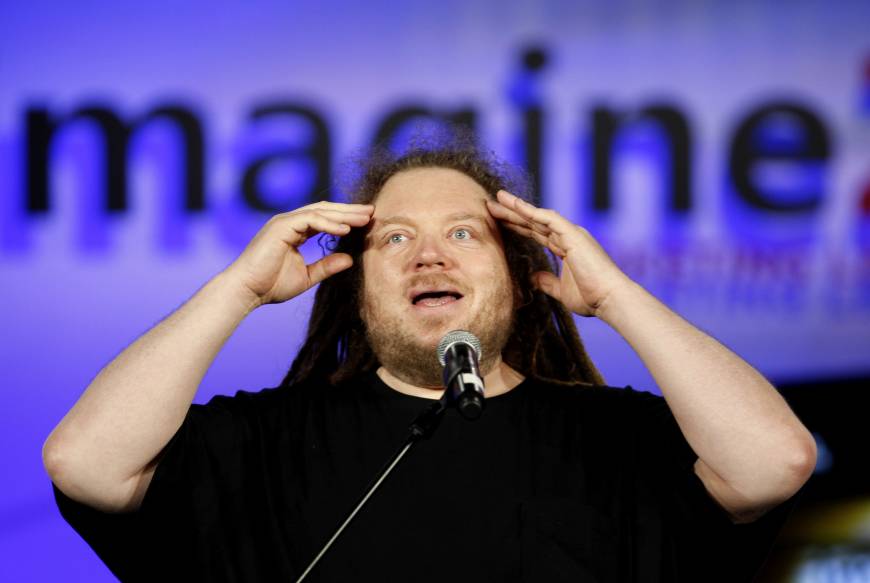 While Americans’ entitlement to the images that populate their TV screens may constitute phantasmal ownership at best, the monetization of citizens’ personal information by yet other titans of technology surely amounts to wholesale theft. So argues Jaron Lanier, anyway, in his recent treatise, Who Owns The Future? A no less loopy successor to his first book, You Are Not a Gadget, Lanier’s latest contribution to the “future of technology” canon argues forcefully against the winner-take-all model of data aggregation.

Google and Facebook fulfill for Lanier what Comcast provided Crawford: the archetypal villain. “An amazing number of people offer an amazing amount of value over networks,” Lanier explains. “But the lion’s share of wealth now flows to those who aggregate and route those offerings, rather than those who provide the ‘raw materials.’” In exchange for monetizing our “likes,” shares, and constant location updates en masse, Facebook et al. offer the use of their platform.

That is not nearly enough, Lanier argues. Instead, a better economic system – what the author dubs “humanistic information economics” – would utilize micropayments every time a user’s data segment is monetized by anyone else, from large corporate entities like Facebook to the neighbor down the street. This would kill the free economy, yes. But, according to Lanier, conceptualizing the use of Google, Facebook, Twitter, and so on as cost-free is actually an illusion: we acquiesce to being spied on in order to gain access to social networks filled with our own data.

What particularly worries Lanier is the natural endpoint of such a system: the mass aggregation of personal information is transforming outcomes in the digital economy from a bell curve-shaped distribution to a winner-take-all formation. The large networks sit at the top and virtually everyone else begs for scraps. (The rare Rebecca Blacks of the world fit ably into the niche formerly occupied by lottery winners, inducing enough false hope to keep the game going while disguising its mathematically-assured inequities.)

When Lanier reminds his readers that “capitalism only works if there are enough successful people to be the customers,” one can almost hear the faint echoes of Occupy Wall Street. More relevantly, given the nation’s widely documented descent into inequality, one recognizes the reality in Lanier’s portrayal. Massively concentrated wealth is, of necessity, a transient phenomenon: in the long run, even the rich benefit from a broader distribution.

Perhaps Lanier’s strongest point arrives in the form of his differentiation between big data’s use in science versus its counterpart in business. In the former case, although a “scientific method for big data is not yet entirely codified,” it is generally accepted that data is useful if it leads to an advance in our understanding of the real world. The world of business, however, is a very different one indeed: “People pay for dating services even though, on examination, the algorithms purporting to pair perfect mates probably don’t work. It doesn’t matter if the science is right so long as customers will pay for it, and they do.”

More damaging, yet covered only briefly by Lanier, is the natural human instinct to conform one’s own behavior to that of a machine, rather than the other way around. “An example of social engineering is when two people meet through a dating site because they both expect the algorithms to be valid,” Lanier writes, later adding: “The science of it becomes moot.”

This conundrum raises the question of whether big data, as used in business, is destined to become useless eventually. As its use permeates all aspects of our lives, and as we therefore increasingly rely on data-driven algorithms to guide our own habits, it will become ever more difficult to tell whether human behavior is informing machines, or vice versa.

Unfortunately, Lanier’s proposed “universal micropayment” model leaves far too much to the imagination. Although he deflects numerous opportunities to delve into details by waving the “too early” wand, the vagueness of his vision appears to doom it to irrelevance in the realm of public debate. This is particularly agonizing because the problem he decries is so very real.

Lanier’s book title, Who Owns the Future?, speaks to his uncertainty about the path of an economy driven increasingly by “off-the-books” contributions to social networks. Susan Crawford is thoroughly preoccupied by crises of the present age. But while Lanier is at times frustratingly big-picture and Crawford is just as exasperating in the opposite direction, the two coalesce in their focus on information ownership and what it means for human freedom.

It is, of course, reasonable to have trouble getting agitated over the mounting costs of watching a New England Patriots game or the latest episode of Mad Men. But as Lanier aptly demonstrates, fretting over the present is simply a less frightening alternative to looking ahead. The picture in both cases is dismal, with the primary difference being one of degree. Substantively, the cable industry’s slowly intensifying stranglehold on its customers is the very type of incremental shift that, amplified by Lanier’s short jaunts into the future, menaces the entire digital economy.

In a talk at Columbia University earlier this year, Crawford expressed frustration at the inability of most Americans to fully comprehend the enormity of their connectivity gap in relation to other advanced countries. For a deficit that affects virtually every American (excepting perhaps only those few connected to fiber-optic networks), this collective myopia doesn’t bode well for our ability to dodge the dismal future foreseen by Lanier.

In this year’s film Iron Man 3, Tony Stark finds himself in Chattanooga, Tennessee. There, while attempting to connect to the Internet, he grows frustrated with the agonizingly slow data transfer speed. The depiction is paradoxical: Chattanooga was actually the first city in the United States to offer Gigabit-speed fiber-optic bandwidth. But the confusion soon dissipates: in a later scene set in Stark’s workshop, a Verizon FIOS logo is prominently visible in the background.

It appears, then, that Crawford was quite right to declare that the incumbents have a plan. Whether Lanier’s counterattack is a salvageable response remains to be seen.

Jay Pinho is a freelance journalist and a recent graduate of Columbia University’s School of International and Public Affairs.