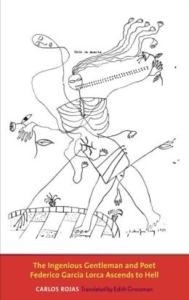 In Carlos Rojas’s The Ingenious Gentleman and Poet Federico García Lorca Ascends to Hell, now in English translation by the venerable Edith Grossman, Lorca ruminates on his own death from the other side of it, stuck in a spiral of empty theaters that comprises Hell. Lorca meets the aged self he might have been (just as the eponymously referenced ingenious gentleman Quixote does) had he not been executed by Nationalist forces in 1939 for being outspokenly liberal — and possibly for being, though somewhat more abashedly, queer. Rojas’s Lorca contemplates his end on a dusty roadside; he argues with the phantoms of his killers; and he chases his thoughts in seemingly endless spirals much like the one he is stuck in.

The milieu into which Rojas’s novel was originally born was quite different from the one into which it arrives now, in English. When the novel came out, in 1980, Spain was in transition away from a dictatorship that had lasted four decades, since General Francisco Franco and his Nationalist forces won the Spanish Civil War. Franco had died in 1975; his designated successor, King Juan Carlos I, had begun a transition to democracy that included the new constitution of 1978 and laid the groundwork for the ascension of the Spanish Socialist Worker’s Party in 1982. In 1980, Rojas’s Lorca might have appeard in the public consciousness as a reminder of one of its dark moments, and a warning not to return to it. As Rojas’s novel reemerges, now in English, Spain finds itself in another transition, again into an unknown future, as it gazes around and tries to find its balance in the aftermath of economic collapse. Perhaps this Lorca appears yet again to serve as a floundering country’s guide into an unknown future.

And yet, despite the promise offered by any parallels of situation, something about Rojas’s novel seems deflated now. I followed the ideas, the philosophical questions, and some of the references, but I just couldn’t locate the book’s animus. Its basic premise — this I found quite easily, as it’s very repetitive — is that Hell is unending consciousness, “absolute memory”, much to Lorca’s horror. This is only remarkable if you know Lorca (it turned out my impressionistic memory of his work, left over from a casual, teenaged saunter through the collection I bought on vacation in Granada a decade ago, required supplement; I recommend similar preparation if you plan to pick up this book but don’t know Lorca well). Broadly speaking, Lorca’s work is obsessed with death. His poems churn with premonitions and fears of his own death, and almost a certainty of its premature coming. It resonates when Rojas’s Lorca tells us, “you fear death because you think it means the loss of consciousness,” but in fact, it is much worse: “I never could have imagined, as perhaps no one in the world ever has, that death was in fact a sentence to be precisely who we were, fully conscious of ourselves, through all of time and perhaps beyond days and centuries.”

We accompany our narrator in obsessive iterations of the events and thoughts surrounding his life, his death, and the moral character of Spain. The four sections lead us, at times in first person, at other times in third, at still others in a rush of sentences without periods, through a stew of impressions and memories that are often revised and rearticulated. Lorca talks to his friend Ignacio Sánchez Mejías, a bullfighter; Rafael Martínez Nadal, his friend and posthumous keeper of manuscripts; members of the Rosales family, his friends who hid him before his extermination; Sandro Vasari, Lorca’s fictional biographer, and one of a few of Rojas’s avatars; Lieutenant Colonel Velasco, the acting governor under whose jurisdiction Lorca was murdered; and perhaps most importantly, Ramón Ruiz Alonso, the fascist official who extracted Lorca from his hiding place and denounced him to the military. Rojas interleaves these dialogues with references to and analysis of Lorca’s own work, an element that exists in the novel without clear motivation. In an early scene, Lorca talks about his play The Public to Martínez Nadal:

I’m convinced it transcends our time. I moved writing for the theater, mine included, naturally, ahead by several generations […] The plays of mine that are staged are full of easy concessions. […] The Public is different. I had to demand everything of myself, absolutely everything, and climb down to the center of my being on the ladder into my soul to achieve a play that’s so authentic.

In several passages like this, the novel tilts toward becoming an exercise in expertise. Especially in moments in which the narrator Lorca explains pieces of his work that only he understands, or references he made that no one noticed, it’s hard not to think that these digressive analytical sections, apparently only serving to demonstrate Rojas’s superior perceptiveness, should have been analytical essays, if anything.

The Ingenious Gentleman has its promising and provoking moments, but they are overwhelmed by too much obsessive, diaristic repetition. A poet’s voice is constituted by what is said as by what is not said, and here, the balance feels wrong — too much is said, and too many times. The poet is too available; the repetition elides the magnetism of the unsaid. I’m not sure I need to know this Lorca, not sure he has anything to tell me that his work doesn’t.