What A Day Job Gives You 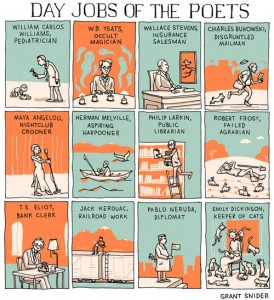 For approximately 5 years, I thought the only way I could simultaneously be alive and be happy was if I was free to write. Free from what, exactly? A day job. That vile-sounding thing. If you type the words “day job” enough times, they start to seem like a sex act. A sex act you do for money.

Being into day jobs is really trendy right now. In April, a great little comic called Day Jobs of the Poets, written and drawn by Grant Snider, made the rounds. In May, Slate published an article by Mason Currey (which contains the annoying phrase “As Nicholson Baker told me,” — usually I like Baker, but I’m currently reading and hating House of Holes), which is also more a well-written list of celebrity author day jobs than a personal essay. I’m proud to say I’ve joined the trend; I’m happy with my day job now!

It took me a full five years to come out the other side of a fevered, desperate desire to permanently get rid of the day job and somehow subsist only on writing. It was only during the first year, however, that I really tried to find some way to do it, some plan or trick that would set me free. Eventually, succumbing to my dull fate, I accepted the fact that I’d probably have a day job forever.  This was not catharsis, it was more like suicidal depression. But the thing I killed wasn’t my body, it was my sense of self–a self I had erroneously decided that I needed to be, or might as well perish.

During those five years, I worked 40 – 50 hours a week, and with the money I earned I paid my rent, bought books, read them in bars where I consumed LA-priced cocktails, and purchased fully 3 pairs of new jeans.  Sometimes, when the night was dark and I was both alone and a little drunk, I’d cry – tears that were both selfish and understandable — about my life unspooling in a tiny office. I totally failed to recognize that while I earned money and tried to figure out how to be, my job also kept me afloat long enough to write a book.

My novel writing process was mundane. I found time to write whenever I was off duty. Mostly, I wrote on Saturdays and Sundays; I snuck in extra writing hours during lunch breaks or on evenings after work. I built a novel out of fragments, slowly piecing them together, until I had a first draft, then a second.

Conventional wisdom about writers hanging onto full time jobs their whole lives emphasizes the structure and regularity a day job affords. Currey argues in his article that you can get more done when you have less time to do it. True enough, but there’s another aspect to the day job that conventional wisdom rarely touches upon: the ability to support oneself during the creation of the work, beholden to no other entity. I know how to write a book while also having a job. I will never need to rely on grants, a university’s funding, a fellowship, or a retreat to fund my writing time. If I lose my job, I’ll find another, and it almost doesn’t matter what it is (not easy, in this market, but doable, because I have a good job history and skill set, and I’m still young enough to seem like a good investment). I’m making the money myself, and I’m in charge of to whom it gets allocated. It’s me. I’m the one who gets it. And every penny coming in will keep going right to me, when I start the second book, and when I finish it.