Love Among the Particles – Norman Lock 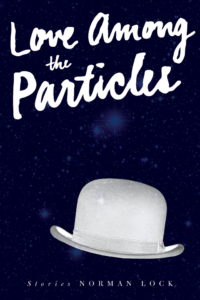 Norman Lock’s short story collection Love Among the Particles has a wonderful sense of literary and historical irreverence. Many of the stories find Lock inserting himself into their fictional worlds, rendering himself one more character in a veritable menagerie of fictional and non-fictional personages of note from Mr. Hyde to Mata Hari. In fact, the stories in this collection feel quite deliberately selected to provoke the reader into an acknowledgement — and hopefully, a studied consideration — of the ineluctable strangeness of existence, in all its historical and fictional glory.

I can’t think of another author who takes such evident, vocal delight in bending the laws of physics and geography (to say nothing of his flouting of various narratological and fictional norms). You can feel the joy leaping off the page in passages like this one in “The Brothers Ascend”: “Dayton had been a pleasant town dreaming slow river dreams in unending sunshine. Before the sun disappeared from the sky. I rode now on my Wright brothers bicycle to the river, to listen to it sing among the stones, and saw Huck and Jim fetch up in a raft.” And Lock not only writes these beautiful flights of fancy into his stories, he crows about his license to do so, offering a lyrical “why not?” to every raised eyebrow in the room:

You shout, Liar! Theirs was the Mississippi River, which is not in Ohio.

I reply imperturbably, Maybe not in any geography book. But the Mississippi that runs through mythology, the Mississippi of the imagination — that river lapped the green shores of Dayton. Was beaten into foam by the brightly painted paddle wheels of steamers. Was — after years of naive sunshine — surprised at the sudden dark.

Such authorial bravado is a tricky tightrope to walk — too much and you risk alienating the reader with your arrogance, too little and they’ll condemn you as a liar. While I found this running commentary off-putting at first, by the end of the collection it seemed an elegant way to pull the reader out of the worlds of Lock’s stories and, by doing so, simultaneously force a closer reading of those same worlds. Calling attention to the artificiality of his creation gives Lock (and us) the chance to consider what actually determines the “real,” and this forced comparison forms the foundation of the stories in Love Among the Particles.

The initially jarring juxtaposition of historical and fictional characters in these stories serves to further blur the line between reality and fantasy throughout the collection. In “The Monster in Winter,” Mr. Hyde makes use of Thomas Edison’s wax cylinder technology to record his grim memoir for an eager reporter, describing in detail his struggle to come to terms with a certain Dr. Jekyll. Huckleberry Finn and Jim come gliding down the aforementioned Mississippi River on their raft, impossibly hop off in Ohio and converse with Mata Hari about the Wright Brothers’ progress on their aeroplane. Lock’s most blatant (and effective) line-blurring occurs in “The Mummy’s Bitter and Melancholy Exile,” where ancient Egypt smacks into the artifice of a Hollywood production. A mummy is awakened and extricated from his pyramidal tomb to be brought on as a consultant for a film based on his life, only to realize that he was actually less lonely in his tomb than in the modern world. In the end, he crawls into the exquisite replica of his pyramid found on set to go back to sleep — in effect, embracing a fantasy only made possible by a construct built specifically as an attempt to mirror reality. Lock is calling attention to the fact that all writing demands this same capitulation from its readers, be it fiction or non-fiction. Stories make their own realities, just as histories do, and Lock’s uniquely intricate understanding of this dynamic is what makes these tales so inimitable.

All of this culminates in a final three-part story, “The Broken Man’s Complaint,” in which Lock takes the audacious step of breaking the first-person narrator down into a collection of molecules that can roam freely through both space and time. At first concerned with what his wife will think when she comes in from her gardening to discover him gone, he quickly gets used to his newfound condition and travels around the world, going to all those exotic foreign locales you might expect someone to explore were money and time no objects. But this initial fascination with the present world passes quickly, and soon the narrator figures out how to travel into the past by accessing a nostalgic power lying latent in various objects he comes across: a collection of Edwardian train schedules becomes his transport back to early twentieth-century Britain, an Egyptian artifact takes him back to ancient Egypt. Upon his return to the present, realizing how easily he can insinuate his particles into various forms of matter, he hops on the internet and crawls his way through the web, losing track of time while gaining seemingly infinite knowledge:

I was in a nearly limitless sea, cold and coldly lit by coruscations of green and blue . . . To enlarge my understanding (essential in the age of information), I had merged the data of my thoughts in the World Wide Web — surfing its countless channels and acquiring by a kind of “spidering” an encyclopedic knowledge of the cosmos, of things vast and minute and, in their sum, beyond the grasp of any one person.

Emerging from this informational gorging a couple hundred years into the future, he finds that the mysterious process by which he had been originally broken down into particles has been not only discovered, but institutionalized the world over. In response to their ravaging of the physical world, almost everyone has had their consciousness stored in giant computer server farms that are maintained by a select few IT specialists who still live outside — and even they are gone when the narrator travels further into the future and reaches the end of entropy (and seemingly time) itself. A potent melange of historical elegy and science-fictional warning whose reach never exceeds its grasp, this is Norman Lock at his best.

Not that he would necessarily admit to it. This particular story stands out in many ways: it’s by far the lengthiest one found in the collection, occupies prized real estate as the last story to be read, and lends its first part’s title to the book itself. But what I find most fascinating is the basic conceit behind the narrator of the story. I keep referring to the collection of particles in the story as “the narrator” because Lock has him go out of his way to maintain that Lock is merely a channel for thoughts that are not his own: “The gist of what you are reading here was imprinted on the mind of Norman Lock, who believes himself sole author of this eventful history.” It’s instantly striking, mainly because Lock has been only too happy to insert himself into many other stories in the collection as a character who can speak for himself. By rendering himself an amanuensis to this unnamed collection of particles, Lock executes an intricate trick: he uses his own estimable creative prowess in service of a story that actively renounces any authorial ability on his part. I can’t think of a more fitting conundrum than that to encapsulate the tension between reality and fantasy that Lock so joyfully manipulates throughout Love Among the Particles — it’s a heady ride that I recommend taking.