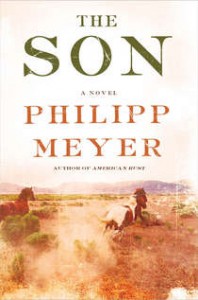 Spanning more than a century and a half, several generations, and nearly 600 pages, The Son slowly unfolds the story of the McCullough family through the voices of three of its members: Eli McCullough, born just after Texas became an independent republic in 1836; his son Peter, writing diaries around the time of World War I; and his great-granddaughter Jeannie, at age 86, recalling her childhood while passed out on the floor of her south Texas mansion in 2012.

The McCullough family has amassed its tremendous wealth via blood, luck, and oil, and the narrative, which is almost always compelling, fixates on these three tropes in approximately descending order of interest. Blood is its primary concern. The novel is relentlessly, dispassionately violent from beginning to end, boasting a body count that swells into the thousands and a scalp count well into the dozens. The massacres start when Comanche Indians attack Eli’s childhood homestead, located on the frontier, while his father is off hunting horse thieves. The Comanches rape, scalp, and kill Eli’s mother and sister and take him and his brother captive. They adopt Eli into the tribe and teach him to shoot an arrow, hunt a buffalo, and scalp an enemy. Eventually, he leaves them and becomes a Texas Ranger, a cowboy, and a wealthy landowner.

If Eli’s story sounds like the stuff of American mythology, that’s certainly what it becomes to Peter, Jeannie, and an expansive cast of McCulloughs and other minor characters flailing to forge identities in the wake of Eli’s über-masculine persona. To his grandsons and the south Texas community, Peter tells us, Eli represents “the pinnacle of manly attainment.” To Peter himself, a bookish type prone to citing Homer and reviled by the town for his sympathy with the local Mexicans, his father’s character deserves less glory than it gets. But Peter’s account is written out of the family tradition by the time Jeannie is born, and she grows up considering Eli a hero and wishing to emulate him in every way. She has the character for it — the narrator of her sections make this clear — but she is born in the wrong body and at the wrong time (Texas is already settled and the McCulloughs already rich) to realize her ambitions of self-sufficiency and self-made success.

Meyer deserves credit for his attention to Jeannie’s struggle to earn respect in the boys’ club of the oil industry while balancing work and family life. But as its title suggests, The Son is at heart a boys’ book. The women are paraded in occasionally, to be ogled, raped, or pitied for their dearth of life choices, and most of them are dropped from the narrative just as quickly. Even Jeannie is a man’s consciousness trapped in a woman’s body, unable to relate to any other women around her.

That’s okay, though — not every novel has to place women front and center. And if the many scenes of intense man-on-man violence — raids, shootouts, battles, hangings — read like a young boy’s thrilled reenactment of his favorite Westerns, then they also make the reader think about the reasons for and consequences of the intense aggression that defined the American West. Meyer is, after all, a hyper-consciously literary author, one of the New Yorker’s “20 Under 40,” and his references to the tradition of male-centric American adventure writing trend higher-brow than spaghetti Westerns. Eli’s account of his rocky return from the Comanches to white settlements, at age 16, strongly echoes Huck Finn’s aversion to becoming “civilized” in Mark Twain’s classic novel. The near-anthropological chapters on the Comanche customs, and specifically on their use of buffalo, recall Melville’s exhaustive exegesis of the whale in Moby Dick. Several elements smack of Faulkner: the chapter-by-chapter change of perspective, the obsession with a single family’s decline over several generations, a barn-burning scene repeated across generations that echoes Darl’s crime in As I Lay Dying, and the perspective of Jeannie, a matriarch whose narrative unfurls as she literally “lies dying” in her home.

Like so many American writers, though, Meyer owes his greatest debt to Hemingway, that literary pinnacle of manly attainment, and The Son occasionally suffers for its slavish adherence to the Hemingway style. Which is to say: flat, detached, affectless, and paratactic, particularly when describing horrific or emotionally intense moments. Now, I’m not asking for violins, sentimentality, or melodrama, but some variation in style would have added fresh texture to the various narratives. One of the pleasures of reading Faulkner is immersing yourself in an entirely new voice, in new cadences, when you begin a new chapter or section. The Hemingway-esque voice works well for Eli’s rugged character, but too often Jeannie and Peter sound more or less the same.

Here’s Eli, for example: “One of them was leading a horse and tied to the horse was the body of the man I’d shot. I hadn’t known he’d died and I got a cold feeling.”

And here’s Jeannie, losing her virginity: “She began to move her hips. It felt natural and it felt like she were breaking some rule and she was happy.”

And Peter: “There were nine of them but the last four gave themselves up and my father stripped the saddle off their horses and found a proper cottonwood and hung them with their own ropes.”

All three voices link clauses of dramatically different emotional timbre with the word and, thereby presenting the mundane and the essential as syntactic equals. This structure requires you to grope beneath the surface of the words and decide which events and actions matter most — to psychologize the narrator. It’s a good trick, and Meyer often deploys it well. But it gets a bit old after 500 pages. Meyer has the talent for originality; I wish he had used it to develop new ways to narrate his many scenes of violence, high drama, and emotional epiphany.

Or he might have just shortened the book. Like many American products, The Son would improve with a shift in focus from quantity to quality. A number of chapters (especially fight scenes) could be removed without diminishing the emphasis on pervasive violence or detracting from the roundness of Meyer’s characters. Reading The Son is a bit like reading Hemingway without the tidy, ironic brevity, or Faulkner without the sick humor, or Melville without the hyperactive comedy of language, or Mark Twain without the sly jokes. In other words, it’s never funny. The novel is terribly aware of its bleakness, but its too hugely unwieldy to have the perspective of itself that is necessary for humor.

That said, Meyer does many things well: he skillfully weaves a centuries-long narrative that unspools new secrets to the last page; he serves a generous helping of beautifully wrought descriptions of Texas and the American West; and he melds utterly accessible language with real concerns about the shape of history, the perishability of peoples, and the subjectivity of morality. His language is fluid, his characters are ample, and his research on the history of Texas and its various inhabitants is impressive. His spotlight on racial troubles — like his attention to gender troubles — is diligent and important if not terribly enlightening. The Son is a good novel, and Meyer is a good writer, albeit too tightly tied to his literary influences to find a distinctive voice of his own. Meyer would do well to take a note from his characters, who look past the myth of Eli’s superlative masculinity and strike out on their own terms.