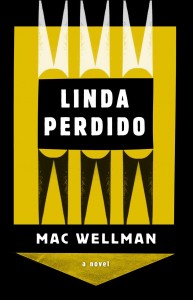 Linda Perdido is a story about wanderers. Not wanderlusts, and certainly not “lost,” but those who wander for the sake of it.

The “Linda Perdido” inside of Linda Perdido is a memoir by Linda’s “good” twin, Qua. Qua recounts, laments, obsesses over “evil” Linda’s vanishing: the day she inexplicably hijacked a Fedex truck and tore off into the horizon, but not before burning down the nearby Catholic school that raised her.

This titular story in fact bookends the plot, as much as there is one, and what lies in between is a vast, rambling, lyrical, surreal, and vibrant ode to the Midwest, or an alternative version known as Set County. Its denizens sometimes become narrators, eccentric and endlessly voluble characters: Spider Getuli and Slow Burn Slipp, estranged brothers finally reunited; David Layman, tirelessly following the flight of the singular Perdido Macaw with its black and gold Mizzou feathers; Khalid, a hapless delivery boy who treks around the blurry world from Set County to New York City’s Lower East Side to deliver a pizza; the Counter/Terrorist, Linda’s erstwhile paramour; and, of course, the twins Perdido themselves.

But the true narrator of Linda Perdido is up for interpretation. Maybe all of these disparate voices belong to one (Qua? Spider Getuli?). Or maybe there is an infinite scope of unnamed narrators, piping up briefly then hiding again, fluid, proxies.

Just as the narration mingles and disperses in roaming, swirling patterns, so do the bounds of Set County. More than anything, this novel is personified by its own intricate geography, creating an elaborate Tolkienesque map peppered with New Gladen, New Marrowbone, New DeKalb, New North Disclosure, New Rome Town, Squinch and Port Squidly, the unpronounceable town of P—, and so on forever. The county is peopled with gems, with the banal, with unassuming beauty. There’s the Nambipewkus River and Gbooop!, fixtures of this world you can’t help but bring to your lips to savor.

Just as Wellman pays tribute to playwrights past with direct quotes from Marlowe and Shakespeare, so does he adopt the posture of a Beckett piece, where the cascade of words ricochet and coalesce into an all-encompassing surrealscape, and not every nugget of content is necessarily meant for full absorption. The reader may attempt to go on a wild goose chase for relation, meaning, and logical conclusion, or she can choose to wander lust-lessly through Wellman’s hazy, visionary terrain. Teeming with history and cynicism, Set County is such a vital landmark that it even has its own moment in the spotlight as Narrator. When it speaks, the entire novel snaps into focus, so ingenious, so inspired, so “of course!”:

Linda Perdido is a story about the ground upon which one wanders.

Though geography is so pervasive throughout the story, Wellman never cements us readers. We cannot create a precise Tolkienesque map in our heads as locations muddle and blend. In this case, Tolkien’s famous adage, that not all those who wander are lost, does not apply: we’re wandering, and we are indeed lost.

And as I read, I continued to be lost. For a good portion of the novel, I was happy to be so, expecting to be found at the end. I wandered through tenuous threads about 9/11 (eerily referred to as Digit Slash Digit Digit), Russian takeovers, spying journalists, navigating those daunting blocks of text delineated by chapters like enormous intakes of breath. But somehow, the white space provided little relief. In Linda Perdido, new chapters do not indicate a change in scene, a shifted perspective, a collective leaving-behind. Instead, they are continuations mid-thought from the previous page, circling ever outward.

Much of the loose and spiraling nature of the storytelling lends itself to a surprising conversational tone amidst the breathtaking imagery and flights of Breadbasket fancy. The beautiful ecstatic mess of text comes riddled with typos, some of which are intentional and some, I’m sure, which are stray errors in my UNCORRECTED PAGE PROOF – NOT FOR RESALE copy. In any case, the elegiac nature of the imagery coupled with the gritty tics of everyday American speech, with all of its spurts and stutters, perfectly showcases Wellman’s deftness and sensitivity to language that has served him so well in the theatre.

The trouble is, this isn’t a play. If I wanted to get whimsical about it, I could say the rich diction was so lively that it almost rang in my ears, but literally, reading’s a visual medium. My brain squinted to comprehend the vibrant and churning content as I turned back a page, re-read another sentence, tripped over a typo, and I couldn’t help but ask those petrifyingly dull questions often asked of challenging work, “Who is this? Where are we? Why is that?”

I read Linda Perdido over the course of a week, and could never comfortably locate what is known as A Good Stopping Point. Whenever I returned to it, the reorientation process was an exceedingly tricky one.

Although, who am I to deserve A Good Stopping Point? An easy read free of excessive brain-wringing? Aren’t I being shown respect, as a reader, by being thus challenged? Am I, frankly, a naïve sort of dweeb, questioning Mac Wellman, a titan of experimental theatre?

Or am I graciously offering him the benefit of the doubt? Wouldn’t such befuddling tangents by, say, an amateur fiction workshoppee, get 1) no doubt and 2) lots of red x’s?

Such is the inner struggle of this dweebish reviewer.

As a reader, my interest generally hinges more on aesthetic than conventional plot and character development. As a reviewer, on the other hand, I must recap plot. Had I been acting as a reader alone, these questions of storyline might have washed over me with a bit more ease. Either way, it’s clear: I became invested in this story, to the point where I yearned for the Perdidos to come more to the forefront of Linda Perdido, rather than just serve as the ends of a sandwich filled with loose threads, which is not only a mixing of metaphors but also probably the worst sandwich.

As it is, I fear casual readers will tire of groundlessly wandering through this novel, tethered, then untethered, and then at the end of the road, not found, still lost.