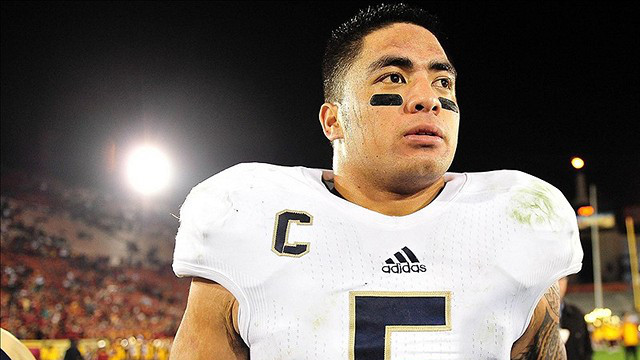 When Katie Couric grilled Manti Te’o on her afternoon talk show a few weeks ago, she seemed determined to get to the bottom of things. She was going to ask the tough questions, and get the straight answers. She maintained a hard-nosed skepticism, responding sharply to Manti’s mild-mannered protestations: “That just doesn’t make sense to me!” and “Didn’t you actually say things that weren’t true, and isn’t that in essence lying?”

Couric had clearly been sent on a mission to untangle the web of deception and then to pin the spinning of it on this golden-hearted football star’s selfish desire for success and fame. But by halfway through the interview, she could hardly maintain her tough critical distance. Flummoxed as she was by sweet Manti’s honestly broken heart, she finally cracked her steely veneer and threw up her hands in dismay: “Either you are the most naïve person on the planet, or this is the saddest story, I think, ever written.”

Manti Te’o might very well be more naïve than most people, but his story is nonetheless sad. If you believe what Te’o says, which I do, then despite the fact that Lennay Kekua turned out to be an amalgamation and not an identity attached to a physical body or a lived life, Te’o nonetheless experienced the death of a loved one, and all of the attendant emotions.

As a sympathetic observer, there is nothing that seems strange to me about the way Te’o behaved. There are plenty of reasons why someone might want to love someone physically absent, why they might accept the near impossibility of actually seeing that person, and why they might be willing to believe the most outrageous stories in order to keep the abstract possibility of a promised future love alive.

In the specific case of Te’o, anthropologist Ilana Gershon has written a detailed explanation in The Atlantic of how the traditions of Te’o’s Samoan Mormon community make sense of a number of aspects of this story. And in his interview with Couric, Te’o described how a shared Christian, Samoan background was an important part of what drew him to Kekua:

“This Lennay person. There were so many similarities… She was Samoan, I’m Samoan. She loved her faith… I’m Mormon, and she knew a lot about that. I found a lot of peace and comfort in being able to talk to somebody.”

But even for those of us not a part of a close-knit Samoan community, is it actually so hard to understand why someone would seek out the soothing sympathy of one who understands them, and why they would not want to let the semblance of that understanding presence disappear?

Interrogating Te’o on why he didn’t come forward with the news that Lennay had contacted him after her supposed death, Couric suggested that if she had been in his shoes, she would have taken the honest route, and explained it all to everyone right away, “I think on December 6th I would have gone to my coaches and said… I have been the victim of a cruel prank. This is not right, we have got to get to the bottom of this now.”

But Te’o didn’t want to get to the bottom of it. He wanted to believe in Lennay, and he was understandably embarrassed and confused. If Katie Couric had fallen in love with a simulacrum of a human, she would probably also not be immediately ready to admit it when the illusion could no longer hold.

Eve Kosofsky Sedgwick, one of the founding scholars of queer theory, critiqued the tendency towards what she termed “paranoid reading” in contemporary academia, writing, “…whether or not to undertake this highly compelling tracing-and-exposure project represents a strategic and local decision, not necessarily a categorical imperative.”

Such a position of fact-finding and plot-revealing is as much a part of contemporary media culture as academic culture, and Sedgwick makes the important, if contentious, argument that we shouldn’t take the need to get to the bottom of things as a given. When Katie Couric asked Te’o, “Can you see why people would view this at worst as a complete lie and at best as incredibly misleading?” she assumed the very act of lying, no matter the circumstances, to be unquestionably avoided.

But do any of us live in a world that simple? Sedgwick writes, “How television-starved would someone have to be to find it shocking that ideologies contradict themselves, that simulacra don’t have originals, or that gender representations are artificial…” or in other words, that the truth is often very complicated.

Maybe we could take a more forgiving stance towards stories like Te’o’s. And maybe we don’t have to choose moral bankruptcy or idiocy as the only possible explanations for how a seemingly impossible story could be believed and a few lies told.