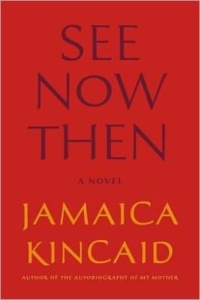 According to its dust jacket, in See Now Then, Jamaica Kincaid’s first novel in a decade, “a marriage is revealed in all its joys and agonies.” Truthfully, it is revealed only in its agonies. We learn early that husband Mr. Sweet thinks of wife Mrs. Sweet as “that horrible bitch who’d arrived on a banana boat.” A composer, Mr. Sweet writes a nocturne called “This Marriage Is Dead,” or, alternatively, “This Marriage Has Been Dead for a Long Time Now.” No corresponding joys emerge.

The moribund marriage is introduced in the first sentence thus: “See now then, the dear Mrs. Sweet who lived with her husband Mr. Sweet and their two children, the beautiful Persephone and the young Heracles in the Shirley Jackson house, which was in a small village in New England.” The setting is contemporary, but this sentence establishes the pastiche style of the novel: mythic and mundane, epic and novel, ancient Greek and present-day American rub shoulders and run together in the telling. In this world some of the Sweets’ neighbors have names like the Georges while others have names like the Atlases; their own mythically named children watch TV and play with Happy Meal toys. Time is elastic and imprecise: a neighbor’s house is “built in a neoclassical-something style that harkened back from another era, long ago.” While Kincaid’s neoclassical-something style borrows from Homer, she also resurrects the multi-colon sentence from its nineteenth-century grave. One sentence has four colons.

Another spans nearly two pages. Kincaid’s sentences have become increasingly long and tortuous since the publication of her first books in the eighties, although she has a knack for frankness that saves them from sounding too maundering. A page-long sentence about the rodent-like Mr. Sweet begins, “And he was not a rodent at all, he was a man capable of understanding Wittgenstein and Einstein and any other name that ended in stein, Gertrude included . . .” The mockery in this sentence belies Gertrude’s imprint on See Now Then itself, with its discontinuity, nonlinearity, and repetition. Not only its pastiche mode but also its grammatically convoluted sentences undermine straightforward notions of time and causality. Look at the construction of another part of that page-long sentence:

. . . these people who wore the same socks days in a row and didn’t dye their hair after it lost the natural color and the luster it had when they were young and they liked to eat foods that were imperfect, food made limp by natural pathogens or insects for instance, people who worried about the pilot light going out of the boiler and the pipes freezing because the house was cold and then the plumber would have to be called . . .

Kincaid withholds the expected parallelism of “who wore the same socks” and “who liked to eat foods that were imperfect,” the satisfying smoothness of “the pipes freezing so that the plumber would have to be called.” Sentences and paragraphs develop in interlocking digressions and recollections, like a puzzle box. The temporal point of narration — the Now — is obscure, but the story is clearly being remembered, and the memory, the “then and now, time and space intermingling, becoming one thing,” unfolds “all in the mind of Mrs. Sweet.” Even as the perspectives shift from one character to another, the story is hers.

Mrs. Sweet is a writer, composing a novel called See Then Now. See, Now, and Then constitute the elements of this story, sliding around like pieces in the shell game, recombined throughout with the relentlessness of a sestina. These pieces are really the elements of storytelling itself, and See Now Then is fundamentally a story about storytelling. At its center, Mrs. Sweet embodies the ancient feminine weaver of fabric and of tales: much of the story is recounted in the course of her knitting a sock, recalling the Fates, those authors of mortal lives, at their loom; the Wife of Bath, a weaver by profession and storyteller by circumstance; Mrs. Ramsay in To the Lighthouse, composing fragments into a whole as she sits over her knitting. (As if to lay to rest any questions of influence, Kincaid playfully alludes to the “Time Passes” section of To the Lighthouse: “The time passed. But did time pass? Yes, it did . . .”) Text and textile are sometimes indistinguishable, as the garment Mrs. Sweet knits becomes the story she writes; for “Mrs. Sweet so liked to live in her garment: the shroud of her past,” which she retreats from her family to pore over in writing.

Like the Fates and the Wife of Bath, this author is vengeful. But the avenger seems less and less to be Mrs. Sweet and more and more to be Jamaica Kincaid. The creeping sense that you’re reading autobiography begins with the correspondence of the Sweets’ circumstances with those of Kincaid’s family. Mr. Sweet, like Kincaid’s ex-husband Allen Shawn, is a short, highly phobic composer descended of New York intelligentsia. (Shawn is son of longtime New Yorker editor William, brother of actor Wallace.) Mrs. Sweet, like Jamaica Kincaid, is an Antiguan-born writer with a tortured relationship to her mother and an obsessive gardening hobby. Both families have an older daughter and a younger son, both live in Vermont, and so the resemblance continues in all details the Internet can corroborate. As See Now Then progresses, Kincaid starts to attribute quotations from her own books to Mrs. Sweet. Eventually she reveals Mrs. Sweet’s name to be Jamaica. And finally comes a moment when Mrs. Sweet “only thought this, she didn’t know with certainty then or now, as she writes this,” apparently sealing the identity between the author and her character.

The implausible dastardliness of Mr. Sweet, then, looks like little more than a bitter indictment of Kincaid’s ex-husband. While Kincaid has warned against reading her fiction as memoir, any reader familiar with her life is bound to wonder how much is invention. See Now Then doesn’t play with the tension between fiction and reality the way, say, J. M. Coetzee’s Summertime does. The John Coetzee of that novel has highly visible differences from the real-life Coetzee (being dead, for instance), and the only person whose reputation it imperils is himself. Not only does Mrs. Sweet align precisely with Jamaica Kincaid’s publicly discernible self, but the only one who really comes off badly is her husband. Every time Mr. Sweet seems in danger of being sympathetic, he says something like, “I see that I never loved you, for you are like walking into barbed wire in the dark, you are like an invitation to a tea party in an ant nest,” or “I wished she minced words, I wish she would bite off her tongue, I wish she would simply become dead.”

The unsympathetic portrait of Mr. Sweet is not just an ethical failure, but an artistic one. Despite the suggestion in the first sentence of hauntings (“the Shirley Jackson house”), See Now Then is not a gothic novel, where the grotesque villain could credibly belong. (The Shirley Jackson of this book is not the horror writer, but the less well-known persona of the author, the long-suffering mother of four.) The accusation of Mr. Sweet that rings through See Now Then chafes against the subversion of time and causation on which the rest of the book insists. The story is at once about the Gordian knot of time, the fact that “Now and Then [are] without difference,” and about Mr. Sweet’s treachery against his wife, the deterioration of their relationship which shows just how different Now and Then are. But perhaps that’s why Mr. Sweet comes off as such a scoundrel: seeing no difference between Now and Then, the tale-teller can only imagine that because he no longer loves her, he must never have loved her. The story is hers alone, and she can’t imagine a humanity complex enough to explain the alteration in his feelings. Whether Mrs. Sweet’s or Jamaica Kincaid’s, this failure of imagination is the novel’s gravest flaw.