The Lathe of Heaven 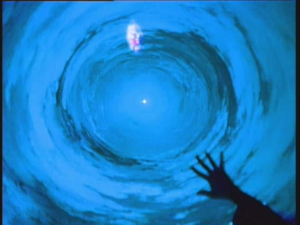 Low-budget television shows from the late ‘70s and early ‘80s have always disturbed me. I was born in 1980 and I think that may be the source of my discomfort. I was either almost alive or barely alive when these shows were first broadcast. They were part of a world that I was part of but had no consciousness of at the time they were made. Many of these shows were shot on what is now badly deteriorated video, which makes them particularly uncanny. Sitcoms from the ‘60s look old to me but are still part of the same universe into which I was eventually born. But the early episodes of Dynasty, with their simplified sound design and muted colors, are part of a world I can’t imagine myself ever actually being a part of.

I thought about this while watching The Lathe of Heaven, a 1980 Public Television adaptation of Ursula K. Le Guin’s wonderful novel about a young man whose dreams form and reform reality. It’s the only film or TV adaptation of her work with which Le Guin herself has ever been pleased. And I can see why. There’s a certain kind of science fiction that benefits from low-budget sets. By acknowledging its artificiality, these films encourage a more active participation in their clever scenarios. You could always have a more interesting conversation about a “Star Trek” TV episode than a Star Trek film. The Lathe of Heaven relies on admiring long shots of ’70s architecture in Dallas to suggest a future cityscape and a few clumsy dissolves to suggest amorphous dreamscapes. The sea-turtle aliens are stilted and plastic, never rising above their status as Halloween costumes. It stars Bruce Davison, as the sympathetic dreamer; he gets a nude scene in which he displays his awkward everyman’s body. (Davison is the guy who played the bigoted senator in the X-Men movies). In short, it’s a perfect aesthetic for a film whose themes rely on the waywardness of reality and world-changing, whose central figures battle out two competing worldviews, one Taoist and the other utilitarian.

That discomfort I always feel with TV shows from this period was particularly present as I watched it. It nauseated me, made me feel a little sad for a small slice of history during which I was alive and completely and utterly powerless. Who knows! That might have been part of the reason why I felt as drawn as much to the production as I did. It’s been said that the great new works of art that appear while you are in your teens and twenties are the ones to which you’ll always feel most drawn. But I wonder if there’s another deeper sensory rejection we all feel with the works of art made around the time of our births.