SWANS CROSSING and the Makings of a Forgotten Teen Melodrama 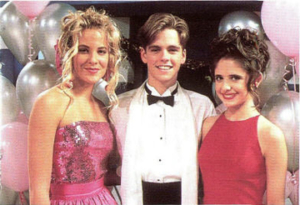 My first TV heartbreak was brought about by the cancellation of a show called Swans Crossing that aired the summer before I turned twelve. Contrary to other bittersweet series finales through which I silently cried (Charles in Charge, Growing Pains), the Swans finale came after only one brief season and ended with a dissatisfying TO BE CONTINUED…frame that proved to be a false promise. Armed with advice from a variety of glossy teen magazines, I solicited petition signatures from reluctant classmates and wrote the producers demanding that Swans Crossing be offered a second chance. I waited for a reply and was ready to champion the cause, but eventually got distracted by boys, grunge rock, and the general turbulence of adolescence.

Swans Crossing is a somewhat forgotten show that aired from June to September of 1992. According to the original press release, the show’s producers called it “the first nationally-syndicated daily live-action serial developed for pre-teens/teens.” In other words, a soap opera — and in more of a Days of Our Lives than a Dawson’s Creek way. Like other daytime soaps, Swans dragged its story lines like a fifty-pound sandbag across multiple episodes and excelled at trademark techniques such as holding the last shot of a scene on a character’s pensive face for six seconds too long, all in the spirit of melodrama.

To keep us guessing, the writers introduced some suspenseful subplots, namely the presence of two mysterious men — referred to as the “Baldies” — sent to the states from the fictional country Rodavia to spy on a couple of teenage chemistry nerds (alias: “Dr. Vann”) who were covertly producing “self-perpetuated rocket fuel.” The Baldies added a menacing angle to the show’s generic sagas; they made life in Swans Crossing seem perilous. For a few episodes, they even kidnapped one of the nerd’s girlfriends and interrogated her in a snake pit (whether the snake pit was a pre-existing town fixture is undetermined). But the efforts to transform the show into a thriller weren’t enough to boost ratings; Swans was cancelled after its initial sixty-five-episode run.

In a world where most cultural biproducts from the nineties are revered for being so bad they’re good, I’m shocked at Swans’ relatively absent cult following. There seem to be only three websites dedicated to the show, all from the kitschy Geocities era, complete with teal fonts and backgrounds tiled with the show’s logo. Where are the VHS trading posts? Where is the fan fiction? Why aren’t more people reminiscing the crap out of this awful show?

And it was awful, in that over-acted, unrealistic plotline kind of way. One might be inclined to compare it to the more successful Canadian teen soap Fifteen, which aired for five seasons (and was eventually picked up by Nickelodeon), but Swans was in a category of its own. While Fifteen was like a junior high, Canadian version of 90210, Swans aspired to full-on soap opera status. It aired Monday through Friday, in a kid-friendly 5 p.m. timeslot. My friend Jen and I watched it religiously, on the same kitchen TV set that her chain-smoking mother used to watch The Young and the Restless earlier in the afternoon. And I loved every fantastically melodramatic minute, from commie spies to vindictive hair dying to rocket launches gone awry. The only reality I could remotely compare it to was lazy summer afternoons when we’d steal our mothers’ make-up and pretend we were slightly older, sexually-active versions of ourselves.

The same absurd, soap-y storylines that temporarily attracted us proved to be Swans’ demise. “We’ve written the show in a different voice and with a very different twist than other pre-teen/teen programs,” said executive producer Mardee Kravit. “Instead of focusing on the trials and tribulations of adolescence, we’ve focused on the best aspects of this time of life that each and everyone of us clearly remembers.” But I do clearly remember the trials and tribulations, none of which involved throwing dinner parties or hanging out in my dad’s submarine.

This may explain why Swans ultimately failed: it was completely unrelatable. Watching callow, over-privileged teenagers pretend to be callow, over-privileged adults only satisfied our needs for a hot summer minute. We craved reality. We craved adolescence. We would soon pledge our loyalties to shows like My So-Called Life that offered a more authentic portrayal of our experiences. Swans was more like a misguided teenage fantasy, an elaborate dream from which Sydney Rutledge might wake up and realize her small town life was actually absent of international espionage, just like the rest of ours.