Reading Under The Influence 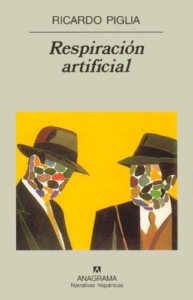 I am drinking a gin and tonic while I write this blog post because that’s what Renzi and Tardewski drink in Ricardo Piglia’s strange and brilliant novel Respiración artificial. Renzi has traveled by train from Buenos Aires to meet his long-lost uncle, an unsavory character about whom he has written a mediocre book. Instead he is greeted at the train station by his uncle’s chess companion, a Polish immigrant who dreams of writing a novel made up entirely of citations (you should really read this book.) Barely concerned by the inexplicable absence of Renzi’s uncle, Volodia Tardewski invites him to a club where they drink gin and put forth a comprehensive theory of literature featuring failed authors and unreadable novels:

“In vino veritas,” says my father: “In wine, truth.” The classical scholars wrote of poetic inspiration as a kind of intoxication; they also wrote of intoxication as a kind of inspiration. This is the romance of the drunken intellectual. Nine-to-five academics and professional writers can merely push the boundaries of human knowledge. With alcohol, Renzi and Tardewski transcend them. Piglia brings us closer to truth.

Isn’t that a delightful thought? I’ve been thinking a lot about the many ways that literary study can extend beyond the academy. Drunken scholarship leads us from the staid and dusty halls of the ivory tower out into the streets, where we are free to drink copious cocktails and make grand declarative statements that leap from literature to divine truth. It restores literature to the real world of passionate discourse, and it removes the traditional barriers that determine authority. Everyone is equal while under the influence.

But then the delights of drunken scholarship dissipate and we are left hungover and confused.

“I hate how people romanticize the life of scholarly excess,” says Billy, a colleague who I cornered this afternoon to talk about literature. (There were no drinks.) “It’s really about self-destruction.” Billy’s right, of course. Renzi wrote a bad novel and Tardewski dropped out of graduate school. The same is true, in its own way, of my other favorite drunken scholars — Ernesto San Epifanio and Arturo Belano from the also amazing, also strange novel Los detectives salvajes by Roberto Bolaño. San Epifanio produced what I still consider to be one of the most brilliant efforts to reconstruct literary history ever written, while high, at a party in Mexico City. Belano recited Rimbaud and told a long and sordid and apocryphal anecdote before intervening in a bar fight. In the end, they were both overcome by political violence and drug abuse, homophobia and disease.

I’m not really drinking a gin and tonic while writing this blog post.

Gin and tonics make me stupid, just like they turn Piglia and Bolaño’s characters into fools. It’s worth noting that neither author lives the dissipated existence embodied by his characters: Piglia is a professor at Princeton, and Bolaño, contrary to mythology, led a relatively respectable middle-class life. Drunken scholarship is really just a fiction, which is probably for the best. As Charles de Saint Evremond writes in his Miscellaneous Essays (1692), “When a Man, intoxicated with reading, makes his first step in the World, ’tis usually a false one.” Renzi and Tardewski, San Epifanio and Belano – their literary theory is brilliant, but it’s also insane.

Still, I’m not ready to give up on the romance with intoxication. I want to be open to insane literary ideas and I hope to have a few of them myself. I’m just looking, I think, for a different kind of influence. Not the dream of getting drunk and talking about literature, but the dream that we could all get together and get drunk on books.