Both Flesh and Not – David Foster Wallace 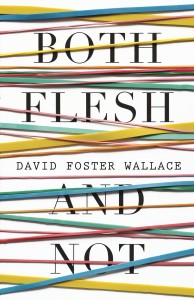 On April 14, 2009, a little over seven months after David Foster Wallace’s death, Little, Brown published This Is Water, a slightly abridged version of Wallace’s 2005 commencement speech at Kenyon College. To make the speech book-length, a single sentence was printed on every page. Now, in between the fifteen uncollected essays in Both Flesh and Not, the most recent entry in the posthumous DFW oeuvre, the publisher has included selections of Wallace’s personal vocabulary list to serve “as a reminder of Wallace’s ferocious love of language.” These editorial decisions illuminate the most cynical, disheartening aspect of an author’s posthumous career — suddenly anything the author wrote, even lists of words he wanted to use but never got around to using, are fair game so long as the publisher makes a buck.

Is a list of five underappreciated books written for Salon.com an essential contribution to the Wallace canon? Or a two page recommendation of Zbigniew Herbert’s Mr. Cogito? Since most of the reportage that distinguished Wallace’s nonfiction (the cruise ship piece, the state fair piece, the lobster festival piece, the McCain piece) is already collected, it doesn’t leave Little, Brown with a whole lot of options. What we get is a report from the 1995 U.S. Open, criticism on the special effects in Terminator 2, an introduction to The Best American Essays 2007, and lots and lots of book reviews, which cover subjects from Borges and prose poems to nearly 50 pages on David Markson’s Wittgenstein’s Mistress.

This isn’t to say that Both Flesh and Not is all B-sides. The collection begins with Wallace’s now-iconic 2006 essay on Roger Federer. Then, the book jumps to a piece from 1988. That leap backward is pretty jarring — from the unmistakable voice in the Federer essay we get a writer who apologizes for name dropping, who characterizes himself as “someone who tries to write” and “a would-be writer.” From there, the book moves chronologically, charting Wallace’s progress from uninterrupted texts to constantly interrupting footnotes. It’s a neat editorial decision, but for DFW diehards the content used to trace Wallace’s career arc is a bit disappointing. Here Wallace covers ground he treaded more successfully in his other books. “Fictional Futures and the Conspicuously Young” floats some theories about television that are more fleshed out in A Supposed Fun Thing I’ll Never Do Again, while “Rhetoric and the Math Melodrama” tackles questions of genre without the gusto and earnestness of the Tracy Austin review in Consider the Lobster.

But here’s the thing: you probably won’t think about anything of this when you’re actually reading Both Flesh and Not. All these criticisms — about the book’s missteps, about work that lives in the shadow of its author’s superior efforts, about the ethics of this whole posthumous-Wallace enterprise — drift away. For 323 pages, David’s back. He’s showing you a sentence that correctly uses “that” five times in a row (“He said that that that that that writer used should really have been a which”). He’s filling four pages with praise for obscure descriptions of hair. He’s correcting our grammar and using the word “boner” in the same breath. And that’s all in one essay.

In some ways, Both Flesh and Not winds up being one of the most striking examples of Wallace’s gift. Even when he has no control over the work being presented, even when that work isn’t his best, reading Wallace sentence by sentence makes all that moot. You want to grab the nearest person and read aloud.Since I have your attention, here’s Wallace at the U.S. Open:

Sampras, poor-postured and chestless, smiling shyly at the ground, his powder-blue shorts swimming down around his knees, looks a little like a kid wearing his father’s clothes.

And here’s Wallace on fiction writing:

Fiction becomes a weird way to countenance yourself and to tell the truth instead of being a way to escape yourself or present yourself in a way you figure you will be maximally likable. This process is complicated and confusing and scary, and also hard work, but it turns out to be the best fun there is.

I could keep going. I wish David could, too.