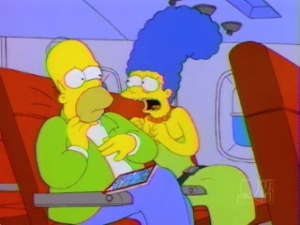 At some indeterminate point within the past several years, I developed a fear of flying. I’m not really sure what the onset of aerial anxiety feels like for others, but I think it’s safe to say mine was comparatively mild before attaining full blossom in August 2011.

It was then, during a flight from Phoenix to New York, that a perfect storm of travel fears agglomerated into one truly horrendous flying episode. The first red flag presented itself in the form of a gentleman wearing large studio headphones — Beats by Dre, as I recall — and shouting along to his music as he wandered up and down the center aisle. Despite my moderately seasoned familiarity with a smorgasbord of musical styles, his indiscriminate yelping resembled nothing I had ever heard before. (Reggae may have been the closest cousin, but I hesitate to so gravely dishonor my fellow flyer’s musicality.)

Tone-deafness is a forgivable offense, but genre ambiguity I cannot withstand. And so I regarded him with mounting horror as he ducked into and out of the plane’s lavatories — yes, lavatories: frequent flying often results in distorted vocabulary – for up to forty-five minutes at a time, images of would-be shoe bomber Richard Reid dancing in my head all the while.

Finally, upon catching the attention of a flight attendant to confirm that she had not somehow failed to notice the disruption, I was curtly informed that the passenger in question would be apprehended upon landing. This was, of course, an only mildly comforting assertion. Embodying the logical fallacy of petitio principii, the attendant’s statement presupposed the flight’s successful conclusion, while the suspicious headphone-toting man was allowed to continue his idiosyncratic self-communion and endless restroom meditations with impunity. One could either threaten my wellbeing or violate the laws of logic, but to impose both conditions simultaneously was simply too much for me to handle.

Whatever his ultimate designs, the hapless music lover would soon find himself a victim as well: inclement weather at our destination kept us circling at cruising altitude until we ran low on fuel. Eventually, we were forced to make an interim landing in Pittsburgh, a city that – among other inferiorities including, but not limited to, the Pirates – possesses a decidedly lesser musical pedigree than New York. There, he was presumably apprehended, convicted of disturbing the peace, and sentenced to live in Philadelphia.

From my seat on the plane as it idled on the Pittsburgh tarmac, I began to mentally calculate how long it would take to catch a train to New York. I was moving to Paris the next day for graduate school, and missing an international flight due to bad weather on another one the previous night seemed as bad an omen as any. (To be fair, the earlier process of obtaining a French student visa should have been warning enough.) After about an hour or so, the crew announced impending takeoff.

Then, after continuing to circle in the skies west of New York City as we waited out local thunderstorms, the captain’s voice crackled over the public address system. He delivered the welcome news that we would soon begin our descent, but tempered his statement with a warning that the ride would be extremely bumpy.

What followed next is best described as a series of images. Lights flickering on and off in the cabin. Flashes of lightning penetrating the otherwise opaque clouds that smothered the windows as we all peered out. Lurches: those old familiar freefalls in which the plane feels as if it has jumped ten feet and I know, just know, that the looming drop will catapult my stomach until it is level with my esophagus. The tiny streaks of rain chasing each other horizontally down the side of the aircraft. The high-pitched shrieks of fellow passengers, the hyperventilation of the man directly behind me, the snapping shut of his window shade by a wife less curious than resigned.

The nervous laughter of seatmates: that odd ritual of male bravado that encourages – nay, requires – casual conversation to proceed as usual, replete with forced gallows humor and nonchalant glances out the window that mask whitened knuckles massaging stoic armrests. And finally, mercifully, touchdown. Applause. Exhalation. The inevitable Lost references delivered in an appropriately wry tone. (I’ll admit it: that was me. Masculinity reaffirmed.) Then, disembarkation.

Since that time, my flying has appeared to me as a series of vignettes, each consisting of a negotiation with my deity of choice – our Lord and Savior Jesus Christ, as it happens, with whom I reopen lines of communication almost exclusively while crammed into various aircraft – as to what I will concede in return for a safe arrival. Subsequent to minor jostling, I may be inclined to proffer a weekend or two of volunteering at a local soup kitchen. An unexpected downward swoop due to gusty winds may even dislodge my inherent phobia of church enough to concede attendance on Easter Sunday. It is not until the cabin lights flicker that I timidly offer the olive branch of a switch to the Republican Party – a proposition whose sanity even the Almighty Himself seems to casually question these days. Indeed, these jousts and parries with God are best represented formulaically: the generosity of my offer is directly proportional to the severity of the turbulence, as measured in standard deviations from mean meters dropped per jolt.

Of course, I harbor other superstitions as well. It is probably most accurate to characterize my flying preparations as a mutual fund of sorts, constituted of various types of investments all designed to hedge against utter desolation (a fiery nosedive into a mountainside) and achieve modest returns (a safe landing). Recently, for example, I put off watching The Wire mid-flight in favor of lighter fare to calm my frayed nerves, and I swear Sebastian Edwards’ book on Latin American populists spawned vicious air pockets every time I opened its pages.

Small decisions, too, attain cosmic significance when followed seconds later by a slight shudder of the cabin. Was the weather better when I’d paused Bridesmaids, or is the only way to ensure smooth sailing to watch the entire film at 4x speed? These are not questions to be taken lightly, for upon their successful resolution rests the fate of hundreds of passengers, as well as the ability to understand a damn thing Kristen Wiig is saying at that rate. And no matter which airline I fly, I continue to cringe at the deliberately ominous abstraction of the announcement, “We’ll be on the ground shortly.”

Occasionally, my aviation education extends beyond the confines of the flights themselves to include pre-flight online research. Sites like FearOfFlying.com and PlaneCrashInfo.com have become light acquaintances of mine, at turns reassuring and terrifying me but always, without fail, infantilizing me. The juxtaposition of the two sites is especially numbing: one is devoted to celebrating the indestructability of airplanes and the enduring wonder of human flight, while the other prides itself on photographs of twisted fuselages newly embedded into some godforsaken Russian hinterland.

Ironically enough, my increasing anxiety has coincided with an uptick in my own flying patterns. Last year I flew over 40,000 miles, and this year I’m likely to reach comparable totals. Perhaps, then, this reflection on my irrational fears is itself an absolution, affording me that elusive immunity from harm that seems so impossibly distant at 37,000 feet. Perhaps it is via this very admission of my inability to conquer these primal terrors that I will finally, at long last, be somehow delivered from my ongoing nightmare.

But until I find out for sure, you’ll know where to find me on Easter.