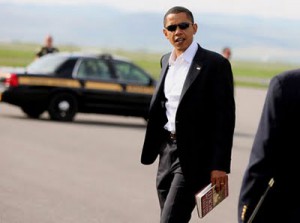 Of all the incongruities that dotted the landscape of George W. Bush’s eventful presidency, the one that shocked me the most the first time I heard about it had nothing to do with terrorism, torture, or tax cuts. It was Karl Rove’s claim that Bush had read 95 books in 2006. Even more astoundingly, according to Rove, the president then followed up his impressive feat by reading 51 the following year and at least 40 in 2008.

The titles ranged from the now-in-vogue Team of Rivals by Doris Kearns Goodwin to Albert Camus’ fiction masterpiece The Stranger. Also included was Vince Flynn’s novel Executive Power, which breathlessly recounts the exploits of Mitch Rapp, an ex-assassin for the CIA, and contains literary gems such as the following: “When they got back to Washington it wouldn’t be like this. There would be fires to put out and plans to be put into action. He watched Anna slip out of her bikini bottom, and the problems awaiting him in Washington vanished. They could wait, at least for another day. Right now he had more important things on his mind.” This is actually too depressing to bother making the obvious jokes.

Of course, given Rove’s elastic relationship to the truth, as well as his impetus for penning the column — to disprove the “myth perpetuated by Bush critics that he would rather burn a book than read one” — it is difficult to assess the veracity of his claim that Bush read 186 books in a three-year span. (As someone who once chronicled my own quest to read 50 books in a calendar year while holding a full-time job, I have my doubts.) Moreover, the general consensus on the efficacy of the Bush years suggests that his time may have been better served reading national intelligence reports rather than enjoying French novels.

Nevertheless, however embellished the totals, Rove’s revelation of Bush’s reading habits has stayed with me. I am reminded of it this December (as in all other Decembers), as publications release their “Best Books of the Year” lists — and I am especially reminded of it during President Obama’s annual summer vacations to Martha’s Vineyard, when the press corps descends upon the tony Massachusetts island like a pack of vultures to gawk at the president as he enters the local bookstore and report on his reading list after he departs.

Obama, like his predecessor, is known to have read Goodwin’s tome on America’s 16th president, and he has also digested biographies of John Adams and FDR in between works of fiction such as Marilynne Robinson’s Gilead and Israeli author David Grossman’s To the End of the Land. This year, due to the pressure of the campaign trail, his summer vacation was canceled, spoiling the rabid curiosity of the literate public and press, whose fascination with presidential reading is nearly as vacuous as the process of thorough vetting such enthusiasm assuredly necessitates.

Bizarrely, one of the president’s riskiest book choices occurred before he was even elected. In May 2008, Obama appeared in Bozeman, Montana, holding a copy of Fareed Zakaria’s The Post-American World. As an extraordinarily cautious candidate then combating accusations of otherness often fueled by thinly disguised bigotry, Obama’s implicit endorsement of the book was surprisingly nonchalant in its self-confidence. Two years later, in the throes of the Tea Party rebellion, Obama stuck to the more conventional novel Freedom, by cantankerous author Jonathan Franzen.

In this golden age of American polarization, it is no surprise that even one’s reading is subject to the scourge of partisan bickering. During this year’s presidential campaign, Amazon.com actually produced an interactive map detailing which states’ customers were buying conservative versus liberal titles and coloring those states red and blue, respectively.

Even politicians are now just as often producers as consumers of the written word: today, penning a flag-waving bildungsroman-esque memoir is nearly a prerequisite for launching a presidential campaign. Obama authored Dreams from My Father and The Audacity of Hope; Mitt Romney wrote No Apologies. If Herman Cain fends off his circling sexual harassment accusers in the dually relevant courts of law and public opinion, perhaps he will release a recipe book of pizza toppings.

In this charged atmosphere of literary/political self-branding, one may be forgiven for wondering what literary selections will enjoy the presidential seal of approval during President Obama’s next summer jaunt to Martha’s Vineyard. Now that he has won reelection, edgy book choices no longer run the risk of infuriating key swing-state voters. So while it seems safe to say Howard Zinn’s A People’s History of the United States will not be among Obama’s shortlist in the near future, perhaps a more recently controversial book will finally make the cut.

But regardless of Obama’s preferences, it is unclear just how the public benefits by yapping at the heels of our presidents’ literary exploits. An aspiringly well-informed citizenry would do better to read books about our leaders than to zealously mimic their book purchases or, worse yet, buy these same politicians’ self-serving propaganda. Regardless of one’s coordinates on the political spectrum, it’s always a good idea to remain detached enough from ideological passion to be able to distinguish quality literature from soon-broken promises wrapped in patriotic vernacular and stuffed into a hardback cover. As George W. Bush’s ex-assassin hero knows all too well, those books can wait, at least for another day.

Jay Pinho is a post-graduate student at Columbia University’s School of International and Public Affairs. He blogs at The First Casualty (www.jaypinho.com) and can be found on Twitter as @jaypinho.