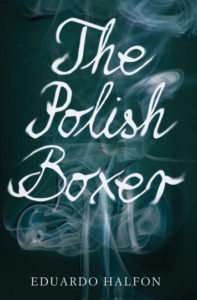 The Guatemalan author Eduardo Halfon’s book The Polish Boxer is his first translation into English; presumably to honor this momentous occasion, Words Without Borders, which coordinated the translation, gave the book not one but five translators.

The book is hard to classify. Reviewers are calling the book a novel, pointing you toward reading with a structure in mind.  But The Polish Boxer is told in discrete stories that sit elegantly next to each other, connected, not exactly bound in a novel’s continuous arc.

The first story in The Polish Boxer immediately seduced me; on the first page, I felt the spark of recognition that comes from reading something with actual depth and import. The story opens on the narrator, conspicuously called Eduardo Halfon, teaching a literature course to a group of lethargic, entitled students. Halfon the narrator, jaded and understimulated, prowls with restrained aggression among his domesticated students. He is roused from his acerbic internal monologue only by a rare, talented scholarship student named Juan Kalel, an indigenous boy from the country who writes poetry and outperforms his classmates beyond measure, and by the come-hither looks of a beautiful female student with “molasses eyes.”

The story, called “Distant,” begins: “I paced among them.” The title and first sentence immediately open up a tension that simmers throughout the book — described is the distance between what is apparent and what is hidden. Halfon describes an essay the class reads:

We read that a story always tells two stories. We read that the visible narrative always hides a secret tale. The story’s construction makes something hidden appear artificially, we read, and then I asked them if they’d understood it, any of it, but it was as though I were speaking some Bantu language. Silence. But rashly, undaunted, I stepped further into the labyrinth.

The metafictional themes of “Distant” set up, in a way, the questions the rest of the book pursues. It’s a kind of noir story, introducing a chase larger than the one resolved in the story itself. After sharing his poetry with Halfon, Juan Kalel drops out of school under mysterious circumstances. Halfon embarks on a trip out to the country to find out what happened to Juan, whose information has been officially deleted from the university’s records, erasing his very existence along with his studenthood. The journey brings Halfon out of the city to rural, indigenous Guatemala. He writes, “It was cold, but mountain cold, which is different from a leaden, city cold. More chaste. More radiant.” Halfon’s self-consciously hard-boiled narration flowers into a deeply literary appreciation for the sounds and stories of place-names as he moves into the less known, more poetic space of the missing student. “All of these names are like charms; they cast some sort of linguistic spell, I thought as I drove, and I recited them like little prayers. Perhaps my favorite are the tenangos: Chichicastenango, Quetzaltenango, Momostenango, and Huehuetenango. I love them as words, as pure language.”

Soon, we are led into stories that seem more continuous. Halfon tells a story of feeling out of place at an academic conference on Mark Twain — he envisions himself being thought of, in one instance of his trenchant but anxious ability to imagine himself from a borrowed perspective, as “some Latino revolutionary,” striking the delicate blend of feelings of insecurity and superiority. He can visualize this persona even as he struggles to present a coherent interpretive persona at the conference. Later, he says, “Sometimes, just briefly, I forget who I am.” Statements like this one hang at the end of paragraphs, weighing heavily into the spaces between.

The title story, “The Polish Boxer,” is a story about Halfon’s grandfather, an Auschwitz survivor who used to tell his young grandson that the number on his arm was his phone number, tattooed so he wouldn’t forget it. Halfon’s grandfather was saved from certain death in Block 11 by a Polish boxer he meets, who tells him exactly what to say to his would-be executioners to have his life spared. “I used his words,” says the grandfather. References to this story appear throughout The Polish Boxer — for Halfon, it seems, there is some uncertainty as to how to think about this story, how to let it sit as a part of him, so pieces of it come up at different moments to be examined in the light of different circumstances.

Our narrator’s search for Juan Kalel in the first story serves as a bit of foreshadowing. Later, Halfon meets a half-Gypsy pianist named Milan Rakić, a classical pianist tormented by his own love of the Gypsy music in his blood, who sends cryptic postcards to Halfon from his worldwide travels. When the postcards stop, Halfon ends up on the chase again, this time to Belgrade to look for his friend among the city’s trampled Gypsy population.

If the search for Juan Kalel is a projection of Halfon’s search for his own literary self, then this later search for Milan Rakić is perhaps more to do with Halfon’s semi-acknowledged struggle with his Judaism. Questions of identity are obliquely engaged, elegantly filtered through stories of failed encounters, in which mental connections are missed even when the bodies are present; meditations on translation, borders, seduction and intoxication; scenes in which politics, sex and guilt get soldered together. In one scene, after an unsuccessful meeting with Gypsies in Belgrade in the effort to find his friend, Halfon drunkenly categorizes the porn showing on multiple channels in his rented apartment. He writes, “And I stayed like that for a long time, spiritually reconciling myself to life.”

Toward the end of The Polish Boxer, there is another conference, another chance for Halfon to express himself in the undefined spaces between official and unofficial speech. The subject of the conference is “Literature Tears Through Reality.” In thinking out his speech, Halfon remembers a scene from an Ingmar Bergman film, and unearths from his confusion a conclusion: “As we write, we know that there is something very important to be said about reality, that we have this something within reach, just there, so close, on the tip of our tongue, and that we mustn’t forget it. But always, without fail, we do.”

In The Polish Boxer, Halfon pulls his narrator and his reader through an endless pursuit of something never quite known, but constantly, enticingly suggested.