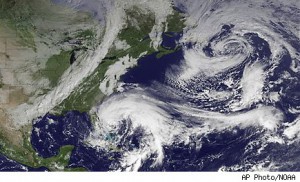 As a friend of mine astutely quipped on Facebook the other night, “Shouldn’t we be talking about Frankenstorm’s monster?” The answer is, of course, yes: in Mary Shelley’s 1818 novel Frankenstein; or, The Modern Prometheus, the title character is not the stitched-skin rogue science experiment but the scientist who created him: Dr. Frankenstein.

Today, tomorrow, and possibly for another week, the talk needs to be primarily about Frankenstorm’s monster — Hurricane Sandy — and the near-apocalyptic damage she has wreaked upon the mid-Atlantic, New England, and especially New York. The talk needs to be first about surviving, then about saving, and finally about recovering and rebuilding.

But my friend is also wrong. Soon — very soon — we’ll need to start talking about Frankenstorm itself. Who, if anyone, is the creator of this giant force?

If we humans have only begun naming hurricanes in the relatively recent past, we have been naming their makers for millennia. Naming God as the maker of the flood described in the Old Testament is a good early example of this phenomenon. Several centuries later, Vergil employed this tactic in a couple of his works, including The Georgics, a masterful agricultural poem that covers such scintillating topics as soil quality and sheep husbandry. In the first book, he interrupts a polemic on the importance of hard work in human endeavors with a summer storm so furious that “dykes fill, low river-beds/ Swell to a roaring torrent, and the sea/ Foams with the seething of its estuaries.” In other words, it does to Italy what Sandy has done to New York City.

Jupiter is the author of Vergil’s merciless tempest: “The Father himself in the midmost night of cloud/ Wields thunderbolts again.”

The imperious god’s storm destroys the farmers’ near-ripe harvests, effectively nullifying the hard work they have been investing in their land for months (indeed, the work that Vergil has been explaining how best to do).

At least one moral of the story is simple: nature, driven by divine force, conquers all. We humans may futz around on earth to our hearts’ (and stomachs’) content, but a drought or a storm or an earthquake or a tsunami might sweep in at any moment and tear the fruits of our labor — and even our lives — from us. Vergil takes a stab at this problem by recommending diligent attention and sacrifice to the gods.

A couple millennia years later, writers are still using storms and natural disasters to symbolize the impotence of puny humans in the face of nature’s wrath. In Charlotte Bronte’s Villette, a sea storm ruins what should have been a wonderfully happy ending. In William Faulkner’s As I Lay Dying, a rain-swollen river nearly prevents the Bundrens from completing their grotesque mission. And in Zora Neale Hurston’s Their Eyes were Watching God, a hurricane steals the life that its protagonist waited so long to find. As the storm bears down, the narrator reports the characters “eyes straining against crude walls and their souls asking if He meant to measure their puny might against His.” “He,” here, is God, the hurricane’s master and creator.

By 1937, we were also naming storms and calling them monsters: in Hurston’s novel, God’s thundering “woke up old [Lake] Okechobee and the monster began to roll his bed;” soon, as the flooding begins, “The monstropolous beast had left his bed.” Hurston’s world names the both the hurricane’s creator and the hurricane itself. Today, we are more likely to name only the hurricane. Andrew, Katrina, Irene, Sandy.

Whoever nicknamed Sandy “Frankenstorm” inadvertently reopened the space for us to name both the storm and its maker. But in 2012, the maker-storm-human relationship isn’t as simple as it was in biblical times or Roman times or even in 1937 America. Lately I’ve been hearing a fancy term floating around: The Anthropocene Era. It’s too new to have made it into the Oxford English Dictionary, and as with all loaded young words it requires delicate handling until strong enough to fend for itself. The Anthropocene signifies, more or less, a new geological era on Earth — an era some scientists say we have entered — in which human activity impacts global ecosystems more than any other single factor.

Such that when, say, a gargantuan and unprecedented hurricane barrels up the historically temperate East Coast, we humans might consider asking ourselves: are we in any way responsible for this mess? Might the CO2 we’re pumping into the atmosphere play a role in the birth of this freak storm?

Now, I’m not claiming that climate changed “caused” Hurricane Sandy; as sources from NPR to Salon are already pointing out, storm system analysis is far too complicated to be reduced to a single causal factor. But when you combine the uniqueness of this hurricane — its eerie lateness in the season, its incredible size, its tremendous persistence — with the climate change predictions about stronger storms and rising sea levels that the scientific community has been making for a generation, it is impossible not to notice a strong parallel.

We humans (in this case, we Americans) must therefore take a long look at ourselves this Halloween and consider what it means that we have, in a sense, morphed from puny victims into mighty creators. We have collectively become like a god, unleashing watery fury upon — ourselves. And on all the animals and all the trees and on every one of Earth’s organisms. The subway of New York City, this country’s stronghold of busyness and newness and productivity and speed, is underwater. The city’s residents are, for the second time in two years, paralyzed by a truly historic storm. Our actions have put so much energy into the atmosphere that we are unable to expend energy here on the ground. We, Frankenstorm, have created a monster we can no longer control.