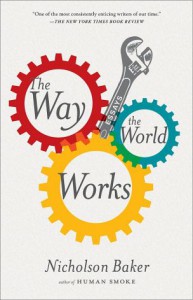 I pegged Nicholson Baker as a Luddite midway through his new essay collection, The Way the World Works. In a speech titled “If Libraries Don’t Do It, Who Will?” he chides research libraries for digitizing their collections rather than keeping “the obscure things, the cumbersome things that even though they’re used only once in ten years or thirty years or fifty years are valuable because they are what people published and read.” But later he confesses, “I’m fond of Google.” And admits, “Wikipedia is just an incredible thing.” And praises the iPad as a “brilliant, slip-sliding rectangle of private joy.” What happened to the crank who wanted library shelves overflowing with “cumbersome things?”

Time, maybe. He wrote the speech the same year he published an entire book on the subject (Double Fold: Libraries and the Assault on Paper). The first of those technology pieces, “The Charms of Wikipedia,” arrived eight years later. Yet the Wikipedia piece also reveals the underlying cause that links Baker, Champion of Paper with Baker, Champion of Internet: preservation. In it, he chronicles his efforts to protect Wikipedia articles on smaller, more obscure topics from deletion. “I have a secret hope,” he writes. “A librarian, K.G. Schneider, recently proposed a Wikimorgue – a bin of broken dreams where all rejects could still be read….[It] would have much to tell us over time.”

Indeed, The Way the World Works has lots to tell us about smaller, more obscure topics. Baker’s giddiness over even the minutest detail is infectious. After a few months trying out video games, he lauds Red Dead Redemption for “the prettiest clouds and hootiest owls.” Upon purchasing a Kindle, he appreciates its plug as “extremely well designed, in the best post-Apple style. It was a very, very good plug.”

If honing in on tiny, telling details is Baker’s great strength as an essayist, knowing how gently to make his point is a close second. In “Sunday at the Dump,” he spends four pages describing the setting and its inhabitants before musing, “Maybe it’s the clearness of the bags that makes the dump seem like a place of confidences — everyone can see just what everyone doesn’t want.” He doesn’t belabor this thought — he suggests it, lets us consider it, and moves on.

Sometimes he doesn’t even do that. The essay “One Summer” consists of sentence- and paragraph-long reflections that all begin, “One summer. “ For instance: “One summer I got a crush on a girl who was eleven. I was eleven at the time as well.” In stretches, the piece is hilarious, in others, tedious. Given Baker’s wide-ranging interests, The Way the World Works has its share of such lags. “No Step,” a meditation on airplane wings, and “String,” a meditation on boyhood and kite flying, never really take off. A glowing essay on New Yorker editor David Remnick does little else than glow.

But still: An essay on airplane wings? Kites? Even when they lack urgency, Baker’s familiar essays earned my admiration with their willingness to make observations rather than arguments. When arguments finally arrive (in the library and technology pieces and a lengthy case for pacifism in World War II) they feel trustworthy — here’s a man who doesn’t repeat himself, so this must be important. And then, after all his impassioned remarks, the book ends with an essay on mowing the lawn.

Baker considers everything worth looking at, and The Way the World Works reminds us that these thoughts, from investigative to whimsical, are worth preserving. Of his many astute analogies, my favorite is Baker’s observation that book pages

live out their long lives in the dark, keeping hidden what inky burdens they bear, pressed tightly against their neighbors, communicating nothing, until suddenly, like the lightbulb in the refrigerator that seems to be always on but almost never is, one of them is called upon to speak – and it does.

Newsprint, books, iPads — who cares what keeps these pages of Nicholson Baker around, so long as they keep talking.