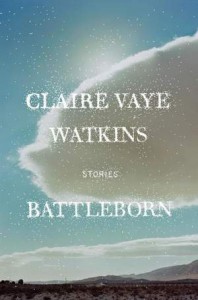 Claire Vaye Watkins is 28 years old, she grew up in the Nevada desert, and she is the daughter of Charles Manson’s former right-hand man, Paul Watkins. Before I started reading Battleborn, Watkins’s first book of short stories, these were the few things I knew about her, and I figured they would in some way color my reading. But with the exception of one story (“Ghosts, Cowboys”), a fictionalized account of Watkins learning about her father, who died when she was six, the tales obliterated my preconceptions.

Watkins has been likened to Annie Proulx, Denis Johnson, and Joan Didion — all appropriate comparisons — but Watkins’s expansive, wrenching prose signals a unique talent. The stories, all of which take place in Nevada, “the Battle Born State,” drift around in time and history, homing in on characters who are subtly — or not so subtly — processing violence, death, or detachment.

“Rodine al Nindo,” which shares its title with a classic Italian love song, centers on a nameless woman telling her new lover the worst thing she’s ever done. As a teen, she escaped her small town with a friend to drive to Vegas, where they both attached themselves to guys with flasks. Later, in the inevitable hotel room, “our girl,” as she’s jauntily called, makes a decision that will cause the friendship to evaporate and will puzzle and haunt her for the rest of her life. While her story signals catharsis and a new intimacy, the narrator still ends with her focus on the high school coda of the friendship, when her friend was physically close but impossible to reach or comfort.

In “Man-O-War,” another tale of a startling revelation, an older man named Milo comes upon an unconscious and nearly dead girl in the desert. Dealing with both paternal and sexual feelings, Milo helps her recover. But as the two grow close, the girl begins to reveal disturbing details about her family, a situation from which the man tries and fails to protect her. After the girl is easily taken from him, Milo’s frustration and helplessness cause him to turn on the only other living being connected to him: his dog.

He felt a steady holy pressure building in him, like a vein of water running down his middle was freezing and would split his body in two. He lunged at the dog. He wanted ore to skull. He wanted his shoulder burning, his hand numb. He wanted the holes that had been her ear and eye growing wider, becoming one, bone crumbling in on itself like the walls of a canyon carved by a river.

The dog escapes, but the dangers of isolation, of not being able to stop the hurt or even to pass it along, remain.

Readers may find themselves in the position of listener, taking on the burden of the mostly melancholic tales. I skipped a part of “The Diggings” that details a public fight between a bear and a bull because I knew that the scene would undoubtedly be explicit, troubling, and forever etched in my memory. But for the majority of the book, the ominous undertone is offset by prose so original and satisfying that it’s impossible not to delight in the perfect descriptions. Take this passage from “The Archivist,” in which a woman remembers a fight from a past relationship:

[She wanted] badly to bite him in all sorts of places, all sorts of contexts. On the apple of his cheek. Through a cutlet of skin gathered from the back of his hand. There was nothing to say. In the silence it occurred to her that they were within walking distance of her apartment, and that they had been all day. She saw the route home the way a bird would.

While most of the stories are immediately immersive, a few seem to merely echo the collection’s themes in thinner form. The story “Wish You were Here” follows a husband and wife with a new baby as they meet with another couple from their past. The new parents are unhappy, of course, but the story is more of a brooding snapshot than a standalone piece. Perhaps this is apparent because the rest of the works are so powerful and concrete. The emotional resonance of the tales — the sense of struggling to pull oneself up by another person — is mixed with images of crumpled photographs, flakes of gold dust, and blinking slot machines that linger long after the stories end.