What Are Poets For? – Gerald L. Bruns 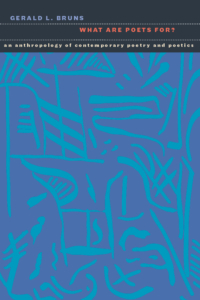 What Are Poets For?, a new collection of essays on poetry and poetics by critic/philosopher Gerald L. Bruns, is rather cryptically subtitled “an anthropology of contemporary poetry and poetics.” An anthropology? In a short preface, Bruns justifies this apparent moment of disciplinary misidentification: “For if there is no one thing that can be called poetry — if it is made of anomalies . . . then one’s study must proceed, like an anthropologist’s progress through an alien culture, at ground level, from one local practice or artifact to another, without subsuming things into a system.” Despite Bruns’ wealth of knowledge in philosophy and aesthetics — his engagements with Levinas and Adorno are particularly rich — the book largely adheres to this opening promise to keep its nose close to the ground, sniffing out localized allusions, formal patterns, and rhetorical maneuvers in the poems that it reads rather than constructing any sort of durable intellectual edifice.

To apply a systematic generalization to a book that is squeamish about such generalizations: Bruns’ methodology is what Michel de Certeau would term “tactical” rather than “strategic,” producing a critical narrative that is not the execution of X agenda using Y archive, but rather an accumulation of contingent responses to the localized contours of an archive, a critico-theoretical ricochet from one exciting poem or idea to the next. Bruns’ tactical criticism hangs together, if it hangs together at all, not through logical sequence or development of argument but through pure propulsive energy. This approach to criticism makes special sense in relation to the poetries that Bruns attends to, which by and large have abandoned any commitment to stable topicality, mimetic contents, or “argument.”

An introductory essay provides a deft catalogue to some of the most important “experimental” poetic practices on the scene today. It is followed by essays on poetry and ethics, “anomalies of metrical duration,” and Adorno’s aesthetics (an intrepid account of Aesthetic Theory, a book whose difficulty makes it a recurrent figure in the nightmares of graduate students everywhere), which round out the collection theoretically. The bulk of the volume, however is devoted to monographic pieces in which Bruns dauntlessly tackles a series of singular, often enigmatic contemporary poets: Susan Howe, Lyn Hejinian, Karen Mac Cormack, John Matthias, J.H. Prynne, and Steve McCaffery. Bruns’ critical methodology is, again, tactical rather than strategic, and despite its acute sense of connections between poetry and philosophy, perhaps the most notable aspect of the book is its eccentric mode of engagement with the poems that are its subject. Bruns often reads poems in an improvisatory manner, following etymologies, references, and definitions of obscure terms wherever they take him rather than trying to construct an argument. This sort of digressional exercise is most convincing in his engagement with Mac Cormack, whose ludic, chatty prose poem “Sleep is Incurable in our Lifetime” Bruns answers in kind:

“’Do men blink more than women?’ It depends on who we think is more reflexive in ‘nerve, muscle and example.’ Talent trumps pedigree, except in the hierarchies of academic life. ‘First sip’ is of ‘Calvados [a splendid cognac] from a snifter late.’ ‘Orgasms aren’t oblique’ because ‘Sex is precision.’ . . . . ‘Not implant but tenacious hamstrings’ may be for all I know a source of sexual precision. A tenacious hamstring sounds erotic to me. Implants are for the young. Players only love you when they’re playing: a traditional hermeneutical way to respond to pagan poetry is to appropriate a phrase rather than to try to decipher its intention . . . .”

How this peculiar form of close reading counts as a “traditional” response to poetry, pagan or otherwise, I can’t say, but Bruns’ willingness to allow the gleeful chaos of the poetry he writes about to creep into his own prose is commendable. Every good English major knows that a close reading is supposed to isolate an image, trope, or turn of phrase and carefully scrutinize it rather than wander across the page grasping at every association that presents itself, but Bruns stretches our sense of what it means to “read” a poem in order to demonstrate how the august tradition of the critical “reading” can be extended to works that seem to laugh in its face. That said, there are moments when Bruns’ off-kilter method of glossing poems stretches credibility. Most notable is an intriguing attempt to read J. H. Prynne’s recondite Not-You through the philosopher David Lewis’s ideas about the “garbage” in language, which in an effort to come to terms with the poem ends up, among other things, defining “milk solids” and providing a url for the Avian Protection Society. In the same way that Prynne’s difficult poem “adds garbage to language” — that is, according to Lewis, forces language to expand to encompass new forms of “truthfulness” — Bruns adds garbage to academic prose. My feelings here are genuinely mixed: it is always thrilling, on the one hand, to witness an academic writer, or for that matter any writer, using his or her prose to practice what he or she teaches; on the other hand, it is arguably possible to add too much garbage to language.

The highlight of the collection is a rather aphoristic essay on poetry and ethics centered around the work of Paul Celan and Emmanuel Levinas. For Bruns, Levinas’ ethics, which demand a sense of radical responsibility toward the other, find their literary expression in Celan’s desire to fill language up with strangeness. Just as Levinasian ethics demands that we disregard our own sense of autonomy or fulfilled obligations and allow our sense of self to be determined by the other beings we come into proximity with, Celan’s poetry forgoes having a unified, consistent speaking voice in order to fling itself into the void of otherness. Poetry, Bruns seems to be suggesting, is ethical in relation to the people and things it narrates because the form of selfhood it expresses comes into being as an attempt to reach out to the other; poetry is being-for-the-other, and therefore capable of having an ethics even when it seems to be at its most abstruse. The essay is delicately constructed and a delight to read, seeming to approach a central idea again and again through readings of different authors and texts (Celan and Levinas but also Charles Bernstein, Martin Heidegger, Osip Mandelstam, Maurice Blanchot, Jacques Derrida, and Samuel Beckett) without ever quite making contact.

The essay on Adorno, which reads Aesthetic Theory in order to revisit Adorno’s conception of “form,” is also fascinating. Bruns’ intriguing suggestion is that “form,” for Adorno, is not so much a patterning or structuration of the content of an artwork as a “dialectical” concept that defines itself in the negative, a leap outside of accustomed modes of perceiving artworks. Formalism and the avant-garde, in Bruns’ treatment, converge on one another: Adorno’s desire to “make things of which we do not know what they are” is the same as his desire to have an aesthetics of “pure form”; form does not submit aesthetic experience to a rigid perceptual grid but rather liberates it from the need to be perceptible at all.

All things considered, Bruns’ book is, for the uninitiated, a useful introduction to a wide range of poets at the frontiers and margins of the contemporary scene, and for cognoscenti, a highly readable and theoretically savvy set of engagements with both canonical (if contemporary poetry can be said to have a canon) and marginal works. Bruns does not, ultimately, provide an answer to the titular question of what poets are for, but he does provide an extended, “anthropological,” nose-to-the-ground answer to the question of what poets do: a great many things, in a great many ways. What Are Poets For? is accordingly useful in yet another capacity: it models one plausible mode of critical response to the bewildering diversity of contemporary poetry. The topography of poetry, it sometimes seems, has opened out into a delta region in which anything is possible and radically different understandings of what it means to write and read poetry can coexist in deceptively serene proximity. So what’s a critic to do? Bruns’ answer — a good answer if probably not the only one — is to sift, sort, gloss, theorize, appropriate, make extravagant connections, or even honestly express mystification, but whatever you do, never underestimate the contingency and locality of your conclusions. A good anthropologist, Bruns never makes the mistake of thinking that what holds true for one poet will hold true for the next.