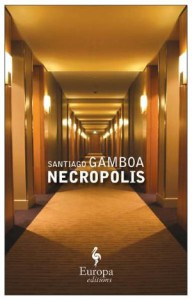 Santiago Gamboa is a storyteller. This sounds like so general a statement that it doesn’t communicate anything, but not all novelists are interested in telling stories. There are novels about ideas, or language, or about the idea of language. There are novels that subvert the spirit of simple narration by reveling in our failures to understand one another. These novels all tend to fall under the banner of modern or postmodern, which in a way makes Gamboa a serious throwback. Instead of taking the weakness of our connections as his subject, in his most recent work, Necropolis, Gamboa emphasizes how almost miraculously successful we can be at talking to each other.

At the heart of the novel is an unnamed Colombian writer living in Rome and still recovering psychologically from an illness that left him holed up for two years in some kind of mountain retreat, like Hans Castorp in The Magic Mountain. The action begins in earnest when he receives a strange invitation from an organization called  ICBM (International Conference on Biography and Memory) to attend their literary conference in Jerusalem. The impending violence of combat in that city serves less as a backdrop for the characters and more as a co-star. The other guests on the program include antiquarian book collectors, porn stars, poets, academics, and former religious disciples.

The setup alone is interesting, with the conference members telling stories à la This American Life. Entire chapters are devoted to long, meaty stories, presumably both true and fictional. But behind the scenes at the conference the suspect circumstances surrounding the suicide of Jose Maturana, the former disciple of an evangelical religious leader in Miami, turns the main narrative into a mystery story. While people continue to participate in round tables and tell the most moving biographical stories they know, there’s a secret subterranean history of violence that’s being explored. The suicide, murder, and political violence in the city seem on the surface unrelated to this mystery, but they are both part of the miasma of death and loss that pervade the entire text of Necropolis.

Gamboa has been compared to Gabriel García Márquez, but I think that’s wrong. I think this comparison is only made because both writers are from Colombia. They have nothing in common, be it theme or style. Instead, I was reminded of Thomas Mann. In its own way, Necropolis has more in common with The Magic Mountain and the Decameron — both stories of people hiding out from death and telling each other stories — than it does with anything Márquez has written.

There are a lot of stories to tell, and so Necropolis is a big book, not just physically, but also in what it contains: all the contrast of darkness and light; all the sex; all the death. All the violence and pride. All the tenderness and love. The day-to-day banality of existence beside the coursing adrenaline. While much contemporary experimental fiction concentrates on the failures of human communication — the liminal spaces — Gamboa seems more interested in how we finally succeed in sharing with each other.

The two big themes of death and storytelling compliment each other in this novel. The loud and incoherent violence of war, so far removed from the eloquent human voices collected at the conference, becomes an ultimate anti-story of silence and death. Yet in tragically brave opposition are the words we tell each other. Gamboa seems determined to break down the chicken-and-egg relationship altogether, making the words “stories” and “life” synonyms. With Necropolis I believe he succeeds.