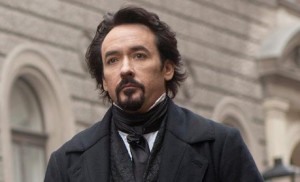 Today marks a momentous occasion: the release of thriller “The Raven”. When I heard that John Cusack would be playing Edgar Allen Poe tracking down a serial killer, my first thought was: man, the Party Down writers were prescient (especially since the related concept of Abe Lincoln fighting vampires panned out in movie form too). My second thought was: How on earth did this come to be?

To give a little more background, the plot of “The Raven” revolves around a murderer who uses Poe’s stories for inspiration. Poe decides to help out the police by hunting down the killer himself, since who knows his work better than him? It’s not a terrible idea, but it certainly says something about our society that a historical figure with an already impressively crazy life (marrying a 13-year-old cousin who died at 15, alcoholism, dying penniless at 40, etc.) isn’t considered compelling enough. This unintentionally entertaining CNN interview with John Cusack attempts to provide an artsy explanation for the crime-fighting slant. (It also calls the movie “meta,” compares Poe to Kurt Cobain and asks JC such questions as, “Do you feel comfortable acting while riding on horses?”) Cusack goes all out defending the film, claiming that it includes “the dance with the abyss, the madness, the mental illness. You have all those things and try to do a story that is fiction that tries to get you inside the head of Poe. It allows for more scope than I think a biopic would.”

Though there surprisingly haven’t been any movies to date about Poe, there are plenty of movies about writers (including a fair amount of documentaries). The vast majority of them don’t turn the writer into a crime-solving hero for “more scope.” I suspect the real answer lies more in the obvious realm of audience type and their attention spans. After the Titanic Twitter debacle (in which young folk didn’t realize the sinking of the Titanic had ACTUALLY HAPPENED), my faith in this box-office demographic is flagging.

Still, if there’s the chance of getting kids to read great authors by making said authors into comic book characters, then I have a few suggestions to offer:

THE SISTERS: Deep in the hills of Yorkshire, Anne, Emily and Charlotte roam the wild woods. But they’re not out sunning themselves and picking flowers. Instead, they’re methodically tracking down a horrific creature that hides in neighbors’ attics, with daggers hidden in the folds of their Victorian dresses.

THE BUG: Franz Kafka wakes after a long night of writing to find that giant, man-eating cockroaches have infested his apartment. He must kill them all — or risk becoming one of them.

THE MISFIT: There’s an evil killer on the loose, but young Flannery thinks that nothing bad could happen in her home town, Savannah, GA — until a man shows up on her mother’s doorstep with a big grin and a suitcase that won’t come unlocked, despite her best efforts.