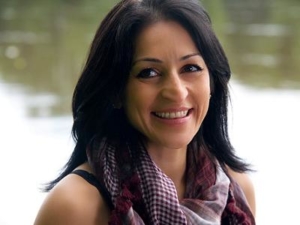 Susan Abulhawa began writing her first novel in 2002. The biologist-turned-novelist was inspired to write after she visited a Palestinian refugee camp that had been under siege by Israeli forces. Abulhawa felt strongly that she wanted to tell the refugees’ story. Her book, published in 2006, had a small first life in English. It was titled Scar of David and came out from Journey Publications shortly before the publisher shut down. A few events and a smattering of controversy marked its release. The book might have been forgotten, but things changed when it was picked up by a French publisher. The novel was successful in French, as well as several other languages — it was a best-seller in Norway — and was republished in English in 2010 under its French title, Mornings in Jenin. The book is now, in the spring of 2012, available in Abulhawa’s mother tongue: Arabic.

Marcia Lynx Qualey: What do you think about the Arabic translation?

Susan Abulhawa: Well, I don’t think my opinion really should be trusted in this matter, because I’m so close to it.

But what do you feel about it? Your visceral reaction to reading it.

Mixed feelings.  I mean, I’m so happy that it’s out in Arabic, but on the other hand I worry that it doesn’t have the same soul as the English. So much does get lost in translation. Because Arabic is so important to me, it was the most important translation to me. I wanted it, I guess, to have the same emotional content. And from all accounts, it seems that it does.  Again, my opinion cannot be trusted.

Some parts of it that I read, I felt like, Oh, wow, this is a really good translation of what I meant to say. And there were other parts that I felt probably don’t capture the poetry of the English language. I mean, I worked really hard on the prose. The prose to me is just as important as the story. And I wanted the integrity of that to be maintained.

Did you work with the translator?

We had a couple of phone conversations, but no. For the most part, no.

But you saw the final version?

I did, I read it. I didn’t read the very final draft, but I had read [an earlier draft], and I had made suggestions.

And in the end, you’re happy to have it in Arabic?

Initially, when you were writing the book, you imagined you were speaking to an English-language audience?

Well, I knew it was going to be, because I was writing it in English.

[Egyptian novelist] Ahdaf [Soueif] yesterday asked you several questions at your talk [at the Abu Dhabi International Book Fair]. One was about the intersection of “author and activist.” Do you see yourself as an activist first? Did you ever see the creative process as going in a different direction from your activism?

There’s a great deal of synergy between those two aspects of my writing. The truth is that is that I probably started writing this novel as an activist, but the minute that the characters appeared to me and sort of took shape and form, that part of me was completely gone. And it was then all about the characters; it was all about the story; it was all about literature. And it was all about narrating their story with humanity and with honesty and with poetry. In the early iterations, I would say the activist was a bit more prominent. But that very quickly disappeared, completely, from this project.

It was really as soon as . . . Once the characters really became real to me, it actually was no longer about activism. The activist in me just wasn’t there any more. I fell in love with the characters. I had a relationship with them. They were my priority, I wanted to tell their story with honesty. And to do that, I think you can’t have a political agenda. You can’t think of how the reader is going to react, you can’t think of what this will look like, you just can’t. Otherwise, I don’t think it would be good writing.

I saw in a 2010 interview that you’d said you had another book project.

I don’t work very quickly, so you shouldn’t look for it any time soon. But it’s a novel about a young boy in Gaza. That’s all I can say about ti.

In Olivia [Snaije]’s introduction [to your talk at the Abu Dhabi Book Fair], she said that a mentor had suggested that you had a memoir in you. Do you want to write that memoir?

Oh. I have written short pieces about my experiences. There’s an essay that’s coming out in this collection of essays by various Palestinian writers, it’s called Beyond Palestine. That piece draws quite a bit from a part of my life that I’ve never really talked about before. I’ve written essays about my experience in the Dar el Tifl orphanage; that’s in Mornings in Jenin. So I do write about my life. But not a memoir. I don’t think I have enough distance to really do it yet.

And the whole idea of a memoir, I’m not convinced of it yet. It feels too egotistical.

I like to meet new characters, to explore different ideas through characters that are fictitious. You can’t do that with a memoir. And the other thing is, it’s a lot easier to search and explore the lives of others than it is to do your own. Because I’m too close to it. In a lot of things, I don’t think I would write them in a way that’s appealing to anybody.

The book just came out within the last couple of days. Is this part of your tour around the region? You have other book events?

I did one in Amman just a few days ago. And we literally just discovered — it was very well attended, and it was in Arabic, and it was really nice, and people were saying, “We haven’t been able to find it in the bookstores,” and “it should’ve been in the bookstores.” We just found out that it’s apparently banned in Amman. Why don’t really know why.

It’s so annoying, because the English is not banned. And there was just a write-up in the Jordan Times about my event there.

It’s formally banned as far as I know.

If I had to guess, I would say it has to do with a tiny little line that really talks about the collusion between King Abdullah at the time and Golda Meir during 1967, which is actually pretty well documented, and it’s fact. I can’t say that for certain.

You’re going to be part of PalFest this year. Are you going to do any book events in Palestine?

Do you read in Arabic as well as in English?

I read some Arabic, but I’m actually starting to read more now. It started after I went to this conference in Oslo that brought a lot of Palestinian writers together. And then I picked up books by some of the writers at the conference, so I’m reading some of them.

And are you influenced by Arabic literature?

I think that, actually, in general, I think that my style of writing in English is on some level hugely influenced by Arabic. Even though English literature is what I read mostly. And I think . . . I’m not sure really how that happens. I’m guessing maybe because Arabic is really the first language that I learned to read and write. When I was younger, I used to write a lot of Arabic poetry. And so I’ve never published poetry, but I’ve written far more poetry than I’ve written anything else. None of it is published. I have volumes and volumes. Some of it is lost forever. So I had that influence early on.

And I would say it came through in the English. Which I heard from some people, Western readers only, that they felt at times it was too lofty, too verbose, too flowery.

But I like that style. I kind of like literature that uses a language that’s a little bit elevated. Maybe that comes from [how] in Arabic, you don’t write in the way you speak. So I think that came through in my novel.

So you write in fos7a [elevated, literary] English?

Some people wouldn’t like that, because they’d say Shakespeare is fos7a English.

Of course there are lots of registers in English.

It’s just not necessarily everyday language in some parts, [but] only because I worked really hard on the prose.

What sort of novels do you love to read?

For some reason, I end up reading a lot of South American authors. Like, one of my favorites that I tell people is this: the only book that I’ve read more than once, and I’ve actually read it four times, is 100 Years of Solitude. Nobody’s ever surprised when I say that. I like Isabella Allende. I like Nathaniel Hawthorne, actually. I like that style. And actually, if you look at all of them, they kind of share that thing that I was telling you about.

They don’t really adhere to that “show, don’t tell” concept that characterizes a lot of modern Western literature that’s really full of a lot of dialogue and sort of showing and not telling. I guess I’m more of a teller. I think sometimes, a writer can “tell” something in a way that no amount of showing . . . For example, Nathaniel Hawthorne, in The Scarlet Letter, there’s a line in there where he’s talking about the Puritans. And he just says — there’s this one single line that he wrote that describes just what they are. One line just gets to their essence, and it’s something to the effect of: They accomplished so much because they dreamed and imagined so little.* I mean, isn’t that perfect?

If you really try and search for the right words, some authors can really tell something. And again, that goes back to the elevated language.

*From The Scarlet Letter: “He was not ill fitted to be the head and representative of a community, which owed its origin and progress, and its present state of development, not to the impulses of youth, but to the stern and tempered energies of manhood, and the sombre sagacity of age; accomplishing so much, precisely because it imagined and hoped so little.”

A version of this interview originally appeared in ArabLit.