The Next Right Thing – Dan Barden 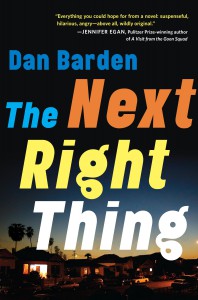 The swells were getting choppy, and the surfers would be pissed off, but there was a nice breeze here in the hills. And Terry was dead and I still couldn’t explain it. Jeep tossed me one of my own Arturo Fuentes.

The Next Right Thing, a hardboiled detective novel by Dan Barden, is noir, but noir with a twist. Instead of the world-weary private eye with a perpetual bottle of scotch in his desk drawer, the detective in The Next Right Thing is Randy Chalmers, a recovering alcoholic whose A.A. sponsor, the indomitable Terry Elias, has just been found dead of a heroin overdose in a sleazy Santa Ana motel. Nothing adds up — Terry is an A.A. recovery miracle, a successful lawyer fifteen years sober — and Randy suspects foul play. An ex-cop kicked off the Santa Ana force for excessive brutality, Randy now makes a living designing luxury homes in Laguna Beach; he lives with his girlfriend MP in a sweet mid-century-style ranch with a canyon view. But he’d give it all up for the answer to why and how Terry really died, and the pursuit puts him on the trail of hydroponic pot farms, recovery houses, secret families, crooked asset forfeiture deals, pornography, judges, and corrupt cops. The mis-en-scène is hilarious, both genre-perfect and a send-up of the genre: Randy’s dry drunk quest to solve the mystery of Terry’s death yanks him from the hard-won certainty of his comfortable life in Laguna Beach, and leads him inexorably back to Santa Ana and the demons of his past ruin.

This is a superbly paced and entertaining mystery. It’s also a comic novel about the culture of self-help and the impulse to self-destruction. Barden’s portrait of Southern California Alcoholics Anonymous, where people clap after you share, “whether they like you or not” and “sometimes because they don’t like you,” is a loving satire. The novel is peopled with recovering alcoholics — there is barely a character that doesn’t have a history of substance abuse — and they come in all flavors. Cops, yoga teachers, surfers, lawyers, reality television stars, teen runaways: everyone in Laguna has a past, and in the A.A. community, everyone else knows what that past is. They are a messy, vital support system, alternately cult-like and familial, issuing tough love with sharp-eyed intuition for one another’s missteps and transgressions.

Barden is a terrific comic writer, and he’s at his best with the contradictions of hardboiled characters spouting Twelve Step rhetoric. In the first chapter, Randy tries to give a black eye to a kid from A.A. named Troy Padilla and then, two pages later, reflects on suburban landscaping while getting bossed around by his business partner, Jeep:

I told myself again there was no way she could know about Troy Padilla. “Who told you about Wade?” I asked.
“I’m everybody’s den mother this week,” she said. “Yours, too. You look like shit.”
“The thing is,” I said, “I feel worse.”
We stood near the edge of my sister’s carp pond. We had both argued strenuously against it. But without Betsy’s carp pond, we wouldn’t have bisected the yard with a tight little man-made stream, exactly four inches across, which fed the carp pond. That got us into Dwell magazine.
“Am I here to look at something? Or is this where you take people when you want to ram some recovery up their ass?”
“The answer to both questions is yes,” Jeep said.

It’s a little like reading Carl Hiaasen doing a Raymond Chandler impression, but the fun of The Next Right Thing is that it doesn’t feel like an imitation of anything. Barden ventriloquizes the old classics, their patter and beats and the pith and wit of their one-liners, but his voice is original, and disarmingly so. The language has a playful, confectionery quality — lines like “the flower stand across the parking lot was a gang fight of color” and “Wade’s espresso tasted like you’d stuck your head in a bucket of scorpions” — yet it gets at reaches of emotion you don’t expect.

One of the pleasures of the novel is its veritable circus of cartoonish characters. Without Terry, whose gravitas cut a swath through the jokers that fill up A.A. meetings, Randy’s best friends are spectacularly, yet endearingly, annoying: Wade, the Laguna surfer (“You’re going to beat up some guy whose only crime is parking down the street from you? Don’t get all Patriot Act on me, dude.”); Troy, the college dropout and runaway Randy reluctantly takes under his wing after deciding not to beat him up; and Emma, a teenage reality TV star and aspiring recon marine. Aside from these eccentric sidekicks, highlights include Randy’s thirteen year-old daughter, a wise-ass fireworks-obsessed tomboy nicknamed Crash, and Jeep Mooney (“she wouldn’t say exactly how she got the name Jeep, but I bet it was a taunt she transcended”), his business partner and sister-in-law, at once imperious and crass.

As you might expect, the mystery in The Next Right Thing doubles as a recovery narrative. As Randy veers off-course from normal life in relentless pursuit of answers, he flashes back to his friendship with Terry, which chronicles the seven-year history of Randy’s sobriety. Terry is the A.A. evangelist, seeming to believe in every word of the A.A. recovery rhetoric — he’s able to transcend its platitudes and make it genuine and irresistible. The quest to solve the mystery of Terry’s death fuses with the frustrating attempt to unpack Terry’s teachings — sometimes scarily deluded, other times even more scarily prescient — about recovery and redemption.

If the novel gives a cunning critique of the rituals of self-help, it also takes an earnest look at the question of God, of how to find grace when you keep damaging yourself and the people around you. Admittedly this can, especially towards the end of the novel, verge on sententiousness. But Barden also gets at a kind of breathless wonder that comes with moral and spiritual bewilderment, from “those moments,” as Randy describes it, “like the moment Crash was born or the day I met MP — when the wall between my world and all the other worlds became impossibly thin, and I had to admit to myself that I didn’t know anything about what was going on.” The Next Right Thing is poised to be a small classic of the genre, but its best qualities are ones you don’t necessarily expect from noir: it’s hilarious and loving and completely unpretentious. I couldn’t put it down.