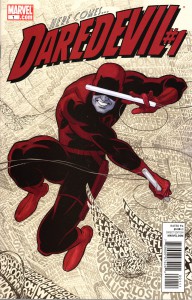 Comic book speech balloons are, according to David Carrier, “a great philosophical discovery.” In The Aesthetics of Comics Carrier makes the case that the speech balloon, visual and verbal at once, is the element that best defines the medium of comics.

If the speech balloon is the most comic-booky element of comic books, what about THOOMs and KAPOWs and BLAMs? Sound effects are the excited, obnoxious siblings of speech balloons, and are equally as associated with comics — especially superhero comics. Sounds like the THWIP of Spider-Man’s web-shooters and the SNIKT of Wolverine’s claws are so well-known they now function as character catchphrases.

These words aren’t contained in white balloons like dialogue or neatly boxed like narration. They’re scattered over the page in bright colors and enormous fonts. Often they’re added by the letterer, layered on top of the art. These effects look like they’re sitting outside of the action. They could almost be the sounds made by an excited child as they read along with Batman’s adventures. Or — yes, okay, fine — an excited adult. I’ll cover my embarrassment with academia: “Comics are read as if aloud,” writes Robert A. Petersen. In his article “The Acoustics of Manga,” he states that comics encourage the reader to “sound out the narrative.” Readers are always “performing the comic for themselves, just as a ventriloquist might bring a voice to a puppet.”

It’s this performative aspect that makes sound effects one of the strangest and silliest comic conventions to new readers, I think. It’s hard to take literature seriously when you’re sounding out consonant-heavy explosions. Part of the genius of Alan Moore and Dave Gibbon’s Watchmen was probably to leave all sound effects off the page; Rorschach’s spoken “hurms” are the closest you’ll see to onomatopoeia.

When comic artists provide their own sound effects, however, it can highlight the visual dimension of RATATATATs as well as the verbal. A perfect example of this arrived last year in Marvel’s reboot of their blind crime-fighter Daredevil. In fact, the cover of Daredevil #1 by Paola Rivera shows the hero swinging high above a world made entirely of words. Passing birds are formed of FLAP. Streets of SCREECH. Water tanks shaped out of GLUG and HISS.

Throughout the series, the sound of Daredevil’s partner eating junk food — KRONCH — becomes the corridor that carries him across to complain about that same noise. A boat explodes with FA-THOOM taking the shape of its target as though painted on its side. Bullets don’t make sound; the sound itself is the bullet – BUDDABUDDABUDDABUDDA – with the letters shattering his window as Daredevil dives for cover.

Daredevil is in no way the only comic to use techniques like these, and this isn’t meant to be a history lesson. Many artists over the years have integrated sound effects into the architecture of the page, whether inside the panels or through the shape of those panels. (I swear Sin City’s Frank Miller would only draw panels sculpted to spell B, L, A, and M if he could.) But Daredevil’s particular powers — heightened senses, a radar-like ability — seem to encourage the title’s best artists to experiment. Regular pencillers Paola Rivera and Marcos Martin have made it one of the best-looking superhero books on the shelves.

(Sadly Marcos Martin has already moved on, but the oncoming new artist Chris Samnee is also excellent. Mark Waid’s writing, deftly old-school without wallowing in nostalgia, will provide continuity between his artists.)

It did get me thinking, though, about how these sorts of sounds ring in our heads. If they’re presented an as integrated part of the comic book world, do we see them more and hear them less? Are they more concrete and more weighty — or do they now seem to belong more to the realm of the symbolic? Think of how the Hulk was crushed beneath the text of his own enormous logo on Jim Steranko’s 1968 cover for Hulk King-Size Special #1, or how the title of Will Eisner’s The Spirit would appear carved in stone or fluttering in paper, as if the city itself was saying his name. Maybe it was. God knows, stranger things than that happen in comic books.

Other artists have an even more playful relationship to spelling out sound. Bryan Lee O’Malley’s celebrated Scott Pilgrim uses video game logic to spell out things like GAME OVER in the air. Faith Erin Hicks’ comic Friends With Boys illustrates two brothers embracing with a MANLY HUG hanging over them. And Brandon Graham’s recently (and finally!) collected comic King City has characters clasping hands for the first time — and the word TRUST appearing next to them.

Is it meant to be a kind of disembodied narration? Or is it a representation of a noise like BANG or THWIP or SNIKT? Something only Daredevil’s heightened senses — and by extension, our own — could hear? I don’t know. I like to believe TRUST makes a sound.

Martyn Pedler is a writer and critic in Melbourne, Australia. He’s the regular comic book columnist for Bookslut and – for some reason – is writing tragic backstories for everyone who dies in the Steven Seagal movie Under Siege.