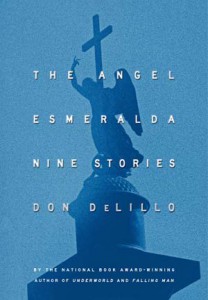 While promoting The Marriage Plot late last year, Jeffrey Eugenides spoke frequently about attempting to learn “a bunch of new skills” with each book. The Virgin Suicides served as a crash course in language and voice, Middlesex in plot, The Marriage Plot in expanding “the interior music of the characters’ lives.” His statement suggests that readers can chart a writer’s development book by book, across the often-significant gaps that exist between each publication. The nine stories of Don DeLillo’s recently published first collection The Angel Esmeralda, written within a 32-year span, collapses that prolonged progression. With pieces ranging from 1979 to 2011, it provides the opportunity for readers to examine a three-decade evolution in a little over 200 pages.

How appropriate, then, that DeLillo populates The Angel Esmeralda with characters who use language and stories to inspect the lives of other people. A couple in the opening story, “Creation,” spends dinner making up biographies of nearby diners. After witnessing the kidnapping of a small girl in a public park, the characters in “The Runner” try to imagine the reasoning behind the snatcher’s action. College chums in “Midnight in Dostoevsky” spend their free time creating a back-story for a mysterious man in a hooded coat seen wandering through town.

Whereas 1988’s “The Runner” tries to distill the way we use fiction to shield ourselves from harsh truths into eight pages, 2009’s “Midnight in Dostoevsky” expands a comparable premise into 28. DeLillo’s stories have not uniformly lengthened over time, but with each subsequent entry he has mined his characters with more insight and assurance than before, yielding literally or emotionally more expansive work. Much in the way Eugenides once relied on voice as a means to avert deeper characterization, DeLillo’s language has become less propelled by its author’s predilection for rhythm and more dedicated to honoring the rhythm of his characters. Consider these two passages, from “The Runner” and “Midnight in Dostoevsky,” respectively:

“I looked for you back there,” he said.

“I talked to a policeman.”

“Because actually seeing it, I couldn’t really grasp. It was so far-fetched. Seeing the child in that man’s grip. I think it was more violent than guns.”

“Doesn’t matter,” I said. “Because the guy was wearing a parka.”

“Anorak is an Inuit word.”

Where dialogue once read like competing, overlapping monologues, now it acutely mimics actual conversation. Gradually, DeLillo has pieced together the ways in which people really communicate. At his best, he lets his characters talk to each other, rather than pontificate in each other’s direction.

“Baader-Meinhof,” the collection’s strongest piece, marks DeLillo’s most exhilarating rendering of character. Rather than trying to constantly pinpoint emotions in other people, the main character in “Baader-Meinhof” redirects that scrutiny inward. The story concerns an unnamed woman and man who meet in an art gallery and wind up spending the day together. At first DeLillo portrays self-analysis as an observation of the other: “She didn’t know whether this was interesting or cruel but saw herself in the window wearing a grudging smile.” Later, however, upon learning that the man has an interview scheduled that day, the woman “wondered whether she wanted him to miss his interview. That couldn’t be what she wanted.” It is that journey from not knowing what other people want to not knowing what oneself wants, a journey into greater depths of uncertainty, that brings all of DeLillo’s talents and perceptions into fruition.

Alas, The Angel Esmeralda only occasionally dives this profoundly into such intense and enlightening interiority. In a sadly ironic twist, it is the stories where DeLillo most overtly stretches his imagination, lifting his characters out of New York and into extremely foreign territory, that these pieces start abandoning compelling characters for caricatures, overly broad satire, and conceits that quickly exhaust themselves. In 1983’s “Human Moments in World War III,” an astronaut orbiting Earth explains, “Together we count down from five and then turn the keys one-quarter left,” describing an interaction with one of the vessel’s machines. “This puts the system in what is called an open-minded mode. We count down from three. The enhanced voice says, You are open-minded now.” It’s too easy a joke, and one that makes the relentless seriousness of the story (“Earth orbit puts men into philosophical temper”) all the more exasperating – things are either too grim or too absurd, never a satisfying blend of the two. Ditto the 2010 story “Hammer and Sickle,” set in a white-collar prison full of Bernie Madoff-caliber criminals. Our narrator watches his ten and 12-year-old daughters deliver stock market reports on a children’s news program, and the gag feels worn and maddeningly blunt even before DeLillo waxes philosophical about it.

“The Starveling,” a 2011 story that concludes the collection, emphasizes DeLillo’s weaknesses and strengths in equal measure. The solitary protagonist of “The Starveling” follows a woman he notices in a movie theater, hoping to piece together an image of her life outside screening rooms. He finally approaches the young girl from the movie showing and delivers a impromptu monologue too at odds with his character and identical to DeLillo’s prose to feel plausible: “Something happened to my memory somewhere along the way. It’s because I don’t sleep well. Sleep and memory are intertwined.” In a way this misstep feels reassuring – no matter how far he’s come, DeLillo must grapple with his bad tendencies as a writer each time he revisits the form. And in some earlier passages in “The Starveling,” DeLillo reminds readers of how concisely and eloquently he can encapsulate moments, characters, relationships. In this case, he does it all in just four sentences:

They lived on nearly nothing, his wilted savings and her occasional flurries of work. They lived on habit, occupying long silences that were never tense or self-conscious. Other times, studying a playscript, she paced the floor, trying out voices, and he listened without comment. She used to give him haircuts but stopped.

Imagine what this guy could do in a novel.