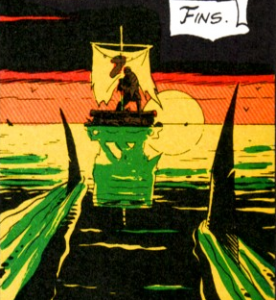 This past Wednesday The New York Times ran a piece on DC Comics’ plan to print Before Watchmen, a mini-series of prequels and back-stories to Alan Moore and Dave Gibbons’ acclaimed 1986 comic Watchmen. Scheduled to start this summer, the seven new installments will be penned and inked by a group of writers and illustrators attempting to, in the words of DC’s co-publishers, “keep all of our characters relevant.” Gibbons reacted to the news gracefully, noting in a statement that he appreciates “DC’s reasons for this initiative and the wish of the artists and writers involved to pay tribute to our work. May these new additions have the success they desire.”

Moore, on the other hand, has characteristically derided the project. The Times saved his most infuriating reason for last:

[Moore said] that the endeavor only weakened the argument that comics were an authentic form of literature.

“As far as I know,” he said, “there weren’t that many prequels or sequels to ‘Moby-Dick.’”

His egotistical comparison to Melville aside (of which I can’t say anything remotely constructive), Moore is simply dead wrong that prequels and sequels diminish a work’s literary quality. Roth’s Nathan Zuckerman, Updike’s Rabbit Angstrom, Marilynne Robinson’s companion pieces Gilead and Home — all grant readers opportunities to revisit characters or stories from new perspectives (different ages in Roth and Updike, different narrators recounting the same events in Robinson). This is precisely what Before Watchmen proposes to do. Writers also frequently re-imagine works of other authors. In “Pip Adrift,” from his story collection The Ring of Brightest Angels Around Heaven, Rick Moody creates his own version of the titular character’s time lost at sea. Pip’s shipmates initially abandon him after he leaps overboard upon spotting a whale, and when they return for him they discover he has descended into madness. Any guesses from which classic novel Pip drifted into Moody’s imagination?

In the same Times piece, Jonathan Lethem points out that Moore often litters his work with literary references. Nowhere in my reading of Moore has that seemed clearer than the first volume of Saga of the Swamp Thing, which features an out of nowhere cameo by the Justice League of America. Moore can drop the entire DC Comics universe into his own narrative, so his argument goes, but DC Comics should never be permitted to expand Moore’s narratives into their own universe. I sympathize with Moore’s complaints over the film adaptations of his work, Watchmen especially – the novel’s complex narration and intricate back-stories get muddled when you try condensing it in two and a half hours. But there’s a difference between lamenting the compression of your work into film and lamenting its expansion in its original comic medium.

Though Moore told the Times he signed “draconian contracts” with DC, nobody forced him to. Even petitions against the new crop of stories suggest Moore made a conscious decision and DC is acting completely within its legal rights. Furthermore, nobody will forget or dismiss Moore’s contribution to the comic form, nor will they likely confuse these new installments for Moore’s own work. Ultimately the success of the Watchmen prequels hinge not on Moore’s claim to artistic integrity, but on whether fans decide to fiscally support it and treat it as part of the Watchmen legacy.