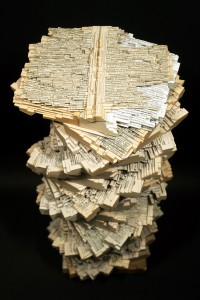 In a Wall Street Journal article last week, Nicolas Carr detailed the pros and cons of infinitely editing e-books through Amazon’s Kindle Direct Publishing service. “The endless malleability of digital writing” holds many attractions for Carr — historians can update their work with recent research, novelists can keep their fiction free of “the little anachronisms that can make even a recently published story feel dated.” What Carr worries readers and writers will lose, however, “is the sense of a book as a finished and complete object, a self-contained work of art.”

Let’s work backwards here. The “sense” of books as “finished and complete” or “self-contained” is precisely that — a sense and nothing more. For Christmas this year I purchased my mother a 75th anniversary edition of The Joy of Cooking, whose 500 new recipes displaced a handful of dishes that supposedly lack contemporary relevance. Nonfiction writers publish revised editions of their work all the time, or, in the case of a writer like Chuck Klosterman, print bonus essays when those volumes arrive in paperback.

Such malleability applies to fiction writers, too. In a 2008 interview, Bookworm host Michael Silverblatt asked Tobias Wolff if a final or “frozen” version of his work would ever hit shelves. Wolff responded: “Not as long as I can get at them again…. These stories have been in a continual state of evolution since I first wrote them, so there really never was that pristine text that I have betrayed by revising it.” For Wolff, each printed version of his work never represents “a self-contained work of art” — they’re new entries in an evolving organism.

When Wolff revises his fiction, he looks for sentences, phrases or words that no longer service the story the way he once thought they did, not Carr’s “little anachronisms” that allegedly date the piece detrimentally. Contrast Wolff’s discerning revisions to Allen Gribben’s replacement of “nigger” with “slave” in his updated version of Mark Twain’s The Adventures of Huckleberry Finn. The response to Gribben’s edit was overwhelmingly negative, and rightfully so. The contemporary relevancy of Huck Finn is contingent on what Gribben considered an outdated or inappropriate noun for contemporary audiences. Twain’s language should evoke the time in which it was written, not the time in which we opted to tweak it.

Such amending does equal disservice to nonfiction. Carr is right to champion digital publishing for its swift correction of factual errors, but his eagerness for historians and biographers to continually alter their books in light of recent events again ignores our need for the outdated. When David Foster Wallace republished his 2000 article on John McCain in 2008, its inaccuracies were the key to its relevance — voters could compare the idealism of the 2000 Straight Talk Express McCain with the cynicism of his 2008 bid. That Wallace did not re-edit his work to reflect McCain’s change made his the writing all the more powerful. It was up to the reader to discern McCain’s transformation, not up to Wallace to point it out.

If books are “finished and complete” objects in any sense, they are complete pieces in the epic Wolffian evolutionary chart, where we can line up each published draft of a story and chronicle its growth and maturation from first to latest publication. When books go from “being stamped permanently on sheets of paper to being rendered temporarily on flickering screens,” as Carr eloquently puts it, we lose all sense of that progress. We need supposedly “self-contained,” outdated works to remind us of the process by which we arrived at the most accurate and contemporary works. If change becomes as easy as the rewriting of a digital document, we’ll only be able to see where we are. We’ll have no clue where we’ve been.