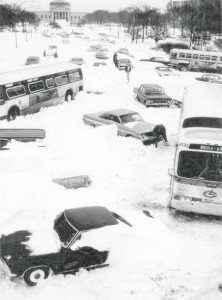 I find myself consistently shocked by the continuation of winter after the new year. Having grown up in New England, I’m not sure how I’m not used to it. With each passing year, though, I am somehow more surprised than the last at the arrival of temperatures below 30F. This year, I’ve developed a new ability to estimate the time of day based on the position of the setting sun, so keenly do I feel the pain of that early, early sunset. (Seriously. 3:30? Did this actually happen last year, or ever?)

While I understand the necessity of the dark and snowy winter days and nights during the holidays/festivals of light, it somehow feels a great injustice when the season continues onward after they’re over. Does January really need to be this dreary? Why does February exist? (I say this with a February birthday: that month and its weather is not strictly necessary.) Could we adjust the tilt of the earth’s axis, please?

In an attempt to develop a coping strategy, I’ve gathered some inspiring wintery quotes to see if I can change my thinking about the season. I have serious doubts that I’ll ever love (or even like!) winter, but perhaps these words will give me something else to ponder besides the season’s cold, icy grip on my psyche.

“The sight of snow made her think how beautiful and short life is and how, in spite of all their enmities, people have so very much in common; measured against eternity and the greatness of creation, the world in which they lived was narrow. That’s why snow drew people together. It was as if snow cast a veil over hatreds, greed, and wrath and made everyone feel close to one another.” ― Orhan Pamuk, Snow

“Once upon a time in the dead of winter in the Dakota Territory, Theodore Roosevelt took off in a makeshift boat down the Little Missouri River in pursuit of a couple of thieves who had stolen his prized rowboat. After several days on the river, he caught up and got the draw on them with his trusty Winchester, at which point they surrendered. Then Roosevelt set off in a borrowed wagon to haul the thieves cross-country to justice. They headed across the snow-covered wastes of the Badlands to the railhead at Dickinson, and Roosevelt walked the whole way, the entire 40 miles. It was an astonishing feat, what might be called a defining moment in Roosevelt’s eventful life. But what makes it especially memorable is that during that time, he managed to read all of Anna Karenina. I often think of that when I hear people say they haven’t time to read.” ― David McCullough

“Winter is on my head, but eternal spring is in my heart.” ― Victor Hugo

“I know the look of an apple that is roasting and sizzling on the hearth on a winter’s evening, and I know the comfort that comes of eating it hot, along with some sugar and a drench of cream… I know how the nuts taken in conjunction with winter apples, cider, and doughnuts, make old people’s tales and old jokes sound fresh and crisp and enchanting.” ― Mark Twain

“LA is the loneliest and most brutal of American cities; NY gets god-awful cold in the winter but there’s a feeling of wacky comradeship somewhere in some streets.” ― Jack Kerouac, On the Road

“I prefer winter and fall, when you can feel the bone structure in the landscape — the loneliness of it — the dead feeling of winter. Something waits beneath it — the whole story doesn’t show.”
― Andrew Wyeth

“Age certainly hadn’t conferred any smarts on me. Character maybe, but mediocrity is a constant, as one Russian writer put it. Russian writers have a way with aphorisms. They probably spend all winter thinking them up.” ― Haruki Murakami, A Wild Sheep Chase

“What good is the warmth of summer, without the cold of winter to give it sweetness.” — John Steinbeck, Travels With Charley

“She tells her love while half asleep,
In the dark hours,
With half-words whispered low:
As Earth stirs in her winter sleep
And puts out grass and flowers
Despite the snow,
Despite the falling snow.” ― Robert Graves

“In winter we lead a more inward life. Our hearts are warm and cheery, like cottages under drifts, whose windows and doors are half concealed, but from whose chimneys the smoke cheerfully ascends.” Henry David Thoreau, “A Winter’s Walk.”

“Winter is coming.” ― George R.R. Martin, A Game of Thrones

(Also, I discovered that watching Russian ice swimmers makes me feel a lot colder, in sympathy, so I wonder if by watching them I am also reaping by proxy the sport’s many rumored health and mental benefits.)

Image at top is of Lakeshore Drive during Chicago’s great snow storm of 1967. Via.