A Flurry of Rituals 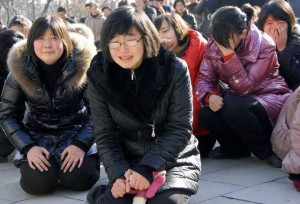 “Until the twentieth century,” Meghan O’Rourke writes in her 2010 essay “Good Grief,” “private grief and public mourning were allied in most cultures.” Loss used to sweep grievers “into a flurry of rituals” — mourning clothes and religious bereavement ceremonies that lasted for days. Psychoanalytic focus on individual experience over communal, O’Rourke reasons, redefined grief “as something fundamentally private and individual. In a stroke, the work of mourning had become internalized.” Citing British psychoanalyst Darian Leader, O’Rourke suggests that the remnants of public mourning can be found in reactions to celebrity and statesmen deaths, though few places elsewhere.

Since Christopher Hitchens died this past Friday at age 62 from esophageal cancer, I’ve found it difficult to do anything but scan the Internet for remembrances.* Vanity Fair, The Atlantic, and Slate all rounded up appraisals and favorite columns; Arts and Letters Daily kept Hitchens’ passing as their top article of note for three days straight, congregating additional pieces as they were published. One after the other, almost addictively, I poured through them, absorbing innumerable stories and tributes to a person I never knew and only read intermittently. Afterward I thought I knew him no more or less — reading more than a dozen of memories and reflection did nothing to paint a precise portrait of the departed. As Salon’s Glenn Greenwald reminds us, remembrances, given their emotionally charged nature, fail to accurately shape any deceased figure, especially one as politically and personally polarizing as Hitchens.

What they succeed in doing, however, is concocting a contemporary “flurry of rituals” by stitching private grief and public mourning back together. When Andrew Sullivan shared email exchanges between himself and Hitchens, for instance, he simultaneously engaged in public and private mourning; public because he disclosed those excerpts for any interested parties to see, private because he chose to relay the solitary interchange between writer and reader. Sullivan’s piece does not resurrect the brutally honest Six Feet Under-style bereavement ritual, but it comes damn close.

That Hitchens kept extremely good company with so many acclaimed writers makes his postscripts even more indebted to the notion of ritual. Ian McEwan, Julian Barnes, Christopher Buckley, Benjamin Kunkel — Hitchens’ inner circle and peers have all dedicated at least a facet of their life to the ritual of writing. Those in hysterics over the death of Michael Jackson or Kim Jong-il may conjure the closest primal echo of early mourning, but within the columns of newspapers and magazines, mourning most consistently resurrects former public rituals. Each remembrance reminds us how far we have strayed from pre-20th-century mourning, and how hesitant we are to inch toward those ceremonies again. If donning mourning garments and enacting mourning rituals has become too uncomfortable to bear, the ritual of spilling ink will have to do.

*I’m not using “remembrance” and “obituary” interchangeably here. I’m interested in recollections from friends and colleagues of the departed written within days of that individual’s passing, not assigned newspaper obits that summarize a figure’s lifetime.