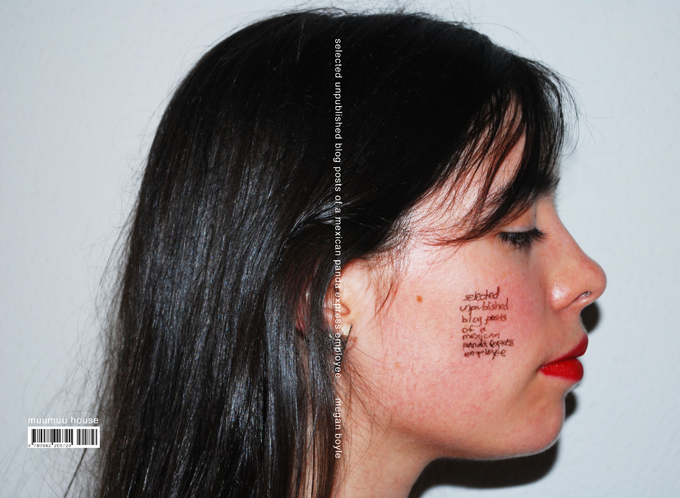 I’m not sure how to start this. Let’s try a summary. Megan Boyle has a new book of poetry out from Muumuu House. It’s called selected unpublished blog posts of a mexican panda express employee, and that’s exactly what it is. These are blogposts–lists, rants, descriptions–posted, we assume, by the author. We get details about Boyle’s sex life, self doubt, and sleeping habits; drug and alcohol usage; scenes from movies she’s watching, books she’s reading, and philosophies she’s studying; sketches of hipster culture in Baltimore at parties, gatherings, and bars; and reflections on her relationships with family and friends. In sum, this is Megan Boyle being Megan Boyle.

What next. To be honest I started reading the book the night they killed Troy Davis. My girlfriend Erica and I watched the live stream on Air America from outside the prison. We saw people hoping and praying and arguing. We saw them praise God and hug each other when the government granted Davis a temporary stay. We saw them weep when, a few hours later, they decided to kill him and killed him.

Nothing made much sense then. Time was thin. Things contracted. We watched the ‘viewer counter’ on the bottom of the screen drop dramatically as local reporters who’d witnessed the execution announced their observations into a microphone at a press conference. They talked about what it was like to watch Davis die.

We turned the computer off and stared. Erica went to the bathroom to be alone for a minute, I think. Lying on our bed I looked down at the floor and saw selected blogposts, which I’d placed there before we started watching. I picked up the book, just to see. The first line is “i could never be a sports writer, unless my assignment was to write ‘sports sports sports sports sports’ for three pages.” (ed. note: That reminds me of this clip from The Simpsons)

I don’t remember my reaction, exactly. I think I was angry, disappointed, terrified, anxious, and in an early stage of absurd calm. Independently of my unique circumstance the sentence is self-absorbed, writer-centered, and fecklessly ironic; which, if there’s anything negative to say about the book, it’s those three descriptions. But I kept reading like I keep reading anything, but particularly like I keep reading Tao Lin-esque writing: with the small sense that there’s a somethingness unique to people like me living right now.

After a paragraph about humans “playing with cat toys the way cats play with cat toys” there’s a list whose informal title is “here are some of my favorite things to feel.” The third thing on that list is “standing in an extremely hot shower and feeling warm all over.”

I felt it. I was there. Behind a crappy shower curtain. Steam everywhere. Water rushing. Heat and warmth and comfort and safety. I thought to myself: yeah, that is nice.

It’s not that I wasn’t thinking about Troy Davis. I was. But what I felt at that moment was that sense that being human is being ‘a little’ (a qualifier repeated throughout the book). These tiny moments, likes and dislikes–life itself–is what they took from Troy Davis, and I lamented his execution by focusing on how he felt these things too at some point. The smallness of them. That we share that, whatever it is. Somehow, having read that line about the shower, I felt so angry that I became less angry; so scared that I became less scared; so absurd that I became less absurd.

Erica came in and saw what I was reading, her face red with emotion.

“It’s pretty good,” I said, putting it down.

That’s how I became a fan of the book.

I didn’t read the rest of it voraciously. I kept it by the bed, reading a few entries before sleeping. I liked it more and more as I went on. A character came through in the writing. Boyle’s character I guess. By character I mean something like ‘morality’s clothes’, a living way of life.

It’s not that I wanted to know what would happen next. Nothing happens, really. Life happens. In exactly the order that it happens: pre-stylistically, pre-reflectively, pre-literarily. (That’s a pretty good way to describe the style: ‘pre-style’, like Bolano but sans modernity.) It’s the self as self; as whatever it is. A little thing. Not much, as Lyotard says. The book is a constant reminder of this not-much self. A window into one tiny noumena (as Lin has written) and thereby an occasion to wonder “what am I right now?”

Here you are trying so hard to be and these people just are. And they’re popular enough that you buy their books and read them! Sentences like

“i think i have a dairy problem/ john stamos is on ‘e.r.’ right now, what is he doing on ‘e.r.,’ seems really bizarre”

“i have jet lag but i haven’t been on an airplane in months/ i want to be on an airplane/ my life feels hopeless/ no it doesn’t, i don’t know what i mean”

What is this hipster bird shit? Who are these people? you may ask. You probably get more frustrated when you feel (not think or see, but feel) that the answer to these questions is profanely simple. The answer is the writing. It’s exactly what it is. That’s exactly who they are: themselves. And here you are demanding something more of them. As if anything more than what we are matters. As if we’re anything more than bundles of questions, feelings, and weakness. As if wanting to be anything else has gotten us anything except governments that enforce the death penalty.

I’m not sure how to end this. That feels like a good place to stop. I’ll just say I miss this book now that I’ve finished it. I’m rereading passages just to feel like it’s not over yet. Reading it makes me feel fond. Fond of the author, fond of her genre, and fond somehow of our little white lives here in this global world of suffering.