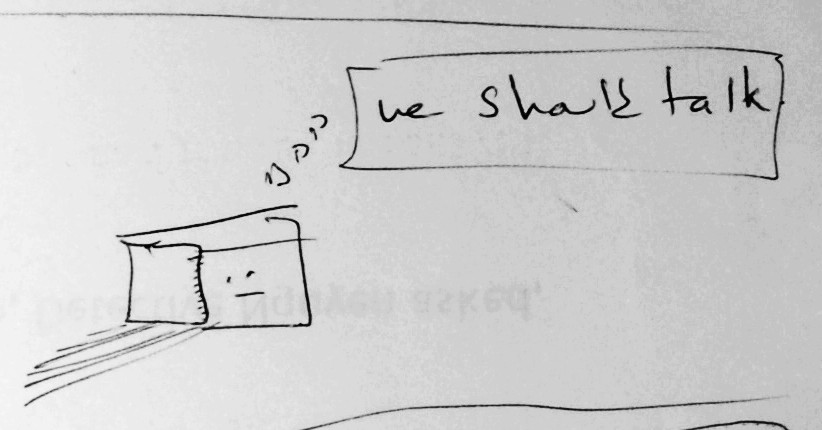 I like this story but there are somethings I’d change about it. I love the questionnaire that has questions like “When to kill, when to kill completely, when not to kill?” Also the italicized vignettes about divorcees and cyclopses. Also the demanding tone. And the exact dimension of inquiry the story undertakes: weeding. But there’s a phrase I don’t like: “what I really want to say is.” This iterates throughout. I’d take it out. I thought about taking it out as I read. Also I thought the narrator should’ve been the divorced wife, not just a dispassionate third party. Also I don’t like the word ‘apple’ in the last sentence. Is this inappropriate? Should I just accept the story as it is, without finding little things I don’t like about it? Should I not want to tweak it so it fits my worldview? Should I just sit back and let the tiny injustices and imperfections stand unaddressed? Should I just let them go? Shouldn’t I make the world I encounter, that frustrating and absurd amalgam of annoyances and flourishes, feel more like a home for me? So it feels well-tended? So I feel like I’m doing my best to make it the way I think it should be? So it looks “nice”? So there’s no clutter? So whatever is there belongs there: in your story, on the sidewalk, on your body, etc? Everything I see I want to change so it’s perfect. So it’s the way I think it should be. People, places, things, feelings–I weed them all. Which is the wonderful point of this story. —David Backer

Ben Spivey’s sentences gallop over your teeth like mules. Well, you should stop eating them!!! Do not put Ben Spivey’s sentences in your mouth, even if you’re teething and “uncomfortable.” Sentences such as these: “The children were sucking her tired breasts in the damp darkness as she felt her shape. … They wiped spoilage of milk from their lips with their thin fingers, never looking at the door.” It kind of reminds me of my all-time favorite resource book, “Mothering the New Mother: Women’s Feelings & Needs After Childbirth.” But darker. Wait until you hear what the children sing. With this one, Ben Spivey has earned himself eight noodles and a bell!

In the post-modern world, where limits are destroyed on a daily basis, transgression is hard — unless you’re Jason Michel. Then it not only comes naturally, it’s your life’s calling. In “The Wild Hunt,” Michel does not mess around: He comes for your eyes with claws of prose, edged to a monofilament extreme – extreme vileness and extreme intellectualism. As the work on his ferocious journal, Pulp Metal Magazine, uncompromisingly supports, Michel exults in the highest of high-minded writing and the lowest of low subjects. No work is too rarified or too raunchy. “Wild Hunt” shows Michel exercising these principles at his most muscular, with punchy sentences that will soil your mind one moment while elevating it the next. The story is uncomfortable, it is beautiful and it is not going to apologize for either. That makes it impossible to pass up.–M. C. Funk