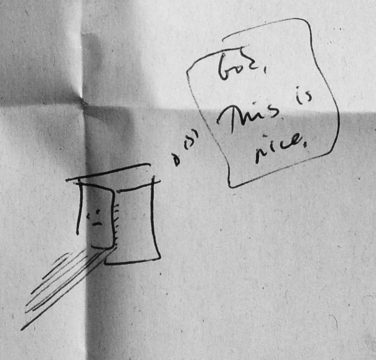 “We nod to each other and turn around” by Beth Bosworth, Babel Fruit

There’s a feeling of fall now so I’m ‘under the influence’ as Babel Fruit’s tagline sings. But this story feels like fall. When the warm goes cold all around and I’ve forgotten how it creeps to every part of my skin, with no heat to retreat to like there is in summer and late summer. In that change I get despondent even though I love it. Despondence despite love. Sadness despite desire. We call that longing, I think. I feel longing in fall. And the word always gets me: fall. What’s falling? What falls when fall falls? What fell? This story tells us. No wait. It doesn’t tell us. It shows us. I couldn’t point to a line where Beth Bosworth tells me straight about fall falling. I just see the main character and her ex-husband walking around in the cold. Their breath evaporating. Pine. Names scribbled on wood paneling. An ex-husband. A memory of an ex-husband. That’s perfect, isn’t it? A commitment to a man gone wrong, fled-from, and a memory bringing us back to it, to when things were alright. What are we when we have this memory, this nostalgic retrospection on the man we once loved but have since left? Fall.–David Backer

In “Cicadas,” Dow Ford does poetic justice – artfully, efficiently, with just the sardonic, emotionally neutered delivery the story requires. He lets some cicadas loose in there. Screeching. There is nowhere Dow won’t go. No direction he won’t take. No forklift he won’t include. There’s tenderness too. Who has Harlan’s eye? Dow’s final line will make you thankful we still have Oak Grove, Mississippi, and all its barely living creatures.–Ryan Nelson

Rode shotgun with William Dylan Powell yet? Well, saddle up already. This Texas brute is pumping high-octane stuff into the genre, and “Road Kill” is no exception. With “Road Kill,” William Dylan Powell showcases his top traits – a command of how lean, jabbing language can leave a better bruise than long sentences; a grasp of character so tight that it squeezes gems into short column space; and a zany sense of setting that finds a dirty realism in its borderline surrealism. He’s crazy, pithy and powerful. And he’s worthy of your read, so rush right out and ride with “Road Kill.”–M. C. Funk