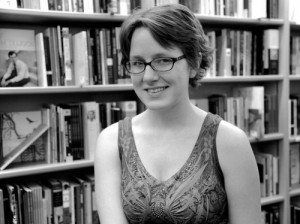 Michele Filgate is one of the busiest people I know: she’s the events coordinator at McNally Jackson, a book store in Manhattan; she runs one of the most popular and insightful Twitter feeds; and she regularly contributes sharp, lively criticism to a number of outlets, including Bookslut and The Minneapolis Star Tribune. Michele tells me that she particularly enjoys “being able to draw attention to a book that is under the radar,” and that seems like a pretty accurate description of her criticism and her Tweeting: she’s very discerning and extremely generous. Michele Filgate answered questions over e-mail as part of our Young Critics interview series.

The word “youth” can lend itself to immaturity, naiveté, and lofty ambition. But it also brings to mind energy, risk-taking, and freakish persistence. Of course, the same can be said about “older” writers and critics, too. I see “young” and “old” writers on a Venn diagram, where the circles overlap.  I think it’s crucial to fight against ageism in the literary world. There are plenty of older writers and reviewers who got a late start, and their life experience is part of what makes them absolutely brilliant at telling stories or offering a critical perspective. I’ll never forget listening to a bunch of MFA students reading from their work. The best writer in the room was a woman in her 40’s or 50’s. Her poetry was shockingly beautiful.

You imply that critics are paying attention to age and that ageism is sometimes an issue. Why?

Certain critics seem to buy into the whole “this person is young and can’t possibly have the life experience necessary to write a major work of fiction” fallacy.  To that, I say bullshit. I’d love for someone to conduct an experiment where critics are given manuscripts or books and the author’s name/biographical information is kept from them. I wonder if that would impact reviews at all.

I’m 27, so technically I am young—but I feel like an old soul trapped in the body of a twenty-something. I’d rather stay home and read or write on a Saturday night than go to a bar.

I’m a reader and a writer, so it was a natural fit. I spent a lot of time reading Bookslut, The New York Times Book Review, and other respected publications, and I also spent a lot of time as a bookseller voicing my opinions on books to whoever would listen. As a critic, I particularly enjoy being able to draw attention to a book that is under the radar.

Why and how did you start working at bookstores?

As a kid, I couldn’t think of anything more exciting than going to a bookstore. I still feel that way. I wanted to be a part of one, and I got an early start when I was in middle school. I volunteered at the local indie by shelving books in exchange for a staff discount.

Does working as an events coordinator influence your writing career? What are the advantages? Are there disadvantages?

Definitely. I see my job as my own self-designed MFA program. I get to hear some of my favorite writers read from their work, and I get to ask them key questions about their writing process. I also get to see what works and doesn’t work at an author reading, so I’ll be a pro once I’m a published author someday.  I don’t really think there are any disadvantages to my job.

What works and doesn’t work at an author reading?

I think the standard “here is an author reading from their work in front of an audience” format doesn’t work as well anymore.Readers want to be able to engage with the author. They also want to be entertained. I love the Q&A format, where an author is interviewed by another artist. A couple of things authors should avoid when reading at an indie bookstore: don’t encourage customers to buy the book from Amazon, and don’t read for longer than a half hour (twenty minutes seems to be the magic number).

I wrote some absolutely TERRIBLE short stories as an undergraduate. Now that five years have passed since I graduated, I realize how awful those stories were. I think every writer starts out with work that mortifies them. The fiction I’m working on now is (I hope) much, much better.

Only one? That’s not fair! Perhaps on my arm: “What wouldn’t I give now for a never-changing map of the ever-constant ineffable? To possess, as it were, an atlas of clouds.”- from the brilliant CLOUD ATLAS by the brilliant David Mitchell.

Definitely Michael Dirda. I admire his brain, and his writing. He has to be one of the top ten most well-read people alive.

We lived with my grandmother, who is also a voracious reader. Mimo was fired from her first job when she was a teenager because she was caught reading behind a clothing rack. I love that story. We used to go to the library sales and buy a crazy amount of books. In most of the home videos I’ve seen of myself as a kid, I’m carrying a book around with me. I was raised to believe that books were as much a part of life as breathing. I want to be able to move people with my words the way that other authors have done for me. That’s why I’m a writer.

God yes. Especially because I was raised in a Catholic family, and I don’t believe in organized religion. It’s pathetic to say, but when I think about death, I think about a black, empty void. Depressing, right?

I have so many of them! Just to name a few: Emma Straub, Allison Devers, Téa Obreht, Jacob Silverman, Michael Schaub, Benjamin Hale, Tim Horvath, and Emily St. John Mandel. Full disclosure: Some of those writers are my friends, too.

Some of the best books that have ever been written are being edited or published as I type this. That’s a thrilling thing to think about. I hate when people look back on a certain era as the best time for literature. The age we live in is always a promising time for the book, and especially the novel. There are plenty of writers willing to take risks–to write books that speak to their own emotional truths. The future classics are being conceived of or worked on or published every year. Clearly, I’m an optimist–but I recently read Anna Karenina and think that some contemporary novels are just as good or even better than Tolstoy.

I’m ambivalent about it. Last month, I was on the train and realized that I left my copy of Anna Karenina at home. I downloaded an e-book and started to read it. After a few minutes, I forgot I was reading on an electronic device. Yet when I got home, I immediately switched back to the paper version. Call me old fashioned, but there’s nothing like holding an actual book in your hands. I’m a bookseller, though, and have to be on the frontline of technological advances. I recognize that some readers prefer e-books, and I’m glad they have that option. I work at a bookstore that offers e-books through its website.

Do you use social networking sites?  How do they affect you and your work?

Poets & Writers just listed me as one of the top 33 Twitter feeds. Does that tell you something? :p I love Twitter and Facebook, because I’ve connected with so many other writers and readers. It’s wonderful to know that whenever I’m feeling lonely or stuck, I can procrastinate or get support from my friends who are only a Tweet or Facebook status away.

I don’t think it has changed, per se. Critics are doing what they have always done, but on a much bigger canvas. It’s old news that newspaper book review sections aren’t as numerous as they used to be. Many websites have popped up that are devoted to criticism–including some wonderful book blogs. Places that I write for or have written for, like Bookslut and The Quarterly Conversation, are intelligent, discerning publications that readers can count on for knowledgeable reviews.  There are still editors out there fighting the good fight, like Laurie Hertzel of The Star Tribune. I’m honored to write for her, and take part in the cultural conversation. That’s what being a critic is all about.

Review of Tinkers by Paul Harding

Review of Stone Upon Stone by Wieslaw Mysliwski