Free Swartz! (In the Event that He is Imprisoned!!) 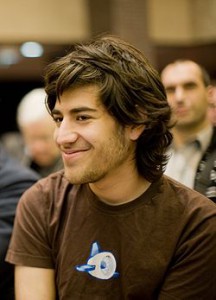 In what has to be one of the shittiest moments in US copyright/cybertheft/copyleft history (a history comprised mostly of shitty, callow, wrongheaded moments) 24 year old webhead Aaron Swartz was arrested on charges of “wire fraud, computer fraud, ‘unlawfully obtaining information from,’ and ‘recklessly damaging’ a ‘protected computer.'” Swartz, the former co-owner of Reddit, is being charged with downloading 4.8 million articles from the online academic journal archive JSTOR and defying MIT’s efforts to stop him. According to Guernica, Swartz faces “a maximum penalty of $1 million and 35 years in prison in spite of the (uncontested) facts that the data he allegedly purloined was returned before it was released; service interruption was minimal; and neither MIT nor JSTOR has taken legal action.”

Among the articles downloaded were high profile blockbusters like Carla J. Dove’s “A Descriptive and Phylogenetic Analysis of Plumulaceous Feather Characters in Charadriiformes” (arguably the Chinese Democracy of articles on Plumulaceous Feather Characters in Charadriiformes) and Jiming Jiang’s much hyped “Metaphase and Interphase Fluorescence in situ Hybridization Mapping of the Rice Genome with Bacterial Artificial Chromosomes,” both basically ca$h money. (<—just kidding).(but seriously—>)

Swartz’s motives for pulling off the nerdiest heist in history (think Oceans 1101001111101) aren’t clear at the moment (what does one do with 4.8 million jargon-filled, crowd pleasing page turners, each with its own delicious, tearjerker of a subheading????) but the US Attorney for Massachusetts doesn’t seem much interested: “Stealing is stealing, whether you use a computer command or a crowbar, and whether you take documents, data, or dollars,” sez Carmen M. Ortiz.

Simply stating the absolute equivalence between digital crime and real world crime is a fairly common and wholly pathetic rhetorical gesture that attempts to whitewash the complexities that come with the digital. It’s one thing to say that downloading 4.8 million journal articles is a crime, it’s another thing to moronically imply that there is no difference between downloading 4.8 million journal articles and breaking into a building (with a crowbar!) and physically stealing 4.8 million articles; it is obvious that there is a connection between these two concepts, but equally obvious that they are not identical. Acting as if they are belies our legal system’s recourse to blunt reduction in such matters as well as its general inability to effectively and fairly police the digital sphere. It’s obvious that technology is evolving faster than the laws that govern it, but depressing that our government’s recourse is (typically) brutish atavism.

Not surprisingly, folks on the internet disagree with the charges and a lot of them are calling bullshit on the fed’s response, specifically its severity and air of scapegoating (Anonymous running through your fingers? 4chan nerds sending your SWAT teams to the wrong house? nail the techno-hippy!). Check out Anterotesis’ breakdown of JSTOR’s economic structure, Guernica’s impassioned plea on Swartz’s behalf, Ars Technica’s detailed description of the data harvest and head to Demand Progress to show support for Aaron.