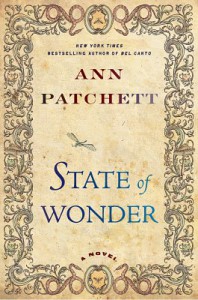 State of Wonder is Patchett’s most recent novel, and it establishes her as one of our most gifted writers of novels with real beginnings, middles and ends, novels of engrossing narrative velocity that come to surprising and almost primally satisfying resolution.  An adventure story of almost ungainly imagination, State of Wonder is set on a remote island of the Amazon.  Here, the fictional Lakashi tribe possesses an unusual elixir of life – their women can bear children into old age.  Presiding over the Lakashi and a corps of international medical researchers is the formidable Dr. Annick Swenson, the novel’s mad scientist, who has gone rogue from the pharmaceutical company funding her research on a reproductive drug.   When Anders Eckman, the researcher sent by the pharmaceutical company to report on her progress, dies of a strange malarial fever, our unlikely heroine Marina Singh is called upon to collect information on his death and finish his work.

State of Wonder is Patchett’s sixth in a steady stream of excellent novels full of signs and wonders: a magician’s assistant whose dead friends speak to her in her dreams (The Magician’s Assistant, 1997); a hostage situation during which an American opera singer, a Japanese businessman and South American terrorists become friends and fall in love (Bel Canto, 2001).  Yet the wondrous quality in Patchett’s novels comes from her writing, quiet, warm, and sure.  Disarmingly incapable of affectation, she never confuses style with a special effect.  She works methodically, like the magician, without drawing attention to the actual labor of craft, and so, by seeming to erase her steps, she can create the effect of pure narrative thrall.

In State of Wonder, Patchett faces squarely the questions about medical ethics, imperialism and the pharmaceutical industry a novel about drug research in the Amazon cannot help but engage, folding it into the relationship between Marina and Dr. Swenson, who happens to be her former medical school professor.  Where a less mature writer might have blundered, Patchett excels—rather than freighting her plot with politically correct attitudes, she integrates moral and human reality, so that, as in the novels of E.M. Forster or Henry James, ideology is a dimension of character, rather than character an illustration of ideology.  Novels that sermonize pander to their readers but they also disenfranchise the power of storytelling.  Like Joseph Conrad’s Heart of Darkness, to which State of Wonder unabashedly invites comparison, the novel eschews the merely topical and so accesses the mythic.  Marina is Orpheus to Dr. Swenson’s Prometheus: her teacher wants to create new life whereas Marina wants to retrieve the dead.

Is the attempt to heal merely a preface to destruction?  The Orpheus myth shows that salvation is little more than a second death.  Yet it is a myth about necessity, not morality – just as certainly as Eurydice must be dead, Orpheus must try to rescue her, and he must look back.  This is the paradox at the core of the novel: armed with the knowledge of failure, we hack our way into hell anyway.  The novel is full of small horrors that must be faced: the scalpel that cuts a baby from the womb slices through its eye; a young boy is nearly strangled by a headless anaconda; in Marina’s nightmares, the terrifying crowds of a Calcutta street split her from her dead father night after night.  As in any good adventure story, the mortal danger the hero must face stands for the dangerous terrain of the mind, where our worst fears reside, threatening to swallow us at any moment while always keeping us close within their grip.  And while there is no way out of death, Patchett suggests that our best bet is to stare it in the eye—the final word is for bravery and love, which in the novel amount to the same thing.