A Timely Path to Imagination 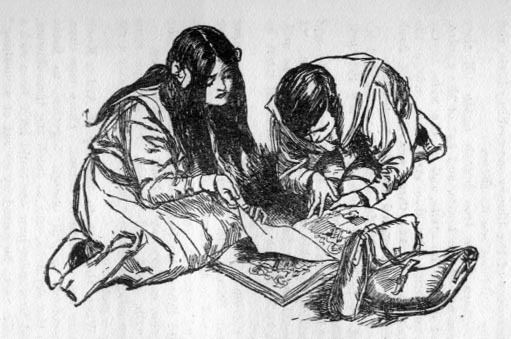 It is all very wonderful and mysterious, as all life is apt to be if you go a little below the crust, and are not content just to read newspapers and go by the Tube Railway, and buy your clothes ready-made, and think nothing can be true unless it is uninteresting. -E. Nesbit, The House of Arden

Not so very long ago, in the cruel morning following the concluding page turn of the final Harry Potter book, children’s novel devotees regarded their devoured bookshelves in dismay. What do I read now? they thought, bemoaning the lack of some hearty new story that wouldn’t shrivel up into a dull, two-sentence summary. The greatest risk at such a moment is that the disillusioned reader will flip distrustfully through the untried pages of the New Books counter, wallow in her return to bitter reality, and turn to the news. But, if a poor muggle resists the urge to catch up with the news rather than to discover a novel, perhaps she will realize that a lack of decent new novels is no excuse for resignation to “fact.” Books time travel quite nicely. And, with the assistance of New York Review Books, a plethora of classic and children’s novels are popping out of the past without even a whoosh of dust.

In 2003, a subset of NYRB began publishing a Children’s Collection composed of previously out-of-print stories for three age groups of children (and an implied fourth of adults who like cloth bindings, old fashioned pictures, and happy endings). The collection is an “attempt to reward readers who have long wished for the return of their favorite titles and to introduce those books to a new generation of readers.” Entirely built of republishings, most of the covers and titles inspire curiousity rather than nostalgia in this young reader, but a few names stick out: The Rescuers (think investigative Disney mice), Robert McCloskey (author/illustrator of Make Way for Ducklings), and Munro Leaf/Richard Lawson (creators of Story of Ferdinand).

Now, modern readers tend to think very highly of themselves and may disdain the writing that previous readers deigned to enjoy. I would recommend against such neoteric pretensions. In fact, I would say it is a very troubling sign of a person heading towards a newspapers-only mindset. Upon feeling such an inclination, such a reader should immediately report to a near, dear, and very wrinkly relation for a proper children’s book recommendation. In the unfortunate case of such a person’s absence, the Children’s Collection should provide for you very nicely. Where to begin? E. Nesbit.

Although E. Nesbit apparently stirred the hearts and sparked the imaginations of many famous British authors, I am neither famous nor a Brit, so I had never heard of her. According to Gore Vidal in his essay “The Writing of E. Nesbit,” Nesbit’s lack-luster popularity in the United States has been attributed by publishers to her “witty and intelligent prose style (something of a demerit in the land of the free) and to the fact that a good many of her books deal with magic, a taboo subject nowadays [nowadays being 1964—decidedly pre-Potter].” Considering the American success of C.S. Lewis, himself a Nesbit enthusiast, I would add that she also lacks a certain obsession with Christian allegory.

What Nesbit does not lack is imagination.

Like several children’s authors of the early twentieth century, Nesbit wrote out of necessity. When her husband, Mr. Bland (can you blame her for using her maiden name to publish?), proved unable to even find two ends to put together, Nesbit began selling stories. She wrote over 60 endings, complete with all sorts of delightful beginnings and middles. Amidst all the stories are a few which deal with time travel. Thanks to the Children’s Collection, one of these clock-trotting novels, The House of Arden, is now accessible (without mildew) to those of us who take pictures with iphones instead of brownies.

In The House of Arden, first published in 1908 and one of Nesbit’s most beloved books, Edred and his sister Elfrida inherit a castle. Because they are orphans, they have many more grown-ups telling them what to do than normal children do. Luckily, one of these “grown-ups” is in fact quite small and delightfully magical: he is a mouldiwarp (a poetry-obsessed white mole). Under the mouldiwarp’s guidance, the children go off in search of the treasure of Arden through all eras of its history. Nesbit brightly encourages her readers to accept her fantastical world by admitting that though it all sounds very strange, it is true all the same:

But, you will say, pigeon noises can’t clothe you in anything…Well, that was just what Edred told himself at the time. And yet it was certain that they did.

As the children begin to outgrow their adventure, Nesbit hints that they may have imagined it all, but leaves just enough clues that, while the adults conclude that it was all a dream, the children know that everything happened just as fantastically as she wrote it.

Written in 1939, just over 30 years after The House of Arden, Alison Uttley’s A Traveller in Time explores a familiar setting: a child traveling into the history of a country estate. Yet, Uttley’s prose aims for an audience more interested in history than magic. This newest addition to the Children’s Collection adopts a dream-like pseudo-realism, confidential and plainspoken. When Penelope Thacker is sent to the country to recover her health outside of London’s cruel air, she becomes entranced by the history of her ancestral home and begins to travel through the veil of time into life as it was at the house in the Elizabethan era. Entrenched in the intricacies of the Babington plot to free Mary, Queen of Scots, Uttley’s novel explores the memories of a place and asks its readers to consider the layers of history our lives are built upon. Though Nesbit also moves through the history of a single house and family, her children are there to learn from the past, not to incorporate it into their identity.

Both Nesbit and Uttley engage with the legacies of Victorian children’s authors such as L. Frank Baum, J.M. Barrie and Lewis Carroll—Nesbit even explicitly references Alice in Wonderland in The House of Arden.  Yet while Nesbit and Uttley use dreams to excuse time travel to logic-ridden adults, they do not bother knocking their heroines out with a tornado to justify their imaginative wanderings.  Unlike Baum’s Dorothy or Carroll’s Alice, Nesbit and Uttley’s protagonists do not need rescuing from the dangerous and absurd world that assails them in sleep. Rather, their increased understanding of history and the outside world empowers them. Their ability to imagine enhances their personality and understanding

For lovers of both fantasy and history, a time travel novel holds a unique and powerful charm. It must be rooted in the present in order to reach into the past without toppling over and landing face down in the dirt. Yet, what becomes of a time travel story when its present has fallen into the past? A time traveling time travel book, shall we say?

Books that have become historical due to age rather than to intent often have a way of rendering what is now history so effortlessly that readers accept that people lived and thought as we do now, rather than as costumed puppets with stilted speech. The contrast between historical fiction and well-aged fiction is particularly evident in these time traveling stories, which offer both the fantastical perfection of historical recreation and a nonchalant commentary on what was then everyday. It is not riding in a sixteenth century carriage that is novel to Elfrida; it is the bumps of one without proper shocks (steel springs being an early nineteenth century invention).

There is no question of the importance of reading adult literature from previous ages, yet children’s novels can feel outdated. For one, while many adults readily adapt to the variations in grammar and vocabulary of an older text, such differences can prove daunting to a younger reader. Furthermore, many stories for children slyly attempt to teach some social mœur. Many of these values have shifted over time, especially in terms of gender expectations, and may no longer encourage behavior that modern adults wish to promote. Would it not be better to solely support the living writers of our own time, who can integrate the best of modern morality into their stories?

Because children’s writing often dances in the current fashion, to cut out a generation of writers would be to remove a genre. The New York Review Children’s Collection encourages readers to appreciate the many voices of an earlier generation’s genius, previously lost to dark corners on a dusty shelf. To read Nesbit and Uttley not only offers the delights inherent in experiencing the treasure-filled attic of another author’s imagination, it also expands the world of already beloved writers of the early twentieth century, from Barrie to Baum to C.S. Lewis. To let such books remain out-of-print and unread is to let an entire wing of children’s literature’s castle fall to ruins.

Although Nesbit addresses the possible disbelief of her 1908 readers, she never hints of any doubt as to their imaginative capacity. In 1964, Gore Vidal had rather less faith. Although British children survive “The Writing of E. Nesbit” unscathed, Americans are found grossly under-endowed with creative possibilities:

As it is, the absence of imagination is cruelly noticeable at every level of the American society.

Rather more recently, Sir Ken Robinson made a similar claim during his TED talk on the state of our schools. Creativity is not just ailing in modern society, it is purposefully stamped out. The current system of education, based on industrial systems and the educational elitism of the enlightenment idealizes the standardization of thought. As Robinson wrote in another article:

We don’t grow into creativity; we grow out of it. Or, rather, we get educated out of it. Creativity now is as important in education as literacy, and we should treat it with the same status.

Without the extracurricular programs at Hogwarts and study abroad programs to Neverland, what would be left of imagining? Most standardized tests don’t even allow a student to make up their own answer! Yet, creativity and literacy are not separate categories—true literacy both promotes and depends on creativity. True literacy involves the ability to see beyond and around the text, to create layers of understanding which overlap and blend into the canvases of innumerable other stories, ideas, and dreams. It is not pronunciation or adherence to grammatical conventions, but the riotous chorus of a thousand visions and interpretations of the world. Creativity of mind is what imbues literacy with value and life. As such, our society needs nothing more than the imagining inspired by Nesbit, Uttley, and so many other half-forgotten names. To rediscover old books is to explore overgrown paths and rebuild toppled towers.

Vidal insists that “though a reading of E. Nesbit is hardly going to change the pattern of a nation, there is some evidence that the child who reads her will never be quite the same again, and that is probably a good thing.”

Such benefits continue beyond childhood. To become a whole person, we do not erase all residue of childhood in order to metamorphose into an adult, but rather build upon that inventive well of hope and curiosity, remembering to replenish it often. Be brave. Imagine.