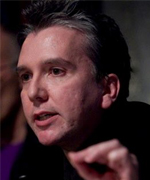 Deleted Scenes (which I used to call B-Sides and Rarities — Deleted Scenes is more fitting though, right?) is a way to feature interesting parts of interviews didn’t make the cut. In this installment Capitalist Realism author Mark Fisher talks about “market Stalinism,” unheralded writers, bureaucracy, and student protests. You can read the full interview here.

One of the more powerful ideas to come out of the book is what you describe as “market Stalinism.” Can you spell out how this functions?

What are the ludicrous features of Stalinism? They are those things that are captured in the famous line that the whole of Russia smelled like new paint to Stalin. We are invited to think that this devotion to constructing appearances, it is not like that now, but it is quite plain that the fact of these surveillance mechanisms is to produce precisely this effect – everything is for appearance. This is one of the things that is widely recognized about New Labour policy. New Labour is supposed to be defining themselves as the furthest away you can go from Stalinism. Yet there is this kind of return of the repressed. It’s coming back perhaps in an even more intense form than it was before, in a sense that at least with Stalinism you did have an actual fucking project to build dams and all of that, whereas with New Labour most of it was just PR. At least with Stalinism there was something in addition to PR.

You got a sense working in schools increasingly that effectively you were working as part of the PR department of the government. Teaching 16- to 19-year-olds, you are required to plan in detail what activities you will be doing with these students 40 weeks in advance. Clearly this is science fiction. It’s not going to happen like that, and if it does you are probably a pretty poor teacher. This disjunct between the world of appearance and what you are actually doing seems to me to be the hallmark of the reign of PR.

Nearly a third of your books have been sold in the U.S. How do you believe your ideas have translated into other political and cultural contexts, given that you generate a lot of your insights from working conditions in the U.K.?

I’ve been slightly surprised that it’s had any kind of audience outside the U.K. since the experiences are so based in the U.K. It’s been translated into Turkish, Italian, and Czech. I’ve recently been interviewed by somebody from Iran. It’s peculiar, but I guess the kind of things I’m talking about have a wider impact than I’d even thought. That has to do with neoliberalism being a global phenomenon. In the U.K. it has been more dramatic than the U.S. in the sense that we’d had quasi-Socialist forms of public institutions in the 1970s, which was not the case here in the U.S. The transformation was more violent perhaps, but in both cases we are talking about the destruction and vandalization of the public sphere by business. The particular tonality of the anecdotes is governed by my experience in the U.K., but the absurdity of trying to run public services or education as if it was a business are apparent to people in many different contexts.

Could you perhaps suggest some writers from the U.K. that U.S. audiences might not be aware of?

In terms of recommending other people, my book came out on Zero books, which is an imprint that I’m closely involved with. Because of the bureaucratization of academic labor, a lot of academic work has increasingly left the public world behind and become very neurotic; very based on having the right footnotes, etc. You’re not really expecting anyone else to actually read it. The thinking behind books being published by Zero Books is to not fall into these traps and have some kind of impactful presence in public discourse. One that I really like is called Non-stop Inertia by Ivor Southwood. He talks about the nature of precarious employment and underemployment. It’s quite humorous, but there is a bitter quality to the humor. He talks about his experiences of not quite being employed. A particularly sad anecdote he relates concerns a time when he’d made the mistake of going to the supermarket without taking his mobile phone with him and was chastised by one of these agencies who said “you can’t expect to get work if you are not available at all times.”

On bureaucracy and “realism:” What I could also see was that these things were not politicized. They were de-politicized, and that is really the “realism” part of Capitalist Realism. People say “Yeah, this is not a political matter, this is not something to argue over, this is just what we have to do to keep our jobs now.” This is just the kind of thing that is sold to us by managers, who themselves would say that it was twaddle and nonsense. Sometimes they would defend it, but often they would say, “We know, you might not like it, but we all have to do this.” I thought, “Well, why do we all have to do this?” We have been told by neoliberals and neoliberal-informed kinds of administration that bureaucracy was an old thing that had to do with Socialism and a centralized state. Well, hold on — certainly for teachers in the U.K., never had they been subject to more bureaucracy than as happened in the last decade.

But that’s not to say that there was not a difference between these new and old forms of bureaucracy, which is that now you have to do it yourself. The role of the Inspectorate is crucial here. Before, the inspectors would come into a college, say every two or three years, and pretty much the rest of the time you forget they are there. But with this new system, the work of the Inspectorate is increasingly contracted out to the college, who would be doing it on an ongoing basis. You’d get this kind of “anticipative hyperconformity” where you think “what are the Inspectors going to say,” and then guess what they are going to say and make sure to comply with it, perhaps more than they would even want. This whole complex of things was one of the major starting points for Capitalist Realism.

On the wave of student protests in the U.K.: What I see most in these protests is an attempt to prevent “reflexive impotence” from turning into apathy. Apathy has moral connotations. Part of the reason that I chose to use “reflexive impotence” was an attempt to get over the sense of things really weighing down on students, which they are aware of, and their awareness makes them even less capable of acting than previously in a perfectly vicious circle. For me the political task was to convert depression into anger, and actually in these protests you can see the possibilities of the conversion of that kind of disaffection into a kind of active anger, which is great.