Confessions of a Literary Aggregator 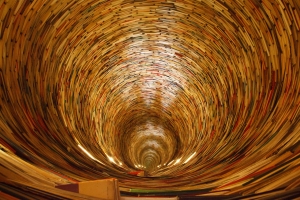 In February I started fictiondaily.org, a website that aggregates online fiction, as a response to Ted Genoways’s claim in Mother Jones that fiction is dead.  In that essay he argues that literature is too esoteric, detached, and specialized to have its former power in public discourse.  In the comments section of the essay editors, readers, and writers of fiction online responded fervently: fiction is very much alive!  It’s all online!

I clicked on the links each commenter provided and found so much literature online that there was no way, it seemed, that anyone–including me–could navigate the online literary community.  There are hundreds of journals updating content monthly, weekly, even daily.  New websites start every day, others die just as frequently.  Given the crash of the publishing industry under the weight of an unsustainable distribution model in 2008, I saw that the commenters were right: the future of publishing is clearly on the Internet.  There are more writers now than there ever have been given the rise in matriculated MFA candidates.  There’s also a huge number of educated (possibly bored) people sitting in front of computer screens browsing the web at work.  But the problem is that there are so many journals and so little organization among them that literature is a mess.  There’s no way to access it.

This isn’t a new problem.  Gottfried Leibniz had the same worries about the newly proliferating printed word in the wake of Gutenberg’s printing press.   When Terry Cochran, in his book Twilight of the Literary, quotes Leibniz’s “Semestria,” I felt like the words addressed the online literary community directly:

The result would be no less than total confusion…in such an undesirable mass of books it would no longer be possible to find and recognize the best in the midst of the bad and the insignificant.

Leibniz was concerned with the negative effect of an overabundance of printed content and worked to create an organization for it instead of letting it get out of hand.   He saw this as the organizing of knowledge itself and our relation to it. He thereby created an order for printed words, the vessels of our knowledge about the world.  This is how, Cochran argues, the organization of the printed word configured modern consciousness.

Leibniz was an aggregator.  Maybe the first aggregator of printed material.  His aggregations of printed material amidst the printing press revolution structured the way we interpret the world.  This is an exciting idea for me.  What if aggregating literary content online could have the same affect on our “figures” of knowledge?  In the quotation from his “Semestria” above, if you substitute “websites” for “books” you’d be describing the situation of online literature right now.  Maybe fictiondaily.org follows in Leibniz’s footsteps!  Maybe literature–poetry, fiction, non-fiction–can once again take center-stage as repository for the collective consciousness, as a mirror for the zeitgeist, as a tribal encyclopedia of postmodern humanity!

Then I kept reading.  Cochran argues that

At this juncture, it is not possible to forget or unilaterally to undo the historical privilege of literary studies and their role as guardian of the paradigm of historical understanding. Nevertheless, it seems essential to come to terms with the demise of the hegemony of Literature as the primary reservoir of humanity’s historical spirit. Writing in print form, and the literature it spawns, will undoubtedly remain pertinent…But that does not diminish the force unleashed by print’s displacement as singular guarantor of the modern configuration of knowledge.

In our current environment of overabundant cultural production, admist our own digital revolution, literature’s role won’t be what it was in the last communication revolution from the scriptoria to the printing press.  Literary studies, Cochran writes, will fall from grace in this new ecology of image reproduction and hypertext.  It will no longer be the vessel for our history, consciousness, or zeitgeist.

Sadly, there are indications that he’s right.  If we entertain Genoways’ opinion (though in these pages I didn’t), it’s clear that literature is specialized, both as academic discipline and commodity.  There are markets for genre books–self-help, memoir, lay-science, etc.–and people are trained to serve these markets.  Writers’ names are commodified to such an extent that a James Paterson novel doesn’t have to be written by James Paterson.  Publishers publish what they publish to sell units, not to aggregate zeitgeist.  In addition, academic departments of literature–creative, critical, and comparative–have sequestered themselves in large part away from the mainstream, separating themselves from what they perceive to be the herd.  One must be a trained member of the club to derive pleasure from what’s considered Literature (for evidence, see the debate Stephen King takes up with Michael Chabon on this score).  This makes literature toothless in the political scene.  It seems highly unlikely to me that a poem or a short story will be the location or occasion for public discourse. Rather, these texts appear either as spineless entertainments or as esoteric artifacts.  Poetry, creative non-fiction, and works of fiction are more akin to painted portraits and melodies written for string quartets than Tumblr blogposts, Facebook updates, Twitter feeds, or YouTube videos.

I’m not saying there’s no value in doing it. It’s infinitely valuable.  I couldn’t live my life without it.  And I’ll keep writing and reading literature like a fiend–I’m just not sure the wide world outside of our specialized community will matter as much as it used to.

There is one hopeful example I can think of that proves the literary novel can still configure our knowledge: Jonathan Franzen’s most recent work ‘Freedom’ gained national and international attention when it was released this fall.   Franzen appeared on the cover of Time magazine and President Obama read an advance copy of the book.  The author then had a personal meeting with the President.  So maybe literature isn’t on it’s way out like Cochran says.

But I think Franzen is an exception rather than the rule.  Before his novel came out Benjamin Kunkel included the following quotation of Franzen himself, in an essay about the fate of the novel:

“Haven’t we all secretly sort of come to an agreement, in the last year or two or three, that novels belonged to the age of newspapers and are going the way of newspapers, only faster?”

He also said in an interview with the Guardian that “it’s doubtful that anyone with an internet connection at his workplace is writing good fiction.”

Oh well.   Maybe I’ll have to get used to feeling like the classical music aficionado and the art buff.  Yes, literature has played an essential role in our history, but it probably won’t be the vessel for it anymore.