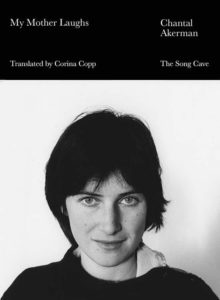 Tr. from the French by Corina Copp

Akerman wasn’t a writer by trade. She’s still most famously known for Jeanne Dielman, a masterpiece of a film she released when she was twenty-five. It depicts in “real time” (the film is a little over three hours long) three days in the life of the titular Jeanne, a single mother whose days are carefully balanced routines: she makes coffee in the morning, she shines her son’s shoes, she cleans and mends her household, she shops for groceries, she cooks a lot of potatoes, and she brings men into her bed for money. Even if the latter detail sounds out of place, it is a movie where “nothing happens,” focused on the everyday in the life of one woman in Brussels.

Most of Akerman’s films play out this way, from her features to her experimental documentaries: nothing happens, beautifully, agonizingly. The shots are extremely well composed and precise and, moreover, long; watching Akerman’s films takes work — or, rather, craft; their composure and their refusal to look away from the banal as equally as the perilous, show that these are really the same thing, requires from the viewer the ability to meditate on a task. They are not passive viewing experiences, nor do they feel incredibly active: they are like cooking,or like many jobs, at the in-between of work and routine.

Reading her memoir, the comparison between Akerman’s writing on the page and her directing on the screen is inevitable. You can find many of the same motifs, the focus on the everyday, the idea of “nothing” happening. “I also love to write what happens even if nothing happens,” she writes. “But something happens anyway, little nothings.”

The memoir is focused on her mother, and her relationship with her. In this way, and because of the circumstances of each project and Akerman’s career, it’s very easy to read My Mother Laughs as a companion to Akerman’s final film, No Home Movie. Both are about Akerman’s mother’s debilitation in her old age, but their framing is profoundly different. No Home Movie is about Akerman’s mother, as purely as Akerman could make it — even when we see Akerman in the film, filming, talking, she is intentionally obscured in every frame. In shots of her sitting with her mother and eating, the camera is behind her mother’s back, so her mother’s shoulder obscures Akerman’s face entirely; later, the camera is behind Akerman’s back, but Akerman has moved herself so her mother’s face is visible, then later moves herself even further out of the way. We see Akerman herself, fully in frame as a subject, twice — arguably. Once in the beginning, where she has set the camera stationary looking through the doorway of a room, she walks into the camera’s frame and is startled upon seeing the camera there, though of course she set it there — she scares herself being the subject of her own shot. And then later, after her mother’s health deteriorates rapidly, after we watch Akerman and her sister try to keep their mother awake from a nap in an agonizingly long shot (where Akerman is, even while in the shot, filming another shot, providing herself another layer of remove), after her mother’s presumed death, the penultimate shot of the film is Chantal on her bed in her mother’s apartment. She is tying her shoes, backlit by a searing white light from the window so, even as a subject, she is a dark and indistinguishable figure. She rubs her face. We hear her crying, but maybe just sniffling, maybe nothing. She closes the curtains but the light in the lens does not rebalance: everything then is dark. The next shot, the last shot, is of two urns.

By contrast, the memoir does what a memoir ought: the author is made the subject. Maybe the form of the written word, not her native mode of expression, granted Akerman the ability to view herself as a subject. Her mother’s same sickness is present still on every page, but the relationship to it is different: where No Home Movie is a film that tries to make itself about her mother and her mother’s illness, My Mother Laughs is a memoir that allows Akerman, and Akerman’s feelings on her mother’s illness, to come to the fore.

So who is the Akerman of My Mother Laughs? Even as the subject of her own memoir, she is somewhat inscrutable — but not just to us, this time. To herself. “I don’t know,” she writes. “I don’t know myself, certainly not all of myself.” This tension, present in No Home Movie as well, of the present-but-absent Chantal Akerman (“We’re closer than before,” her mother says over a Skype call in the movie, “And where is Chantal?”) is one of the driving forces of the memoir. A self searching — finding maybe not a person, not a character anyway, easily definable. It is not dissimilar from her films: Jeanne is who she is because of what she does. By comparison to other uses of the “I” where it inhabits some definable characteristics, Akerman’s “I” is more like an eye, a camera lens — it is what it sees, and what it sees itself doing. The closest we get to definition is provided in dialog by Akerman’s mother, and even then it is not a character trait: “You love long hallways,” she says, “you always put them in your films.” Akerman’s own characterization of herself is a similar refusal: she thinks of herself mostly as a daughter. It is that central relationship, Akerman and her mother, that drives the memoir.

Akerman’s struggle with depression and her attempts at suicide are mentioned throughout My Mother Laughs. On the same page where Akerman’s sister is expressing her concern over jetlag, she says, “When you worry it quickly becomes serious and dangerous for you. And I’m not always there and then when I say something you don’t listen. You say it’s not a big deal, it’ll pass. It does pass, that’s true. Up to now it always went away. But who knows.” Her sister tells Akerman she is “routinely unwell,” and Akerman concurs. Looking at herself as a subject squarely, Akerman writes,

One day I even tried to kill myself but was smiling, pointedly not forgetting to smile, as if it were a gesture without consequence. Luckily it was, since I survived. I have survived everything to date, and I’ve often wanted to kill myself. But I told myself I could not do this to my mother. Later, when she’s not here anymore.

Reading the memoir now, translated into English for the first time six years after its original release, four years after Akerman’s death, I find myself driven by the knowledge that the Akerman on the page is dead. This is probably a driving force of many reading experiences of dead people, even more so the reading experiences of those who committed suicide. As a phenomenon, our reading changes when the person’s mouth can no longer deliver those words — of course it is. But what’s haunting about Akerman’s voice in My Mother Laughs is its premonition: Akerman, in the depths of her depression, the depths of her mother’s illness, seemed to see herself as well as an inevitable death. The voice of the memoir is a wraith. It’s sublime, with all the beauty and horror that word means.

In No Home Movie, Akerman films Skype chats with her mother. When her mother asks why she replies, “I want to show people there is no distance in the world.” In My Mother Laughs, she writes, “Nothing is ever over.” These sentiments together give us something transformative to take away from Akerman’s career: she showed us we can always be together, even when it’s hard, especially when it’s hard, always when it’s beauty. In My Mother Laughs, we as readers are together with Chantal, difficultly, lovingly.

Kyle Francis Williams is a writer living in Brooklyn. He is a 2019 A Public Space Fellow.