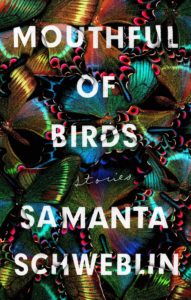 Tr. for the Spanish by Megan McDowell

“The euphoria is uncontainable,” writes Samanta Schweblin in the closing story of her new collection, Mouthful of Birds. “Something emanates from that work and it drives them mad.”  The scene is the climax of “The Heavy Suitcase of Benavides,” a tale of a man who murders his wife and then, stuffing her into a piece of luggage, takes the body to his doctor. Exactly what Benavides expects the doctor to do is unclear, though it is unlikely he wanted the reaction he gets. “It’s . . . It’s . . . wonderful,” the doctor stammers upon opening the bag. “Believe it or not, I know just the person you need.”

The person, it turns out, is an art dealer named Donorio, and his arrival triggers the story’s descent toward its final scene. Naming “the work” Violence, the doctor and Donorio refrigerate it in the garage and invite men from the Museum of Modern Art to install an exhibition. As though rendered a ghost in his own story, Benavides’ attempts to intervene are neutralised by a Kafkaesque futility. His every protest is misunderstood or ignored, his days cut short by sedative pills and unexpected blows to the back of the head. The doctor’s house becomes a maze in which he finds himself lost, wandering with an ever-diminishing hope that some solution can be reached.

Despite his growing confusion, Benavides is forced to attend the opening. “If the public recognises themselves in the artist,” Donorio says, “the work’s effect is magnified.” The crowd agrees, the denouement seeing them enraptured at the sight of the work and its artist, pressing forward in ecstatic abandon toward the grotesque beauty. Toward “the sovereign image of the purple body,” Schweblin writes. “Death a few feet away. Human flesh, human skin. Giant thighs. Coiled in a suitcase. Squeezed into the leather. And the smell.”

Echoing Don DeLillo’s concept of “American magic and dread,” Schweblin’s characters are concerned with awesome sights, be their majesty born of beauty or violence, as though seeking divine forces within the earthly sublime. Because theirs is a world where ambiguity propagates, a fog-like buffer between the characters and their surroundings that disarms any attempt at lucidity and autonomy. A disquieting pull exists at the center of the stories, an inevitable plughole suck from which no-one can be extricated. With agency absent, the characters are reduced to spectators. Viewer of their own tragifarce productions, or riders of a funfair ghost train designed to delight and disturb in equal measure. Because horror and beauty coexist in Mouthful of Birds, like the two sides of a coin sought by every sorry player in a mystifying version of the human experience.

“That’s what literature does in the end,” Schweblin argues in an interview with Electric Literature. “It takes something from the order of the real, and it rethinks it in a way that can produce a certain magic, or a certain darkness, or a discovery.” The stories in Mouthful of Birds can be read as a tour through such “rethinkings.” For example, with its surreal twist, “On the Steppe” holds parenthood as a magical distraction, the desperate protagonists practicing fertility rituals before venturing into the wilderness with nets to catch their would-be offspring. Brutality is the redemptive force in “Heads Against Concrete,” where an artist paints violent pictures to stave off the impulses to commit actual harm, only to find his career unaffected when the sadism re-emerges into compulsive, racially-motivated assault. And then there is “The Size of Things,” a story centering on a rich man who seeks refuge in a toy shop, the character regressing into an increasingly infantile state as the narrative unfolds. The piece positions childhood as the magic and the dread, a liminal space between comfort and trauma from which we want to both escape and return.

That unstable, impossible, and sometimes immoral phenomena hold such an existential meaning in Schweblin’s work hints at the dysfunctional textures of her creations. Opening story “Headlights” finds bride-to-be Felicity abandoned by her fiancé at a highway bathroom, only to reveal that hundreds of such women lurk in the trees there, wailing and crying and devouring one another in lieu of any man to annihilate. “My Brother Walter” sees a successful, happy family transport their depressive brother to every celebration or gathering like a piece of luggage, leaving him to sit and stare as luck flourishes around him. A woman reverses her pregnancy in “Preserves,” the foetus rising onto her tongue the size of an almond. Like Benavides, these are people out of kilter with the world, derailed from any sense of logic and sliding toward some dark terminus with no control over their course.

Built within such an inescapable void of rationale, “Toward Happy Civilization” places the narrator into a nonsense that would surprise even Flann O’Brien’s de Selby or Kafka’s Josef K. After losing his train ticket, Gruner enters a rural station in the hope of buying a replacement, only to be told there is no change in the drawer. A train comes and goes, so Gruner waits, though each time he asks, the same response is given. The ticket officer begins going out onto the platform when a train approaches, waving it through due to the absence of passengers.

Soon, the officer is bringing Gruner food, and then offers him a bed for the night, welcoming him into his family home in the most hospitable manner. At breakfast the next morning Gruner realises his situation is far from unique, other characters are stuck at the house too. These people appear to live a bucolic existence, but a falsehood lies at the heart of their manner, some pull at the corners of their smiles. Gruner plays along but grows determined to catch his train, to re-right his course on the tracks and seal his passage back toward happy civilization. Only, upon incapacitating his captors and making it to the station as a train pulls in, Gruner sees the situation grow stranger. Spilling onto the platform, the passengers reveal they have been trapped aboard for years. Gruner’s freedom is their prison and vice versa. “A final feeling, shared by all,” Schweblin writes in the closing lines, “is of fear: the sense that, when they reach their destination, there will be nothing left.”

Gruner isn’t all that different from Benavides, the characters two variations of the Schweblinian archetype. The person who, in struggling to flee weirdness, inadvertently discovers a more disturbing truth — as though to fight a perceived lack of autonomy is to merely reveal it a kind of perverse destiny. Because the dark suggestion at the heart of Mouthful of Birds is that perhaps the surreal and the strange is in fact the ordinary. That alienation represents not some aberration in normality but normality itself. Immerse yourself in horror and beauty, Schweblin suggests, and you will find not divine grace or salvation, but merely the familiar rhythms of life.

Jon Doyle‘s writing has appeared in Necessary Fiction, 3:AM Magazine, Review 31, Critique: Studies in Contemporary Fiction and other places, and he runs the arts website Various Small Flames. He has just completed his PhD in Creative Writing at Swansea University, where he worked on his debut novel. He tweets @Jon_Doyle.