All My Goodbyes – Mariana Dimópulos 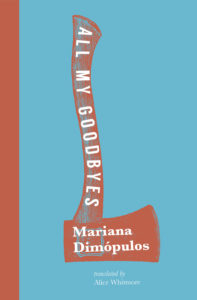 Tr. from the Spanish by Alice Whitmore

In Mariana Dimópulos’s novel, All My Goodbyes, the narrator, an unnamed young Argentinian scientist, leaves her home, her family, and her profession to enter a ten-year period of aimless arrivals and endings. At the end of her travels and at the beginning of the book, she returns to Argentina and falls in love with a man who is gruesomely murdered. The narrative bones of the book, fueled by the twin mysteries of the murder and the narrator’s compulsive movements, are broken up into short, nonlinear bursts composed in an anxious language. The result is a book that masterfully rearranges the novel’s elemental hierarchy, touching  on themes of obligation, globalization, and place. All My Goodbyes is Dimópulos’s first novel to appear in English in the United States, translated from Spanish by Alice Whitmore for the translation-focused nonprofit press, Transit Books. Dimópulos herself is a translator, specializing in German philosophy, and the author of three novellas.

To a transient millennial, the narrator’s physical travels do not seems particularly unusual. She stays in certain German cities for years, although the exact number is difficult to pinpoint as the book deliberately disrupts the reader’s sense of time. Instead of measuring the narrator’s move by days or years, each location is defined by her relationships. By the end of the book, these relationships are “dead names” to the narrator, killed by what she defines as an unhealthy need for motion.

The “dead names,” particularly the European ones, also agree that the narrator’s movement is a problem and seem intent on solving it. Julia, a therapist in Berlin, says the narrator has a “suitcase syndrome,” that could have been cured by Alexander, an abandoned German lover, if she’d taken up his offer to move in with him. She is cursed by her “bad heart,” a phrase that is repeated in the shards of setting-less text that interrupt the narrative scenes. The narrator’s problem, or her alleged cruelty, is repeated so often that by the end the reader believes her and is even ready to implicate the narrator in her lover’s murder.

As the novel orbits around the main mystery, it also rests on a possible origin story for the narrator’s “suitcase syndrome”: her father, also a scientist, who refuses to let the child-narrator believe in the illusion of a body at rest. “Rest is a form of movement,” he tells her at one point, explaining that they stand on a planet hurling through space. She learns to reject her own observations from him, describing him as dedicated to physics with a “ludicrous subservience.” His insistent scientific skepticism has been passed on to the daughter, bleeding into her personal relationships until she is unable to live with illusions of permanence and commitment.

Although the father is presented as the origin of the “suitcase syndrome,” he also employs his scientific knowledge to try to keep the narrator in place. She states, “At seventy-eight years of age, still a physicist and skeptic by trade, he told me that the motion of space was as obsolete as that of ether. ‘Don’t persevere because it doesn’t make sense,’ because no continent, on no planet, did there exist, strictly speaking, a position like the one we were habituated to; strictly speaking, nowhere existed anywhere.”

The narrator lives nowhere existed anywhere not just through her movements, but also through a global marketplace that renders space obsolete. One of the narrator’s most memorable jobs is as a shelf-stocker at IKEA, the clearest nowhere that is everywhere, mass-produced Northern European designs spreading and infiltrating until each home has the satisfying sameness of a highly-rated Airbnb. For years, the narrator follows a businessman named Stefan, whose work and access to technology let him exist many places at once. She watches him work in his hotel room with an envious level of attention. “He glanced at his watch, made a calculation, then extracted the latest piece of technology from his pocket and spoke to it in English, then wrote something in Chinese, greeting and farewelling  people in every corner of the globe…” Unlike the narrator, who struggles for years with German, Stefan isn’t bound by physical location or language, but can seamlessly communicate and work across the world.

Dimópulos’s greatest achievement is the successful break of language from narrative time. Large portions of the book are a form of what the narrator calls a “dreaded introspection,” just a voice speaking from an unclearly defined location. In a lesser work, the voice would feel claustrophobic or confusing, but Dimópulos introduces enough narrative elements and keeps them skillfully in motion, the parts of the books moving around each other in a dense enough orbit.

Dimópulos also successfully reorders the hierarchy of novelistic elements, putting place and voice over time. In an interview with translator Jennifer Croft for the Paris Review, Dimópulos explained, “I wanted to avoid the additive temporal structure of all narration . . . to create a story in which time was not as important as place.” The fragmented structure propels the reader through the new narrative landscape, and giving just enough, so that readers may orient themselves while also working to keep track of the novel’s different pieces. Also, by freeing the narrative from time, Croft points out that the work achieves what the characters cannot, putting the narrator in multiple places at once.

Ultimately, the murder seems to fall in the background, becoming less important than what the narrator thinkshappened as her mind becomes the novel’s primary location. The result is a book where the voices, both of the narrator and the people she loves and leaves, become more vividly present, free of the march of linear narrative time. Dimópulos works directly against one of the age-old creative writing workshop adages: don’t lose your reader in time. Time is one of the tools a prose writer uses to make the meaning of a scene legible, giving the reader enough information to draw cause-effect motivations for a character’s actions. A linear narrative creates a familiar, rational landscape, much like the scientific world of the narrator’s physicist father, a world that the reader can expect to proceed in a predictable way. Without temporal handholds, Dimópulos’s reader must rely solely on the narrator’s voice, drawn into an uncommon space that threatens to break into chaos. A muddier narrative voice would make such a fragmented novel confusing and unnecessarily scattered. Dimópulos’s writing, however, is propulsive in its clarity and energy, creating a novel that both invites a one-session read, “hard to put down,” but is also dense enough to benefit from more than one go-through.

Free of cause-effect assumptions of a linear narrative, the narrator’s moves seem less capricious or confusing. Instead of looking for a string of actions leading to conclusive event, the focus is drawn to the narrator’s impulses which work as a gravity that holds the book together, circling around a mounting, imminent violence. Whether the narrative ever reaches some climatic peak is not ultimately important. The force pushing the narrator forward is the only thing that truly matters.

Alyssa Songsiridej is a writer and editor living in Cambridge, MA. Her writing can be found or is forthcoming in StoryQuarterly, The Offing, Columbia: A Journal of Literature and Art, and QWERTY Magazine. Her work has been honored by the Ragdale Foundation, the Virginia Center for the Creative Arts, the Vermont Studio Center, and the Ucross Foundation. She is also editor-in-chief of Storyscape Journal.