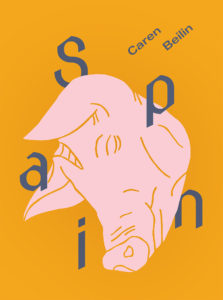 I don’t know from personal experience whether writing residencies are, as they would seem to claim, a particularly productive space. I don’t know whether they truly offer the writer time and space to set aside first-order life concerns in favor of pure devotion to the project at hand. What I do know from personal experience is the fear of the blank page. And I can imagine that fear amplified in such a place, surrounded by fellow artists, by resounding boredom, by all the contingent pressures, both external and internalized: the pressure to produce, to produce something worthy of the designation “art,” to produce art that confirms a hierarchy of aesthetic valuation that pre-dates the artist, may nothing to do with the artist, much less with what she might want or need to say.

In Spain, Caren Beilin relates her experience at an artist residency in Aramingo, Spain in 2011. On the surface, Beilin’s time in Spain is a disaster. Rather than gaining a clear understanding of her work — the project that would go on to become her debut novel, The University of Pennsylvania — she is instead confronted with all that stands in its way. Rather than some romantic communion of artist, art, and place, this memoir is a record of all the noise that overwhelms the blank-page silence: a destructive interference pattern of longing and regret, regrettable men and literary baggage, in which we find artist, art, and place at odds. Innumerable are the intrusions upon Caren’s physical and mental (work)space: from fleas and dyspepsia, to the all-pervading “male interruptus,” her term for a genre of blathering, constitutionally-arrogant man, so eager always to “heart of darkness your whole goddamn time . . . [to] publish himself on the back[ ] of your nodding face, for hours.”

In failing to provide her with the material conditions she requires to write, the residency fails her at the very most basic level. Beilin’s demands are more modest even than Woolf’s: not a room of her own but a desk. Simply a desk where she can sit and see and feel her way to lines like: “The aurora and the setting sun dropped an utter butchery of marigolds through the fallen tower of the castle just outside, and then lit the yellowy blood.” This need is one that is not met, or met only rarely and through great struggle. Aramingo’s official “artist’s space” is infested with fleas — fleas which Caren is alone in perceiving. Though she carries evidence of it on her arms — in bites, and later, in scars — everyone, including a doctor, dismisses her claims. In light of this “flea conspiracy,” Caren protests the designated space and remains at the house, where she must battle the other residents for possession of the dining table. To get her book out, she has to claim this table for her own and goes to extreme lengths to do so. “I’d stay all night,” she writes, “to have my desk back in the morning . . . [I’d] write all evening . . . write nothing, the same sentence again, like The Shining, just to keep the reservation.” To make her art, she must become territorial and strange. More than selfish: a madman.

Instead of finding community among her fellow artists or drawing inspiration from her setting, Caren engages in something like anti-immersion. At her desk, she takes in French literature, French film. She re-reads Madame Bovary, taking refuge in the paradoxical non-space of books: “Paper is nothing,” Beilin writes, “no place, Utopia: what that word actually means.” In Spain (in Spain), the author thinks about America; she thinks about her mom, her dad, her exes. She thinks about Stanley Kubrick. In short, she is several strains of homesick at once. “I wanted to leave (always) immediately,” she writes, and elsewhere asks: “Does it matter where I was?” While the title of this memoir implies a travelogue, that Spain is not. This city and its culture have not infused Beilin’s prose, though the narrator is acutely aware of — and oppressed by — this expectation. Namely, that “a guest should be eager, the enthusiast, compliant and linguistically a porous person if foreign.” A fellow Anglophone whom she dubs “The Prick” serves as a foil in this regard. A writer for Esquire, The Prick interprets and consumes (read: appropriates) Spanish culture with great alacrity. By contrast, the narrator observes: “I knew only that this town in many ways was always fucking me over.”

At first glance, what Beilin gives us here seems to be self-mockery. This Caren is needy, impatient, and longing for the various, familiar comforts of home. A hot shower. Coffee. Stable wifi. Pharmaceuticals. Rapid electronics repair. What a tourist! What an American! This very American dissatisfaction is, on its surface, amusing. In the context of an artist residency — in the context of art — antacids and chargers seem trivial, their lack laughable. But the narrator’s homesickness becomes decidedly less amusing in light of the larger argument this book makes about gender. Namely, that the woman (writer) is a tourist, a foreigner, in a (literary) culture dominated by men. Beilin returns again and again to the double-standard that restricts what and how women can write: “A woman has to be interesting, or mean something soon, or explain herself or demean herself or be sex to be read, or heard. How crucial you have to be, if you aren’t one. A man.”

This town that is “in many ways . . . always fucking [her] over” is not Aramingo, in other words; it is the publishing industry. It is the patriarchy. No, it does not matter where she was. And anyway, she writes: “I couldn’t be there, I was here.” She makes that “here” explicit, visceral (literally), as one of Caren’s main barriers to immersion is that she cannot consume the culture. She cannot digest it. The meaty cuisine tears up her insides, leaving her with a “gut . . . like a knife aquarium.” Unlike The Prick, she cannot write in Spain or of Spain because she cannot get outside of her body. She cannot get out of having a body, of being a body, a body “beeflogged,” a body desiring, desired, weighted with memory. Beilin explores the many ways that violence in particular can be recorded in the body, repressed pain broadcast in movement. “What anger transmits to the percolator when you are done with it,” she asks of a fellow visiting artist whose habit of overtightening the coffee pot intrigues as much as it vexes her. “What happened to you?”

While the author may deride the notion that writing must be “crucial” to be read, Spain does nonetheless invoke a discussion that is more than ever necessary at this time in our country’s history. What constitutes assault? Violence? Abuse? How can we talk about it? Why don’t we? “When [the] man touched my crotch, I didn’t think ‘I like this,’” Beilin writes of one incident that speaks to a wider cultural problem. “I couldn’t throw him off, though, or make a big point. I was a dependent, the guest.” Much of the book circles around another particularly troubling interaction, this one involving her father. The recurring sections titled “Nipple” are a formal illustration of the way this traumatic memory persists. Again and again, she replays the episode in the hope that she will turn up some “proof,” some incontrovertible evidence of offense. “I am not lying,” Beilin writes, “but I don’t know what happened . . . I don’t remember it quite.”

This book could scarcely be more personal, more political, more powerful in merging the two. Her dead-ended exchange with a man she calls  “Dr. Money,” for instance, is a striking corroboration of Beilin’s assertion that a woman “[has] to be sex to be read.” This man, whom she originally met on a plane and emailed for years after, abruptly loses interest and stops answering her, as the “coquetry [she had] exhibited on the plane” is replaced with “depraved and competent artistry.” Clearly, one concludes, this man did not want to engage with a smart, young artist, capable of dedicating herself “like a mule” to work; but rather with this woman, this woman-body.

Applying her feminist lens to the writing of Jean-Phillipe Toussaint, Beilin also notes the violence inherent in even the notion of literary excellence: “I hate his writing. It has all the restraint of good writing, pooling all the restraint and commanding it, to restrain, what you or I could do, too.” Naturally, this also leads Beilin to an interrogation of her own taste — itself a consequence of her acculturation into a literary tradition based in (oppressive) binaries like good or bad, weak or strong. How can it be, she wonders, that Duras’ The Lover is both a failure and a resounding triumph? “Despicable weakness, Marguerite, to end a book like this,” she scolds, even as she admits that this weak ending — this “deadening cliché,” which all her training tells her is bad writing — moves her to weep.

While Beilin’s narrator, in Spain, confronts and struggles with this binary, the memoir that grew out of her time there offers ample alternatives. Of her mother’s multiple sclerosis, for instance, Beilin writes, lovingly, of a sort of strength in frailty, strength that is in fact a consequence of weakness:

Her] body numb and exhausted and nonfunctioning from MS . . . She had forsaken many things in her life, and had to become this punk, to be punkrock about all the rest — it’s punkrock for some to go alone like that to the bathroom. To live alone. To leave your husband when you’ve lost the ability to walk, to roll out the door (so weak).

Beilin’s prose is punkrock — unrestrained, freed from whatever pressures Toussaint’s writing, by its very existence in print, might impose. Unlike the “nouns and verbs” school of writing, there is no headlong movement toward meaning. Rather she opens up, through her use of tmesis, a sense of unpredictability within the line: “My heart was beating. When we stopped biking, the bikes broken, I could hear it had gotten like raccoons into everything.”

While Aramingo is a debacle and Beilin’s attempts to write there are endlessly thwarted, this ostensible failure is, in another sense, a triumph. To fail to write in Aramingo is to find a way to write in this world. The memoir tracks the fraught journey this young writer must embark upon in service of her art — much like the bike rides she takes while the rest of the town siestas: uphill, oppressed by heat, a genre of protest. The space Beilin did not find in Spain, she reclaims in Spain. As she puts it: “Bildungsroman, you’re not nice.” Indeed, Spain is anything but. It is gutsy, incisive, unguarded, uncomfortable. It is something exploding.

Emily Alexis the Fiction Editor at Noemi Press and also edits fiction at The Collagist. Her work has appeared or will appear in Juked, The Offing, Heavy Feather Review, Denver Quarterly, and Tupelo Quarterly. She lives in Harlem.