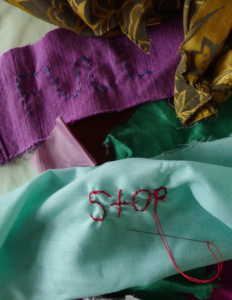 Odysseus tied to a post—this is perhaps the most paradigmatic and primal scene of the limits of listening, or more precisely, of trying to listen past one’s limits. So cleverly restrained, Odysseus tries to know what should kill him. Literature—that is, fiction—takes shape via Odysseus’s trickery: The song can be heard, but Odysseus’s bindings foreclose from the start the fulfilment of the desire it opens up. Out of Odysseus’s crude hunger for an experience he should not be able to live with, aesthetic distance is born—that boundary, which makes it possible to encounter the truth without disappearing into it.

Listening is frightening if it feels as though that distance, which Odysseus maniacally policed, might not hold. In such a case, the listener disappears, and listening ends. But listening might never begin if the terms are decided in advance, and not by consensus.

If Odysseus, lashed above the water, listening without thus succumbing to dissolution, is a figure for one type of aesthetic experience, modern psychology, plunging in, gives us another model. In 1954, neuropsychiatrist John C. Lilly developed the isolation tank in order to experiment with the effects of sensory deprivation on human consciousness. In the isolation tank one floats surrounded in salt water at body temperature, in blankness and in silence. Here, one hears their own blood pumping, breath blowing: the sound of the body which one is, it’s finitude. But here also is a kind of transcendence of limits. The edges of the body start to shimmer and one begins to hear things, to sense things that weren’t there before: Are they hallucinations? Are they something else, something hitherto imperceptible? Here we see an attempt to break apart the boundaries of the self, in a way that attracted artists of the 1950s and 60s interested in merging art and life, heedlessly listening to the song of the sirens, breaking the space between work and audience, listener and listened to.

Odysseus and Lilly are two strangely proximal instances of the psychedelic optimism that experience and perception can be opened up and extended by subjecting oneself to various constraints. In the afterward to his 1979 book Modern Tragedy the British literary critic Raymond Williams spoke from the other side of this optimism, describing a new social reality devoid of hope, marked by “the slowly settling loss of any acceptable future.” There was certainly plenty to be bummed out about in Thatcher’s Britain, which radiated a no-hope, no-future ideology (TINA, There Is No Alternative) as the pathetic successor to Britain’s imperial legacy. But perhaps if Williams listened a little closer to the stirrings of the 1977 generation, with punk, no-wave, and the invention of the LED screen, he might have heard a different mood reverberating out of this lost future—irony, much more the mark of the comic than the tragic. Maybe there is nothing slow about the loss of the future and maybe, as Lauren Berlant argues, optimism and hope can have a cruel streak that a little ironic distance could challenge.

“There is a direct link between listening and life, perceivable in its absence,” Anna Vitale writes in her essay “The Tenderness Junction.” “What we cannot say and what we cannot hear matter.” We have organized this quarterly into two sections, Limits and Listening. Aside from the alliterative appeal we see in these essays and conversations an important connection between these two themes.

Once a limit is recognized or overcome—say the ability to connect across great distance with satisfying intimacy, or the recognition that that satisfaction is something distance cannot meet—then you are on that precipice of the future that Williams and the 77ers render in their own ways. In his essay on the curious obsession with immortality amongst the tech-capitalist elite, Sam Rowe argues that the possibility of transcendence that death reveals has proved too tantalizing for reformers or men of ambition (and it has been primarily men) across the ages. This issue takes shape around such a desire to stand on both sides of the fence, of life and death, or as Josh Davidson explores, of the secular and the sacred. Another response to this desire might be the sort of irony that Adam Fales finds in listening to David Cohn’s metafictional albums.

Listening is simultaneously a means of transcending limits and of understanding where they lie. When we listen we hear what is beyond us, and the sounds that our actions make as they reverberate. When we listen to other people, we have the opportunity to hear something we didn’t expect, something beyond our perspective. Finbloom and Mashihi experiment with conversation as a form, placing limits as a strategy for saying something else, creating a space for honesty, intimacy, and discovery.

On the other hand, listening is a way of realizing limits, a way of accessing the intractability of the real, beyond fantasies of freedom. In Matt Jakubowski’s critico-fictional book review, reviewer speaks through imagined reviewer, listening to the book while pushing the limits of critical perspective. M. Lynx Qualey’s essay shows how the stories told about the Iraq war limit our perspective—pointing to other stories, the stories where “we” Americans do not speak, do not even necessarily appear as significant, rounded characters, as those in which the reality of the war is most forcefully articulated.

These two aspects of listening to limits are connected. In both cases, listening is about an encounter with the outside, with the other. It involves humility because it involves receptivity. When one listens, one opens oneself to the world.