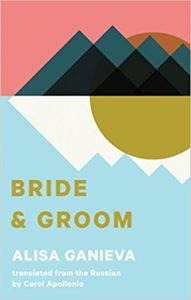 The first chapter of Alisa Ganieva’s Bride & Groom ends strangely. Patya has spent a night engaged in activities recognizable to most Western twenty-somethings: after a week of underpaid, semi-professional work, she rides the train with a couple of friends, regaling them with stories of bad dates and boorish men. They end up at a house party, and Patya accompanies Rinat — a quiet, shy seeming man — upstairs. To Patya’s dismay, Rinat soon climbs on top of her. Rinat’s advances are unwelcome and Patya is soon enveloped with fear:

A chilling, numb terror crawled over my skin, but my head was completely empty. I sank back and lay staring up at the ceiling. Rinat pressed down on me from above and lay there, also motionless except for his calm, deep breathing . . . From afar, I felt the shallow trembling of my body.

At this point, I thought I knew where this scene was headed. And I figured I knew exactly what kind of book I was reading. I couldn’t have been more wrong on both counts.

Rinat does not assault Patya — he gets off her without attempting anything — but instead begins telling her a variety of odd things. He says that her “mountain spirits” have “overpowered” his “river ones.” He wonders if an annoying man downstairs, who has claimed to be a god, might “have drunk some wine and come to know the truth.” Eventually, Rinat starts yelling at Patya: “Your hair is covering your face. Get rid of it, get rid of the hair! . . . Free yourself of it. Hair is multitude. Multitude hides the face of the One.” The peculiarity of Rinat’s words creates an unnerving impression on the reader. This is decidedly not a “young people move to New York” novel set in Moscow, as the first few pages of the novel suggest.

Ganieva is the first novelist from Dagestan to be published in English (her first novel, The Mountain and the Wall, was published by Deep Vellum Publishing in 2015). She caused a commotion in 2009 when her debut novella won a literary prize in Russia. Part of the scandal had to do with the fact that she published the novella under a male pseudonym and remained secretive about her true identity until the award ceremony. Perhaps the more important element in the scandal had to do with her portrayal of Dagestan, which pulled no punches in its description of the social and religious changes taking place there. Ganieva received death threats and was accused of betraying her society.

Dagestan is a small, mountainous region in Russia’s North Caucuses, near Chechnya. Dagestan is Russia’s most ethnically and linguistically diverse region (with over 30 languages spoken by its population of under three million). Since the fall of the Soviet Union, two sociopolitical developments have characterized the region: the rise in political corruption and the increased influence of fundamentalist Salafist Islam. Both of these changes have led to an upsurge of politically charged violence, a context that is important for understanding all of Ganieva’s work and the impassioned response it elicits.

After the opening chapter, Patya returns to Dagestan. Returning home from Moscow at the same time is Marat, a young lawyer currently working on the case of a murdered human rights activist. The novel alternates between their perspectives. Though young by American standards, they both face family pressure to marry. Patya’s mother tells her she is hopeless, destined to become an old maid (Patya is the advanced age of 25). Marat’s family reserves a banquet hall for his wedding reception, though Marat is still single. We soon understand that Patya and Marat will meet and fall in love. They are the titular bride and groom.

Though this is the basic plot of the novel, Ganieva smuggles a more ambitious set of goals in with this romantic storyline. Rather than crafting a character study or a love-at-first-sight romance (though the novel includes elements of both), Ganieva attempts to encapsulate Dagestan’s complexities, interrogating its customs, politics, and religion.

Ganieva has set a difficult aesthetic task for herself. She wants her novel to be expansive (and wants to include the stories of countless characters spanning generations), yet stick to the close point-of-view of either Patya or Marat. A scene two-thirds of the way through the novel shows how Ganieva cleverly solves this problem. After Patya has a confrontation with a suitor named Timur (a hilarious character who is equal parts wrestling enthusiast and political operator), she lingers outside, noticing a vacant house across the street. She thinks about the house’s previous occupant, a “passionate bibliophile” and her former literature teacher. Patya’s thoughts drift to the woman’s father, an engineer who was accused by the Soviet Union of giving secret data to capitalist spies in the 1930s, and subsequently tortured. Her memories of the teacher and father give way to thoughts of the “childless deaf couple” who live in the next house over, and then the fundamentalist Salafi family in the next building. In this family, the women wear hijabs, “concealing from view even their sharp little chins,” a clothing choice that makes the neighbors — including Patya’s granny — suspicious of the family. After a couple pages of such ruminations, Patya returns to her house where “chattering neighbor women and Granny” spend their time eagerly sharing “the latest gossip.”

This scene serves as a representative example of the novel’s style, and gossip is key to that style. In important ways, Ganieva’s writing mimics the chatter and gossip of the townspeople. Ganieva often interrupts dramatic moments in the life of her main characters to interject the stories of people from the community who we never hear about again, a meandering style reminiscent of kitchen-table conversation. This is not meant as a criticism, or to suggest that this style is unsophisticated. In fact, Ganieva’s use of this style is what allows her to pack a seemingly conventional love story full of anecdotes of societal conflict, hinting at the violence that is never far from mind in Dagestan.

Vital to most of this conflict is Khalilbek, a character who — like the novel itself — keeps transforming, defying our expectations and assumptions. At first, he seems unambiguous: a corrupt and formidable politician. He is “omnipotent, omnipresent . . . everywhere at once, in every imaginable office” controlling “the entire real estate market” and “the government officials of every rank and role.” With this much power, it comes as no surprise that Khalilbek’s reputation is checkered with stories of violence and fraud. This includes murdering Marat’s neighbor and half-brother, erecting a casino (which has, some say, corrupted the town’s youth), and cheating Marat’s father out of his ability sell some profitable stocks. For crimes like these Khalilbek is imprisoned, though how long he will remain so is a matter of debate. The townspeople devote much of their gossip and speculation to Khalilbek, trading stories about him “like ghost stories told to frighten children, with a mixture of half-belief and suppressed excitement.” As with many other powerful, corrupt figures, Khalilek elicits a passionate loyalty that seems driven by fear.

It is tempting to view this loyalty as naïve or loathsome, given the vile actions the townspeople must overlook. For most of the novel, Marat views Khalilbek as greedy and debased, and, given that Marat is one of the protagonists, the reader is inclined to share this view. Yet, as with almost every other aspect of the novel, Ganieva undercuts this simplistic interpretation of Khalilbek. Near the end of the novel, Marat meets a man walking near the prison, hiding a bottle in his dingy clothes. The man offers Marat a drink and he feels strangely compelled to accept. Throughout their short conversation, the man reveals that Khalilbek has been released from prison, and, after Marat expresses his dismay with Khalilbek’s past actions, explains the motives behind Khalilbek’s transgressions: Khalilbek killed Marat’s half-brother because he was on the verge of becoming a terrorist; he erected the casino because he knew it would then be closed and turned into a children’s arts center; and he did not allow Marat’s father to sell his stocks because he knew that he would be murdered if he became rich.

This conversation leaves us suspecting that the drunken man is, in fact, Khalilbek. It also reveals Khalilbek to be something more than a corrupt local politician. He becomes instead a mystical, unfathomable figure whose “omniscience” is not a metaphor but a literal knowledge of what is happening at any given place in any given time.

This revelation is intriguing yet unsettling. What does it mean for Ganieva to choose a corrupt businessman as the novel’s mystical figure? Are Khalilbek’s crimes justified? Was it right for him to kill a young man because he was destined to become a terrorist?

The novel’s ending leaves the reader with even more questions, as the marriage plot fails to reach a satisfying (or unambiguous) denouement. But the slipperiness of the novel — the way it dodges our attempts to grasp it — is the point. It is a result of the influence of Sufism, a mystical tradition in Islam that has been prominent in Dagestan since the Middle Ages. As Ganieva explains in an afterword to the novel, Sufism is about the search for “complete knowledge of being,” and involves the renunciation of “all rationality and logic,” the freeing of oneself “from anything individualistic” including “from one’s own self,” in order to access “Divine Unity.” Though Ganieva herself grew up in a nonreligious household, she invokes the Sufi tradition because — unlike its fundamentalist, literalist counterpart — it allows for ambiguity and negative capability, for change in people’s perceptions, and for good and evil not to be simple, discrete categories.

Throughout Sufi writing, wine has been an important symbol. The unencumbered thought process one has when drunk models the search for knowledge. This explains the repeated connection between drunkenness and knowledge throughout the book (we might think back to Rinat’s proclamations at the beginning of the novel, or the words of the drunken man to Marat). It also indicates why the novel often feels like trying to have an important conversation with a friend after one-too-many cocktails: the process is eminently enjoyable, the bonhomie is pleasurable, and the next day one will remember it fondly, though the exact details of what commenced may be lost in a haze.