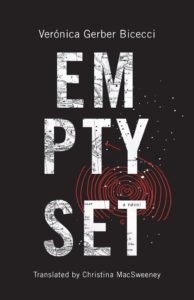 Empty Set is the first book from Verónica Gerber Bicecci, described as “a visual artist who writes.” It is an experimental, fragmented novel, expertly and artfully translated from the Spanish by Christina MacSweeney. The prose, while fractured, features carefully regulated sentences — this is a tightly constructed text with very few physical descriptions: the characters are unimaginable bodies, sketched out only in dialogue and relationship to the narrator. The emphasis, then, is placed on the compelling illustrations that abound between the snippets of writing. Gerber Bicecci’s narrator tells a story out of chronological order, of a few failed relationships, romantic encounters, a job as an archivist. The essential plumb line of plot is scattershot with traumatic bits of past that poke through: the narrator’s parents moved to Mexico City to escape dictatorship in Argentina; her mother wordlessly vanishes and leaves the narrator and her brother behind. As the narrator gets a job piecing together the scraps of a dead woman’s life, we are given this book, performing the same archival work with her illustrations, vignettes and observations, all bound as a stack of shuffled index cards.

It is unclear exactly how much of the story is told out of order, as we encounter people, pets and places, and are then later introduced to them as though for the first time. We see numbered “Observation Sheets” appear occasionally in the text, but it’s unclear how many there are total: we are given Observation Sheet III on page 17, and Observation Sheet I on page 125. It’s unnerving to realize that you are actually getting fed fragments, but the narrator has her own thoughts on that, as she struggles to piece together her mother’s disappearance and how it has affected her: “Only a series of scattered, meaningless clues. A set emptying out little by little. Disordered fragments. Correction: shards.” The story seems to be told out of order because the narrator is unsure where exactly she should start — so every disjunction in time might even be considered a new beginning. In another parallel of the book with her archival work, she writes, “Beginning the same text many times is, at the very least, an insistence on telling and understanding the same story. In any other way, you fail time and again, beginning different stories that always end the same. In any other way, you fail over and over, attempting to disorder time.”

Empty Set employs a number of stylistic quirks, chiefly among them that it features frequent hand-drawn diagrams. These illustrations are all in black and white, and they accompany and build on the text in curious ways, sometimes even slyly contradicting it: “Hardly anything was visible” is followed by an extremely detailed if somewhat inscrutable drawing of a wall seen through a telescope. In the written words, character names have signifying initials bracketed in parentheses so they can then be identified in the various diagrams. The drawings and diagrams offer methods of making sense of relationships in a non-formulaic, non-verbal manner: methods that take shapes, can change and adjust, be scaled while being accurate. Indeed, the insistent use of these diagrams to describe her relationships, to the world and to others, forces language to admit its inadequacies and deficiencies.

The shapes and labels seem much more efficient in handling the complexities of the narrator’s life, and her Venn diagrams are curiously evocative in unprecedented ways: “When two people share a secret, they look more or less like this.” She describes the tumultuous breakup that seems to act as the catalyst for the book as such, accompanied by Venn diagram illustrations labeling herself, her lover, and her lover’s lover: “Once upon a time there was an intersection called IT. Suddenly, in the IT intersection, a void appears. In fact, the void is a symptom of intersection TH, which I can’t see. Then T moves away with H, and I is left with the hole. I am I, Tordo is T, and H is Her.” Her textual description interrogates diagrams and the shapes that comprise them as spaces that she and others can somehow physically inhabit: can you see, from your circle, the person in the other one? Is the intersection of two circles a blind spot? Is every diagram on the same plane? Is a hole created as easily as inking in a circle?

The novel moves in a circular fashion, revolving around certain fixations, themes, concepts: dendrochronology, the study of tree rings; astronomy and telescopes; geometric shapes. But these strange, seemingly unconnected other obsessions are unified by the ways in which the narrator takes and warps them into variously extra-linguistic methods of meaning-making. Always there is an emphasis on language and what it can and cannot accomplish: “Trees write in a language that can’t be seen. Wonder what my life would look like inside a tree trunk, what all those lines, knots and circumferences would mean. Wonder how a set of truncated outlets, an abrupt ending, or a disappearance would be written in that language.” The narrator’s ruminating is melancholic, as she must continually return to language to express her thoughts, despite the fact that it seems to repeatedly show itself as inadequate.

She is data-driven by inquiry into other techniques, what forms of logic might render her life legible. How might the events of one language be conveyed in another? And would that make them more understandable? One of her observation sheets describes a mother and son doing yoga together in the park, with accompanying drawings of their poses, which taken all together create the appearance of hieroglyphics: “Their bodies form letters, but the message is indecipherable.” Curious, the subtle difference between a meaningful letter and a mere shape, especially given how much she relies on shapes to craft her diagrams. We are given a sliver of insight into the narrator’s choice in using these illustrative expressions: “Venn diagrams are tools of the logic of sets . . . Visualized in this way, ‘from above,’ the world reveals relationships and functions that are not completely obvious.”

And here the Venn diagram of her language and her drawings comes into focus, merging and forming the space that is the most crucial element, being the negative between the two. At one point the narrator comes across a series of photographs with people’s faces cut out of them, and is interested in the hole left behind, in what the photograph is now. Her remark plays with the difficulties of positive and negative space, calling it “a hole cut out from some place.” How do you render negative space, and if you can accurately describe it, is it really negative? Gerber Bicecci revels in these quandaries and pushes them through all manner of expression: visual, mathematical, linguistic. She writes: “There are things, I’m sure, that can’t be told in words. There are things that only occur between the white and the black, and very few people can see them.” Pushing her illustrations to describe difficult things calls to mind how much else they actually evoke: whorls, voids, eclipses. Every word on the page is a Venn diagram: the meaning might be found in the space between what is and isn’t written.